This is the best way to make homemade cinnamon sugar. Perfect for dusting buttered toast, encrusting french toast or rolling muffins in. There’s a million different ways to use this spiced sugar; sprinkled on buttered toast, tortilla chips or chimichangas. You could encrust your french toast, swirl it into pancake muffins, coat almonds in it, roll pumpkin or nutmeg spiced muffins in it. And that’s naming just a few.

And yes, there is such a thing as a perfect ratio. You can’t just go throwing the two in a bowl and calling it good. To Make Homemade Cinnamon Sugar You Will Need: Measure and 1/2 cup of granulated sugar and 2 tablespoons cinnamon into a bowl. Whisk together until there is no more lumps. My sister (Hi Julie!) game me this baby whisk attached to my Christmas present just this past holiday. She told me she thinks it’s an ornament. No way! It’s a spice whisk now.

Although this is called cinnamon sugar (and not sugar cinnamon 😉 ) I can understand that some may want a more mild cinnamon sugar. Try using 2 teaspoons cinnamon (in replace of 2 tablespoons) for a subtle cinnamon flavor.

Don’t forget to check out my other spices and seasoning blends! Enjoy! And if you give this Homemade recipe a try, let me know! Snap a photo and tag me on twitter or instagram! 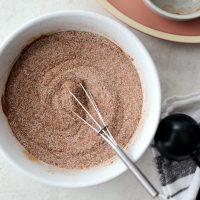 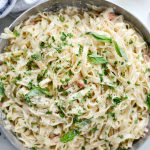