From the popular blogger behind Simply Scratch comes a debut cookbook of easy and accessible family recipes — the new bible for cooking with whole foods.

For Laurie McNamara, growing up on a farm in the country had major perks: her mother cooked with vegetables from the family garden, they collected fresh eggs from the chicken coop, and absolutely everything—from ketchup to casseroles—was made 100 percent from scratch, with whole foods. When McNamara moved away from home, though, she found herself too busy to prepare from-scratch meals, between working full time and raising two kids. Like most Americans, she relied on boxed brownie mix, canned soup, bottled dressings, and frozen dinners to make home cooking quicker and cheaper. But she soon learned that these so-called shortcuts were in fact both more expensive and light-years less healthy than simply making everything herself. Eventually, she’d had enough and vowed to remake her kitchen into a from-scratch kitchen. Now, five years later, McNamara has helped hundreds of thousands of home cooks prepare from-scratch meals with whole-food ingredients through her blog, Simply Scratch.

Simply Scratch will be the must-have bible to cooking beyond the box and can. Featuring a down-to-earth approach and family recipes that use everyday ingredients, Simply Scratch proves cooking from scratch can be affordable, simple, fun, and—of course—absolutely delicious.

Here is where you can pre-order:

A HUGE thank you to those who’ve pre-ordered! Your support means the world to me. I’ll be continuing to update this page with all things book related. For those who are interested on the backstory of how I was so fortunate as to write this book- here’s my story!

**Pre-Order NOW (at any of the above links or on QVC) and receive a FREE 10 Easy Dinner Recipe Bundle download! Read more about this offer HERE! ** 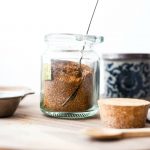