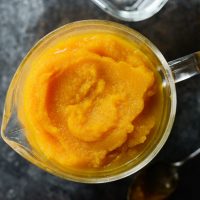 Skip the can and make your own pumpkin purée from scratch! It's easy and only takes a few hours to roast and puree!
Prep Time: 10 mins
Cook Time: 40 mins
Additional Time: 10 mins
Total Time: 1 hr