Simple and elegant, this Pomegranate Bourbon Glazed Ham is no doubt a show stopper. Ditch the glaze packet and make your own homemade sweet and boozy glaze this year, you won’t be disappointed! 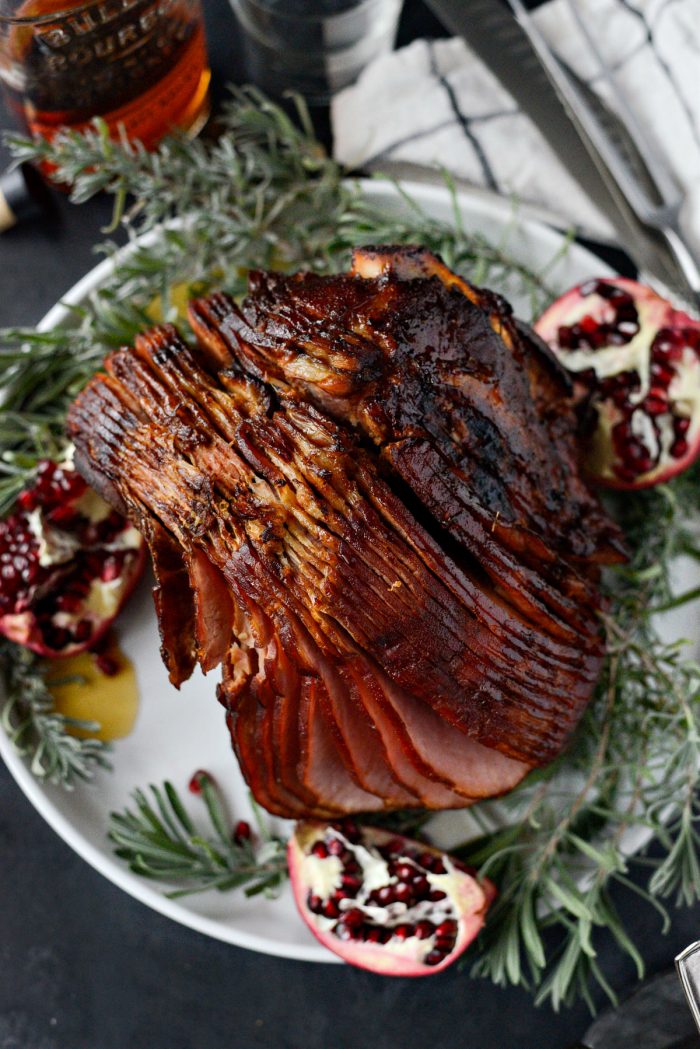 Obsessed doesn’t even begin to describe how I feel about this ham.

First off, the color is gorgeous. As the boozy glaze caramelizes on the outside of the ham it turns this gorgeous deep burgundy. And the flavor? Ridiculously good. The sweetness really compliments the saltiness of the ham nicely and you get the ever-so-subtle hint bourbon flavor.

My girls both agreed that our house smelled like Christmas. 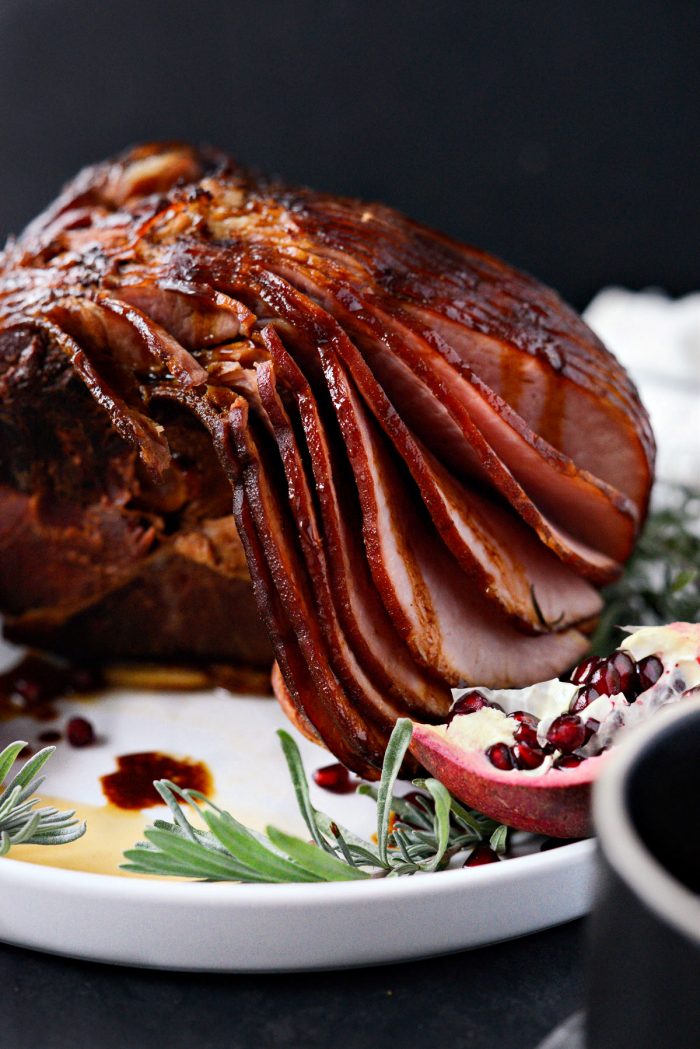 I can’t think of a better compliment. 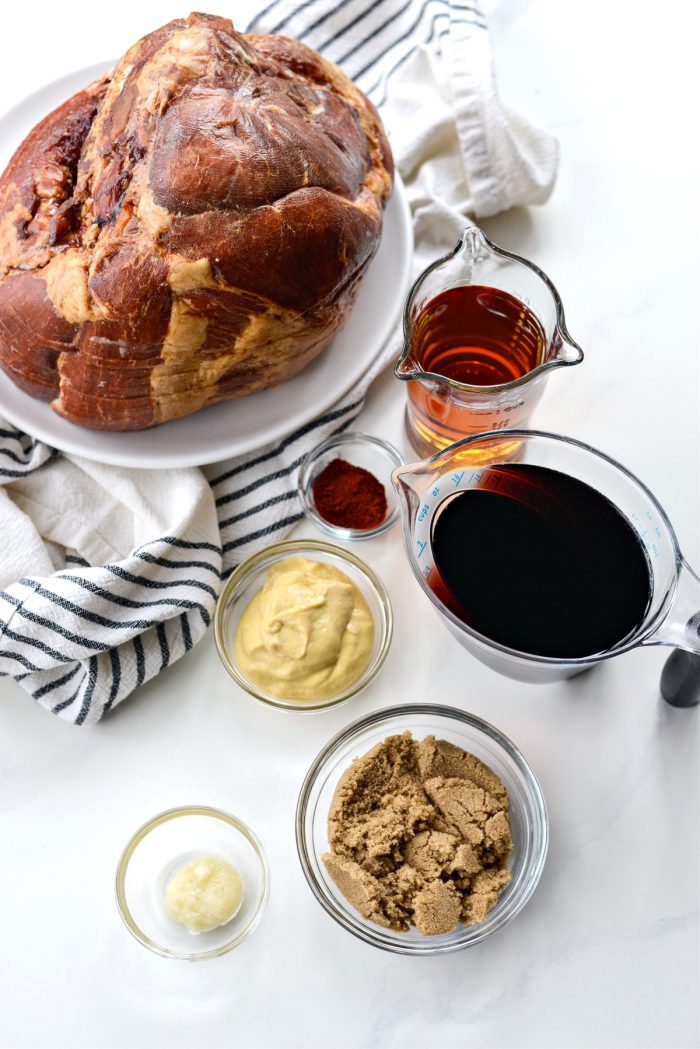 To Make This Pomegranate Bourbon Glazed Ham You Will Need: 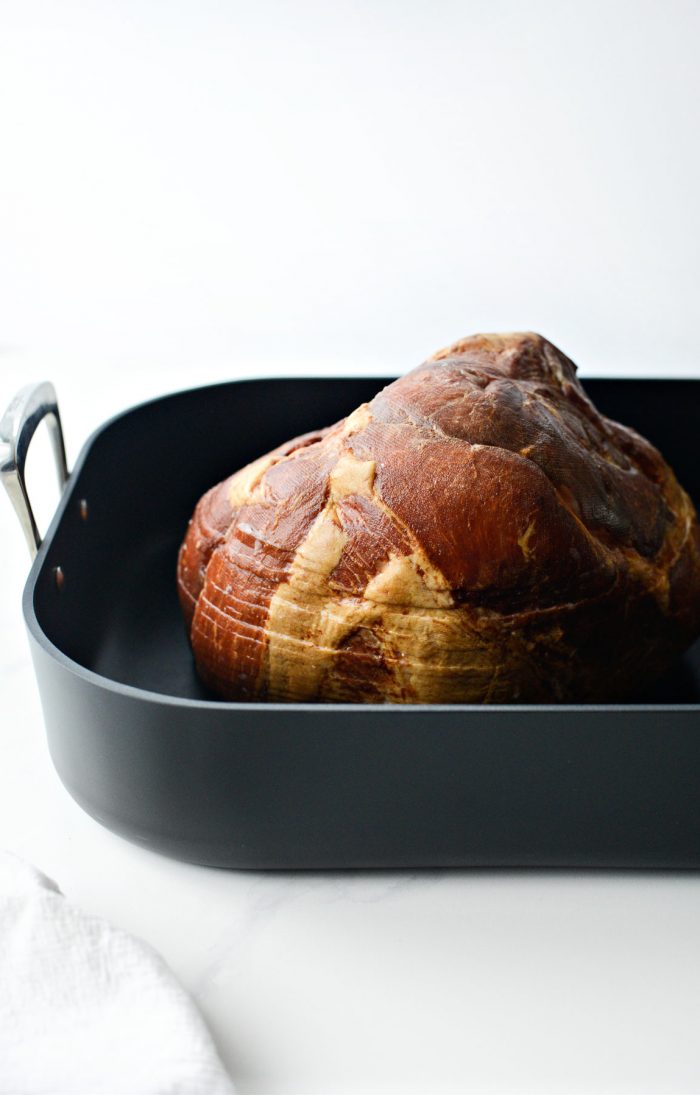 Preheat your oven to 325° and place a 10 pound (give or take) ham, cut side down, into a roasting pan 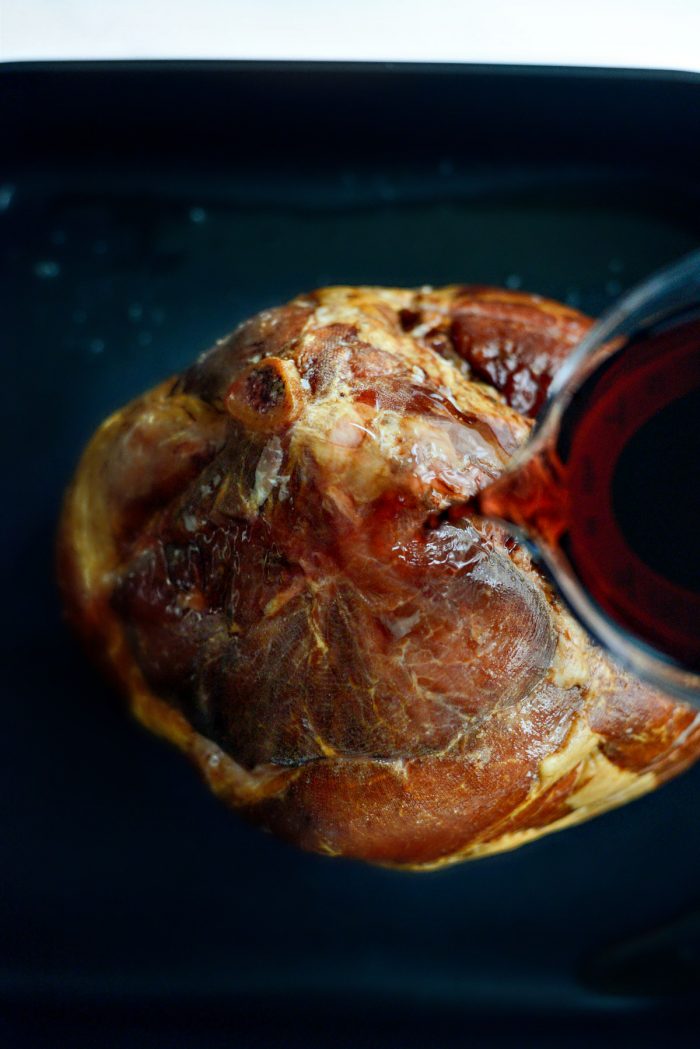 Pour 3/4 cup pomegranate juice with 1/4 cup of the bourbon over top. 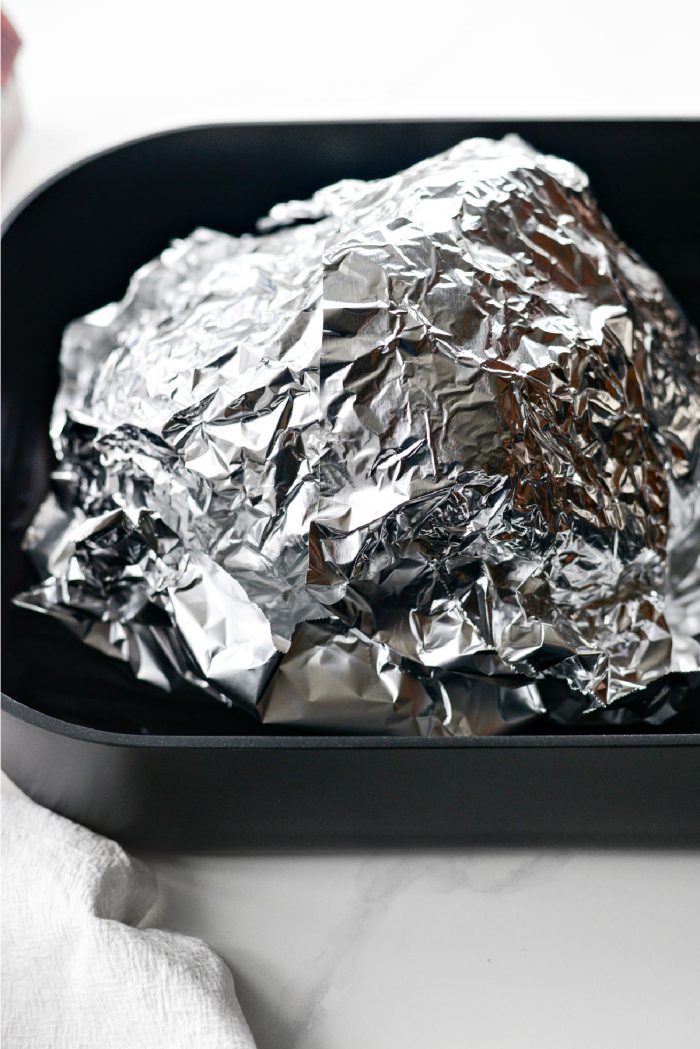 Cover the ham with foil and bake in the lower third of your oven for 90 minutes. 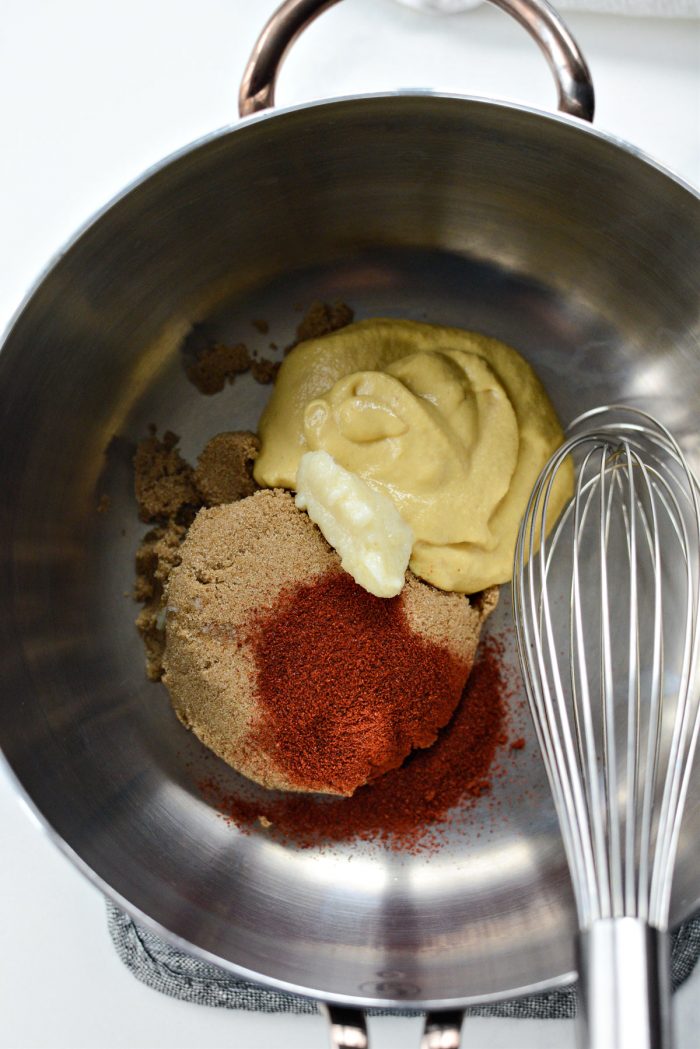 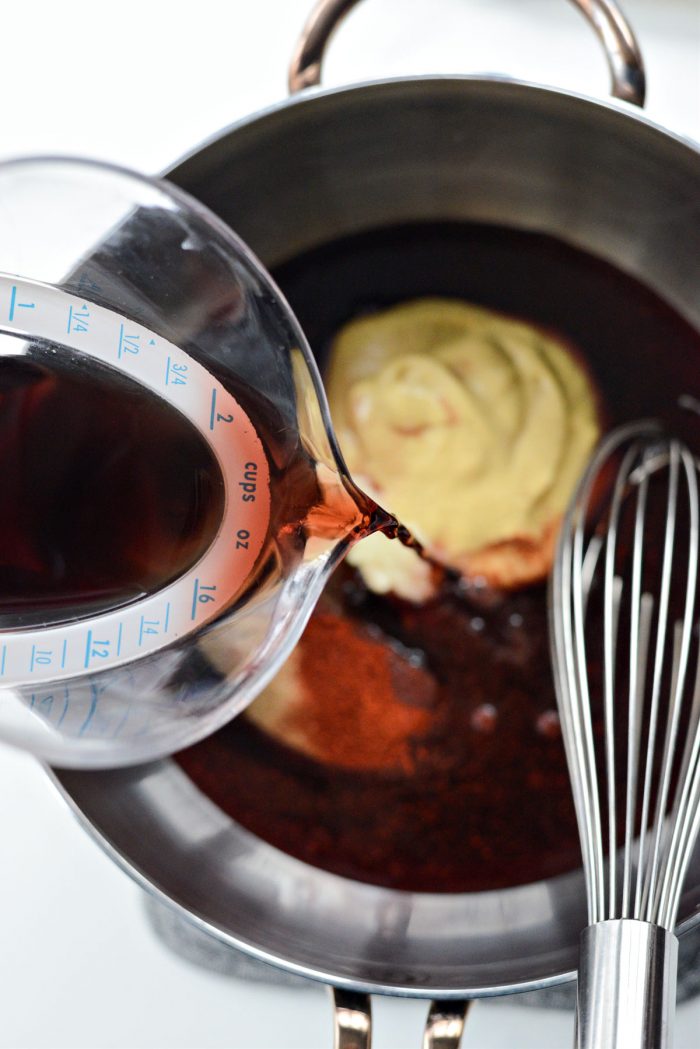 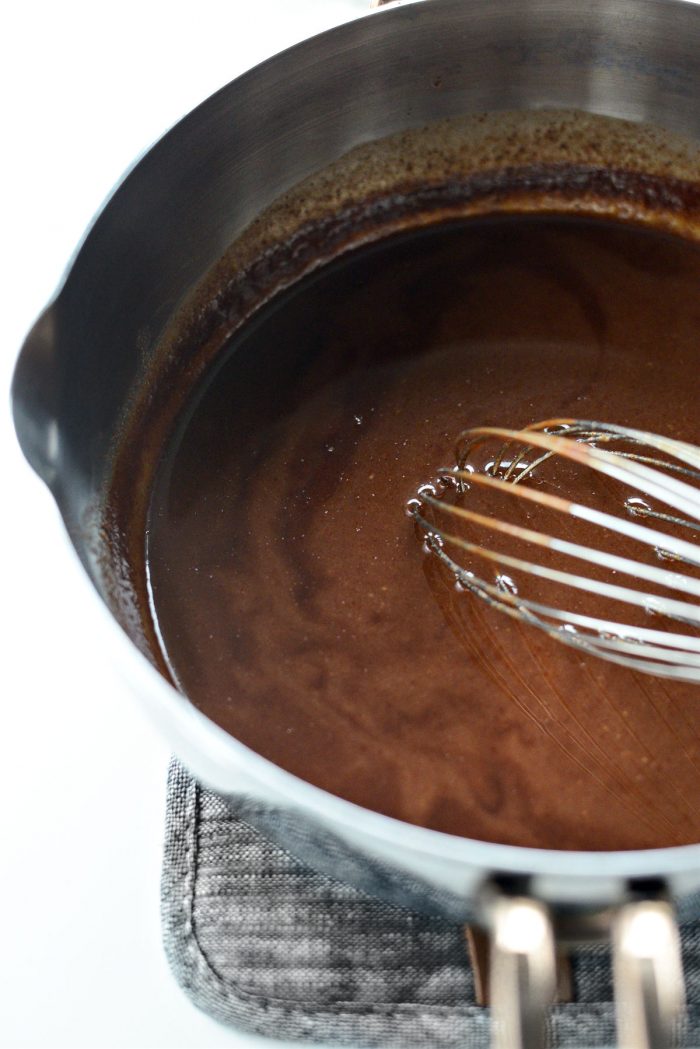 Simmer over medium to medium-low heat until the glaze has reduced by half. 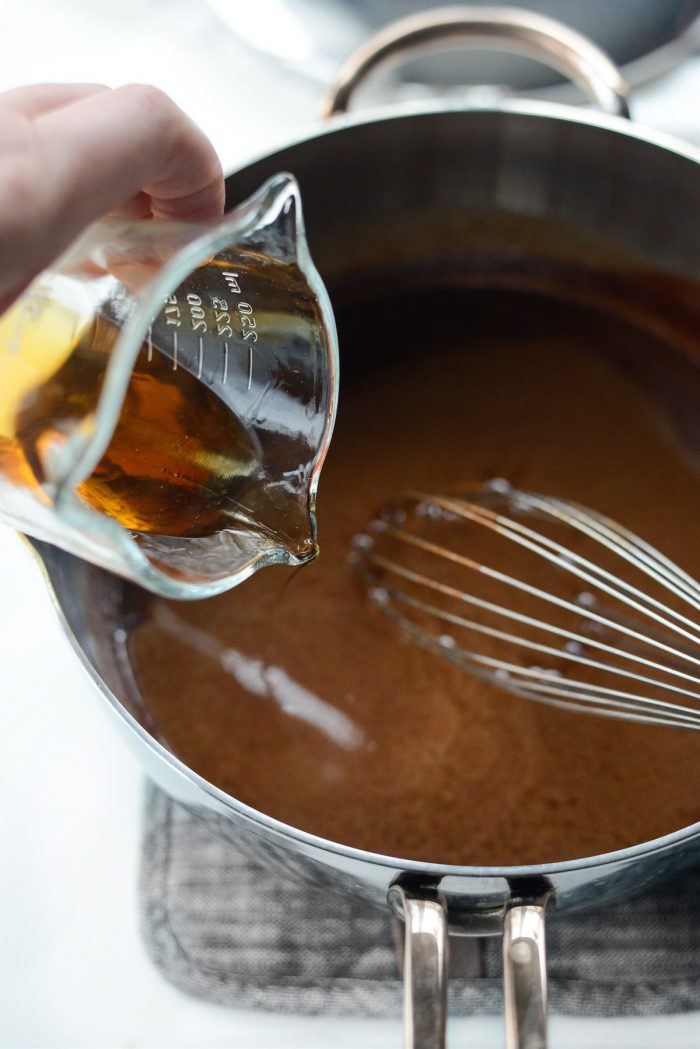 Remove the pan off of the heat and stir in the remaining 3/4 cup bourbon. 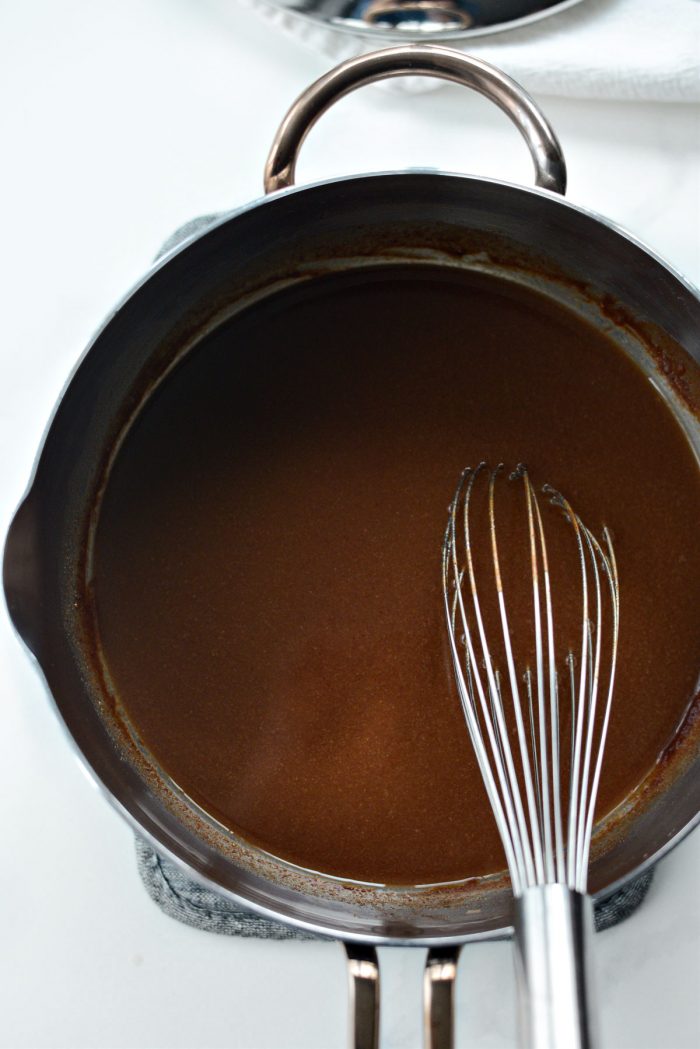 Set this off to the side while your wait for the ham. 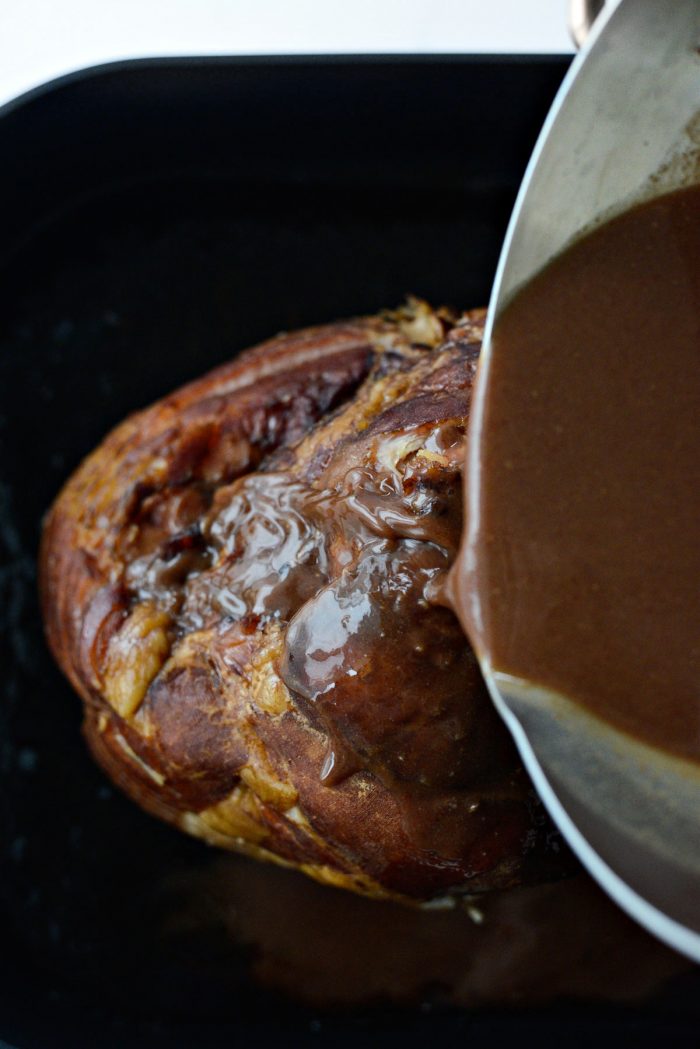 When the ham has baked for 90 minutes, remove and discard the foil. Pour the glaze over top of the ham. 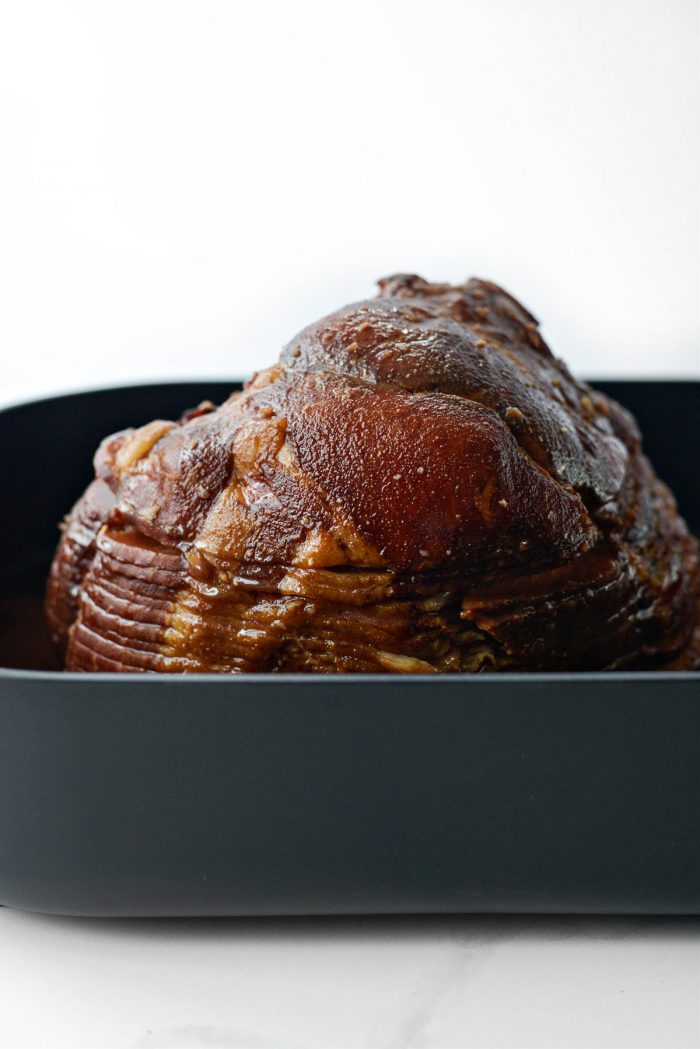 Slide the ham back into the oven (uncovered) and bake for 15 minutes. 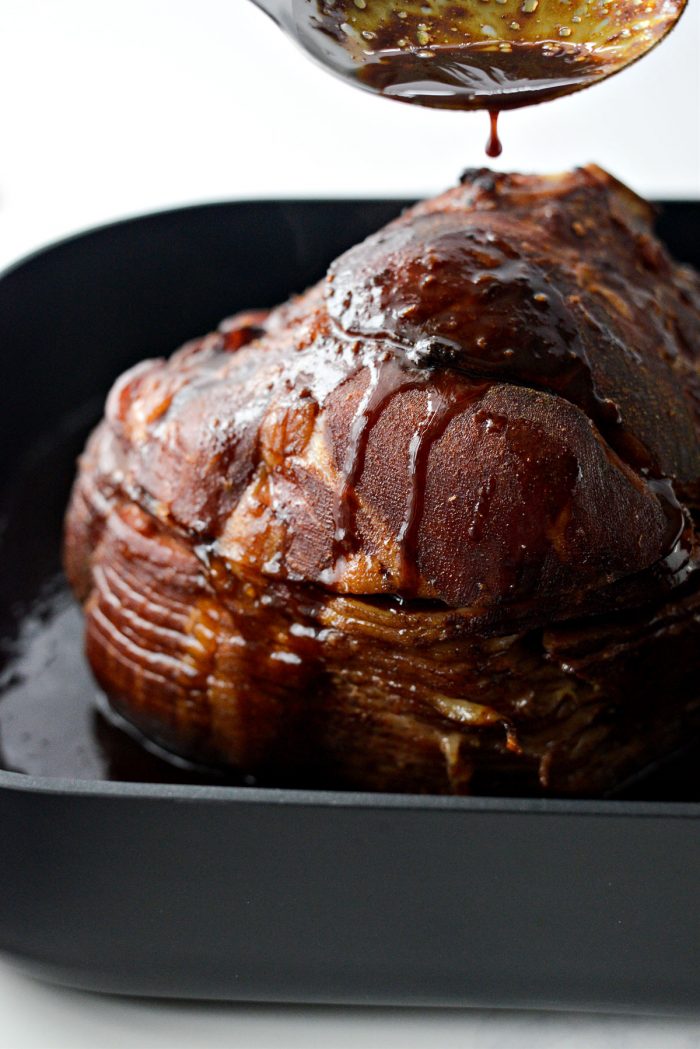 Then remove and spoon the glaze in the roasting pan, over top of the ham. Bake for an additional 15 minutes. 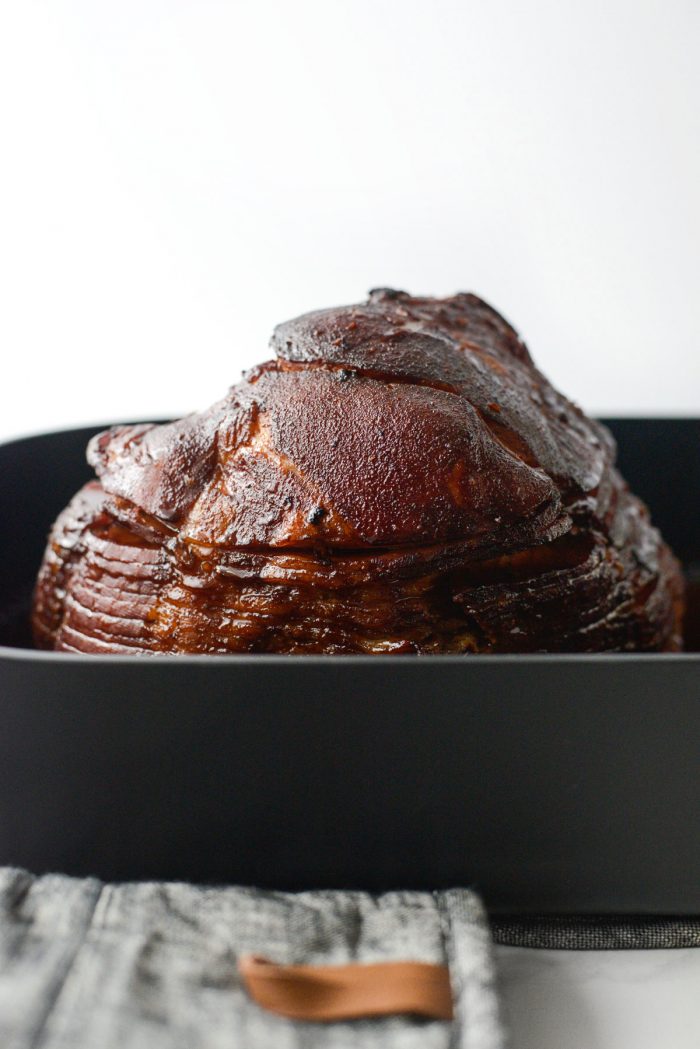 Repeat if necessary until the ham is heated through and the outside of it is sticky, 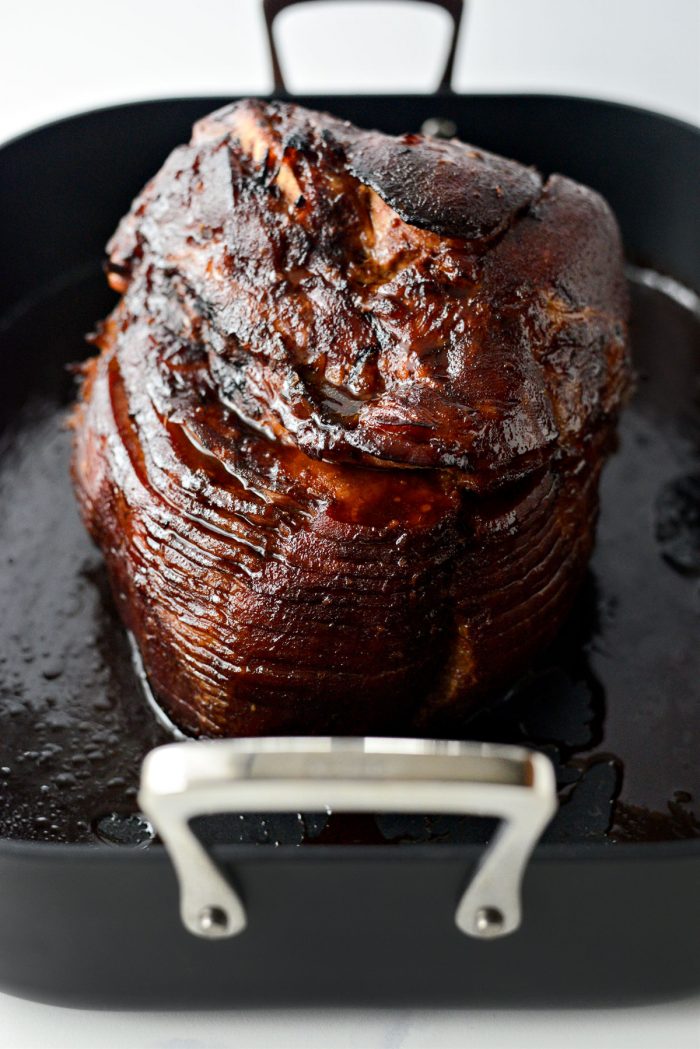 Spoon the glaze over the ham one final time before serving.

Carefully transfer the ham to a carving board. Use a thin knife and cut around the bone before transferring the ham to a serving platter. Pour the rest of the glaze from the roasting pan into a dish and serve with the ham.

What Sides Go With Ham? 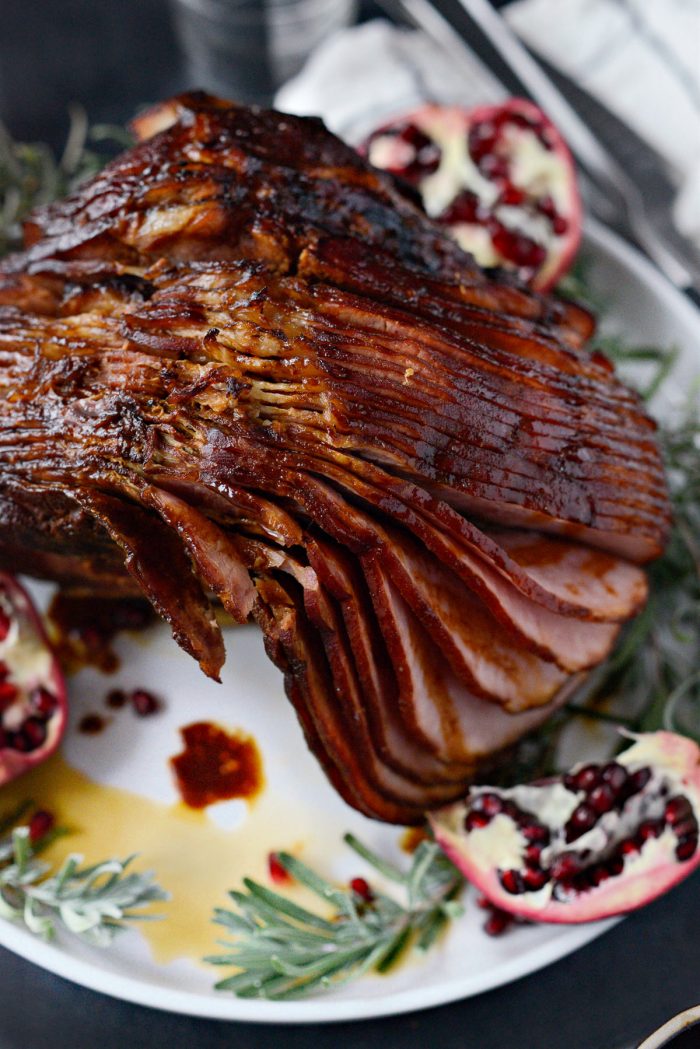 Enjoy! And if you give this Pomegranate Bourbon Glazed Ham recipe a try, let me know! Snap a photo and tag me on twitter or instagram! 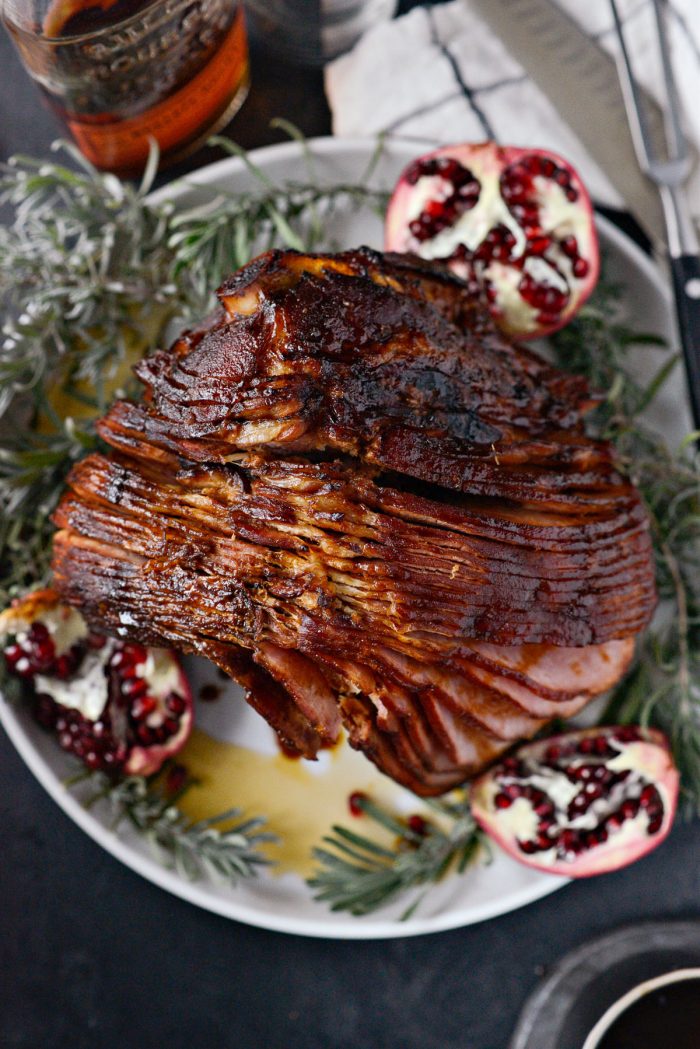 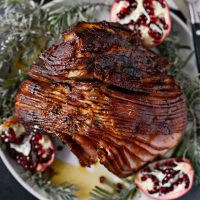 Simple and elegant, this Pomegranate Bourbon Glazed Ham is no doubt a show stopper. Ditch the glaze packet and make your own homemade sweet and boozy glaze this year, you won't be disappointed!
Prep Time: 10 mins
Cook Time: 2 hrs
Total Time: 2 hrs 10 mins