Got peppers? How about making your own homemade pickled banana peppers? I haven’t seen my counter tops in weeks.

So that might be a teensy bit of an exaggeration. But between my neighbor Charlie and his Cadillac-sized zucchinis and our friends Craig and Kelly… my counters have been covered in garden produce. Not that I’m complaining or anything. 🙂 From our friends garden I was given a bunch of these greenish yellowish peppers. So I did a little Google search to find out exactly what kind of peppers these were. I came back just as confused. They may be banana peppers they may be Hungarian wax {maybe a little of each?}. Luckily either can be used in this recipe, the Hungarian Wax being the spicier option which is what we prefer. I took a sampling of one and they were a smidgen spicy but nothing like a jalapeno.

So yeah I guess these homemade pickled banana peppers that are really pickled Hungarian wax? Maybe both? Honestly just use whichever you like or have growing in your garden this summer. And if you’re like me and can’t really tell the difference just throw them both together and have a mixed batch. To Make These Pickled Banana Peppers You Will Need:

Start by washing, drying and slicing 1 pound of banana or {Hungarian wax} peppers. I didn’t have a full pound so I just adjusted the amounts. However I’ve given the full recipe in the printable at the end of this post. Throw a smashed and peeled garlic clove into a jar.

At first I couldn’t find a jar to hold this batch so that’s why you see two smaller jars. I split large garlic clove in half and put one half in each jar. Moments later I found the jar {behind my coffee mugs} so I added them to the larger jar. Clearly I need to reorganize my cupboards. Add the sliced peppers to the jar with the garlic. In a medium pot add in 3 cups of vinegar plus two cups of water. Measure and add in two tablespoons of kosher salt and one tablespoon sugar. Bring it to a boil, stirring until the sugar and salt have dissolved then remove off of the heat. For crisp pepper rings allow the pickling liquids to cool before pouring over top. Once cooled, pour the liquids over top of the pepper slices. Wouldn’t you know it was at this point that I found the larger jar so I just combined the two smaller jars into the larger one. At this point they still are little on the green side, but as they sit in the fridge they will turn that classic yellow color and get even more amazing. Just like my pickled jalapeno recipe (those are them, pictured in the background) I would treat this jar as you would refrigerator pickles. They should last a couple of months in the fridge and will lose their pungency and heat as the jarred peppers become past their prime. I LOVE these homemade pickled banana peppers! Sweet and spicy and perfect on top of pizza, salads, hot dogs… straight out of the jar with a fork. Really, the list goes on. Now go on and get your pickled-pepper-on.

Enjoy! And if you give this Pickled Banana Pepper recipe a try, let me know! Snap a photo and tag me on twitter or instagram! 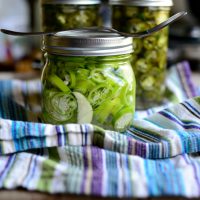 I'm in no way a canning expert, please be sure to follow the USDA guidelines. FOR CANNING: To can these start by following standard canning procedures. Like boiling jars and lids for at least 5 to 8 minutes. Then add in the garlic clove and pack the peppers into a jar and pour in the brine leaving a 1/2 inch to 1 inch space from the top. Run a knife or fork around the inside parameter of the jar to remove any air bubbles. Screw on the caps, place into a pot with water that covers the jar(s) completely and bring to a boil for 10-15 minutes. Carefully remove and allow the jars to cool. The lids should give that tell tale "pop" sound.
Author: Laurie McNamara
Course: condiments
This post may contain affiliate links.