In these simple mocha java milkshakes, coffee ice cream is mixed with cocoa, coffee, milk and a pinch of cinnamon for a tasty milkshake. It’s been hot. Too hot. Just sitting at my daughter’s softball games works up a nasty upper-lip sweat especially when it’s a hundred degrees.

On hot days like these, I crave for an icy-cold shake.

Which had me thinking… Coffee + Shake.

Originally I wanted to name these JaMocha shakes, but as one of my best friends Amanda (Hiiieeeee Amanda!!) pointed out every so ah, legally (?) that I may be breaching some sort of trademark law so I might not want to name this after an Arby’s shake.

So I said, fine Mo-java it is. And then she laughed at me. I couldn’t tell if she thought I was super funny or not. With that said, I decided to keep it simple and I’m going with Mocha-Java… it just feels right. To Make These Mocha Java Shakes You Will Need: You need about 2 cups. I just add giant spoonfuls until it looks about right. It doesn’t have to be perfect. Next add in a half tablespoon of Dutch process cocoa. It’s way smoother tasting then reg-o cocoa powder and is mostly used in beverages ie. hot cocoa. Next add in the whole milk. Add in the cooled coffee. Side Note: This picture makes me wish for coffee drinking fountains. Amen. Put a lid on it and turn it on. Slip it into a glass. I made mine a grande, and I don’t regret it. I have two kinds of girls. One who steals the remaining last drops of my coffee and one who WILL NOT even come close to trying it. Well both of them were over with in nano-seconds when they heard I was making shakes, ready and willing to offer-up their services to be taste testers. Before I knew it their mocha java milkshakes were gone. It was a double win and they both gave me thumbs up! 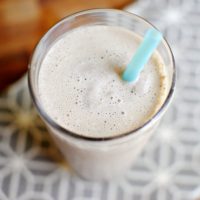 In these simple mocha java milkshakes, coffee ice cream is mixed with cocoa, coffee, milk and a pinch of cinnamon for a tasty milkshake.
Prep Time: 5 mins
Total Time: 5 mins