Well this year I’m all about the dark chocolate toasted coconut combo. It satisfies that salty-sweet tooth I have and I really don’t feel too guilty about polishing the whole bowl. Dark chocolate has antioxidants right?

My husband and I make a big bowl of popcorn at least once a week and we either drizzle it with butter and sprinkle with salt or a few (twenty, give or take) dashes of Frank’s Red Hot. But every once and again I crave a little chocolate on my popcorn and after I finished my Costco size bag of dark chocolate sea salt popcorn, I needed more. I wasn’t about to drive 25 minutes to the nearest Costco, so I made it myself. Last year I got my beloved air popper for Christmas and have since used it 7,568 times. Seriously though friends, air-popping is where it’s at. It literally takes five minutes to pop an enormous bowl, there are hardly any un-popped kernels left and air-popped popcorn is way better for you.

Unless you decide to trash it up {and by trash I mean it in a good way} with toasted coconut, dark chocolate and sea salt. Measure a half cup of popcorn kernels into the chamber of your air popper. And let the popping begin. This sound (can you hear it?) reminds me of my childhood and I still stand directly over it and stare down and watch the kernels pop and work their way up and down the chute. After the corn has popped, I arrange the popcorn in an even layer on two rimmed sheet pans (I lined the pans with parchment for easy clean up) and then I picked through it, finding and discard all the un-popped popcorn. Sprinkle with the half cup of toasted coconut. I had some left over from this nog recipe, but here’s a link on how to do it. For the chocolate drizzle; I added 4 ounces of dark chocolate plus two tablespoons of unrefined organic coconut oil and nuked it at 10 second intervals, stirring in between until it was as smooth as silk. Then I poured it ever so neatly, without spilling a *ahem* drop into this nifty squeeze bottles. But a spoon or fork could totally get the job done, I always complicate things. Final step: sprinkle with flaked sea salt and pop it in the fridge to set. Now just grab yourself a bowl and start popping this popcorn like it’s nobodies bidness. Tis the season for fun treats.

Now go on and get your snack on. I’ll be curled up on the couch with this bowl of Dark Chocolate, Sea Salt and Toasted Coconut Popcorn, a bottle of Malbec, watching Love Actually and The Holiday. Enjoy! And if you give this Dark Chocolate Sea Salt and Toasted Coconut Popcorn recipe a try, let me know! Snap a photo and tag me on twitter or instagram! 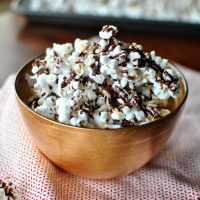