In this Slow Cooker Pork Carnitas recipe, pork shoulder gets rubbed down with an herb and oil mixture, then is cooked low and slow with onions, garlic, jalapeno and fresh orange until falling apart. I take it a step further and fry up the shredded pork in a skillet. So delicious. [this post contains affiliate links.] It was round two.

Me vs. Pork Carnitas.

Thus far I’ve failed in the carnita making department. BUT I never give up, because one day… I just stumbled across a Slow Cooker Pork Carnitas recipe that made complete sense. It was destiny and as a bonus these pork carnitas are made in a slow cooker.

These are far from traditional carnitas… but in this day in age, unless you’re in a kitchen in Mexico, standing over a copper pot with someone who’s been turning out carnitas since they could hold a spoon… then how could carnitas be called authentic? But what I can call it is amazing.  This recipe makes a boat load and you’ll be eating carnitas for DAYS and I made it in my slow cooker! Rinse and pat-dry a 4 pound pork shoulder roast. This is a shoulder blade… or something. But as long as it’s from the shoulder region of a pig, you’re golden. Season it heavily with kosher salt and fresh cracked black pepper then scoot it off to the side for un momento por favor. Whoop… would you look at me… pulling out those high school years of Spanish classes!! Then in a small bowl add three tablespoons of olive oil. …And one teaspoon cumin and 1/2 teaspoon ground coriander. Give it a good ol’ stir… And then pour it all over that shoulder. Rub your hands all over that piece of pork, massaging it into the meat. Hands… natures best tools, I couldn’t blog without ’em! Next roughly chop up an onion, jalapeno and 5 cloves of garlic. Place the pork into the slow cooker and add in those chopped goodies. Slice and orange in half and squeeze both halves all over the pork. Update:  I also squeeze the juice of half a lime. Throw those empty orange halves in as well. Heat a large 12 inch skillet on medium-high heat with 4 tablespoons of lard in it. Meanwhile, remove the pork and shred it with two forks. Remove any extra fatty pieces as you come along them. Unless you like that sort of thing.

Update: I also roughly chop up the onions, garlic and jalapeno and mix it into the shredded pork. If making it in advance, I add the shredded pork, onion/jalapeno mixture and 1 cup of the cooking liquids (with the fat skimmed off) back into the slow cooker and keep warm on low. Once the lard is all hot and ready to go, work in batches by dropping the pork in a single layer and letting a deep golden crust form. Scrape up the pork {don’t worry if it shreds even more} and continue to brown more of the pork. Remove to a paper towel line plate and cover with foil to keep warm before moving on to the next batch. Feel free to add a little bit of the cooking liquids {strained to catch the onions/jalapenos and any fatty pieces} to the pork after frying for more flavor-flave.

NOTE: (11/23/15) I LOVE this recipe, but I’ve since changed it a smidgen. In addition to the ingredients I also add in ground coriander and lime juice. The recipe below reflects these changes. It’s nearly impossible to NOT snack as you go. My girls where all up in my face trying to steal more pieces. I did season the pork with a tad bit of salt afterwards… but you taste and see how you like it!

I can’t wait to show you what I made with these Slow Cooker Pork Carnitas.

Enjoy! And if you give this Slow Cooker Pork Carnitas recipe a try, let me know! Snap a photo and tag me on twitter or instagram! 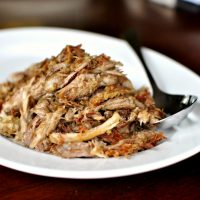 Pork is slowly cooked all day in a slow cooker before crispy in a little bit of lard. Use carnitas for tacos, burritos or stuff it in your face as is. So unbelievable good!
Prep Time: 25 mins
Cook Time: 10 hrs
Total Time: 10 hrs 25 mins