Salmon chowder is classic comfort food. In it, tender salmon, potatoes and the usual carrots, celery, onion and garlic are in creamy, old bay seasoned chowder. Sweet corn, fresh dill and crispy bacon round out this soup deliciously. 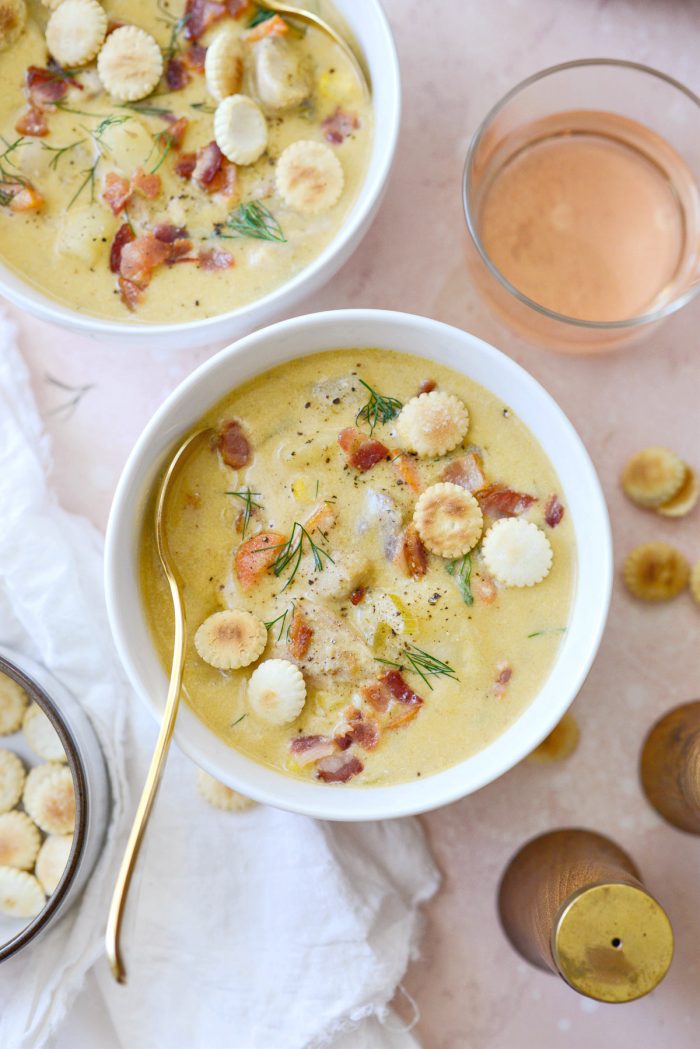 Late September, Pat went salmon fishing. This was his third year going with two long time friends (hi Craig and Mike!). They fish the Manistee river all day and stay at a casino at night. What a trip, right? The first year, Pat didn’t catch a single salmon. The second year, he had a few bites. This year, Pat caught enough to bring me home POUNDS of salmon. I’m really regretting not weighing it all.

Up until three years ago, I don’t think I was aware salmon were in Michigan. Since then I’ve learned, that Chinook salmon (or “king”) are Pacific salmon. They were planted in the Great Lakes years ago and in mid/late August, they will swim up a few Michigan rivers to spawn. And then sadly, die afterwards. 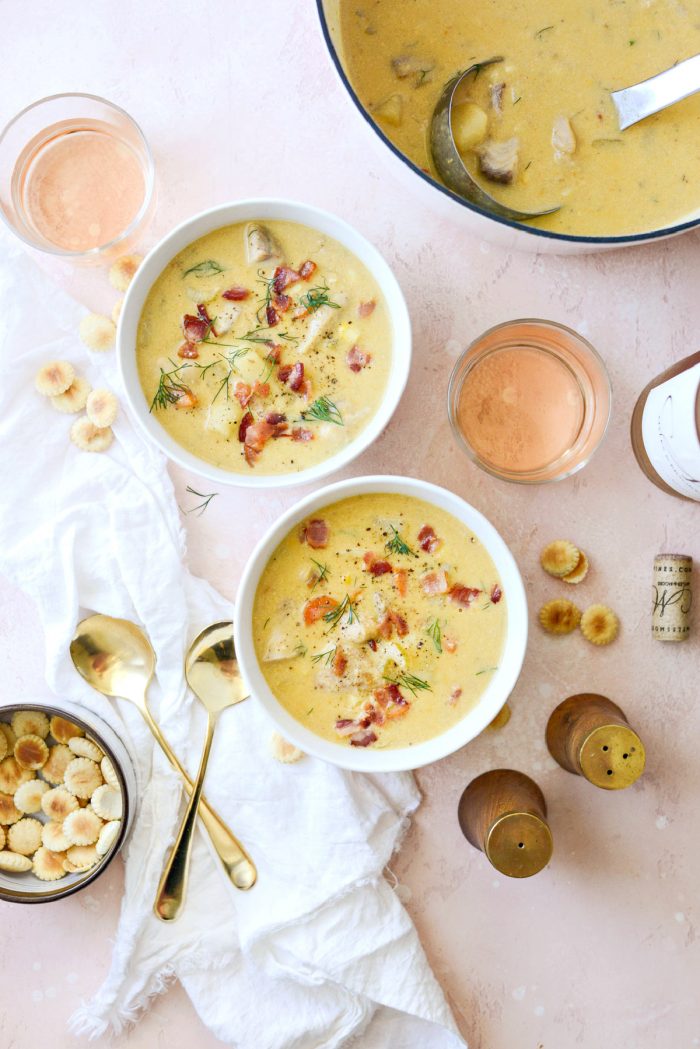 So, now with my newly acquired salmon stash, I knew exactly what I was going to make. First up, chowder.

In this velvety soup, you enjoy  tender lumps of salmon, potatoes, corn and vegetables. And of course, bacon. 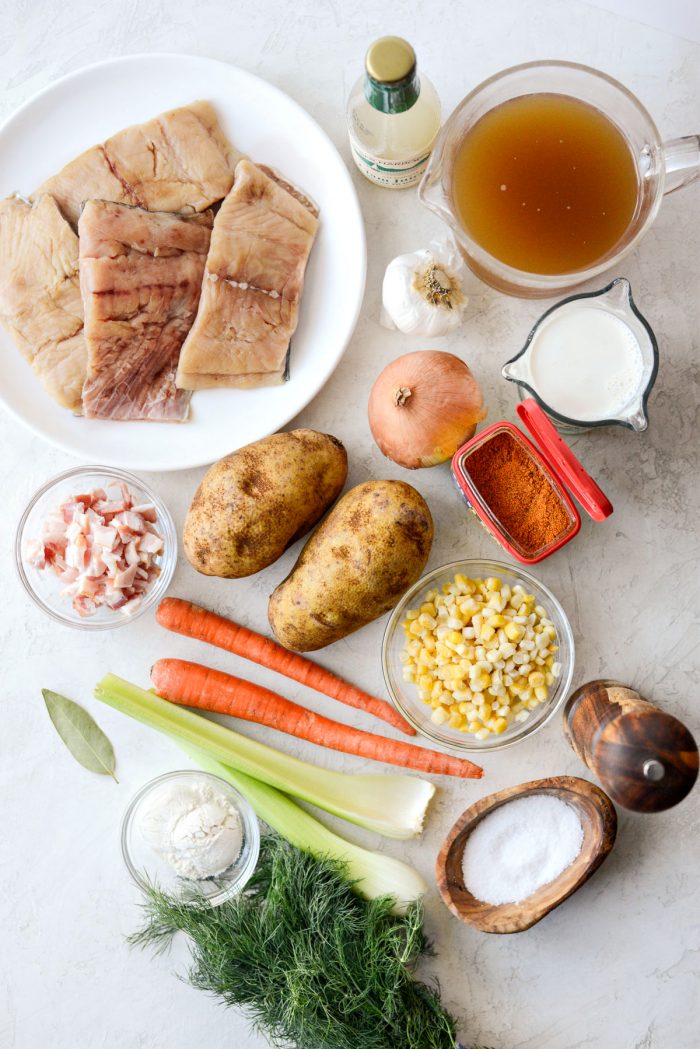 To Make This Salmon Chowder You Will Need: 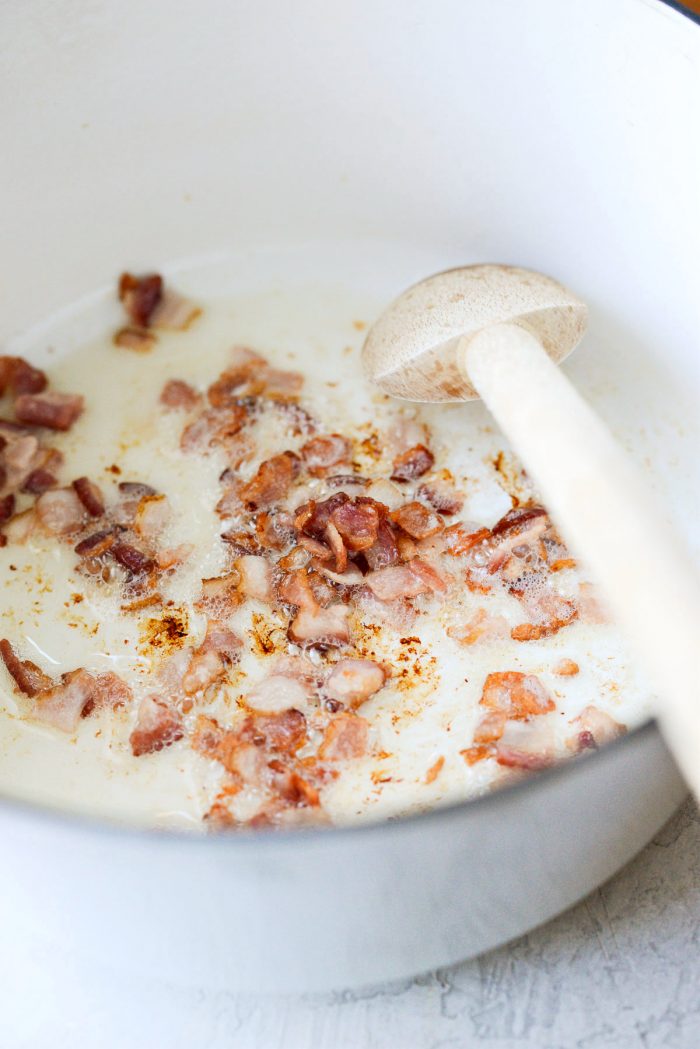 Lightly spray a dutch oven with olive oil. Add 4 strips of center cut bacon (that has been diced) and heat over medium to medium-low, stirring until crispy. Once crisp, use a slotted spoon to transfer the bacon to a paper towel lined plate, leaving the bacon in the pot. 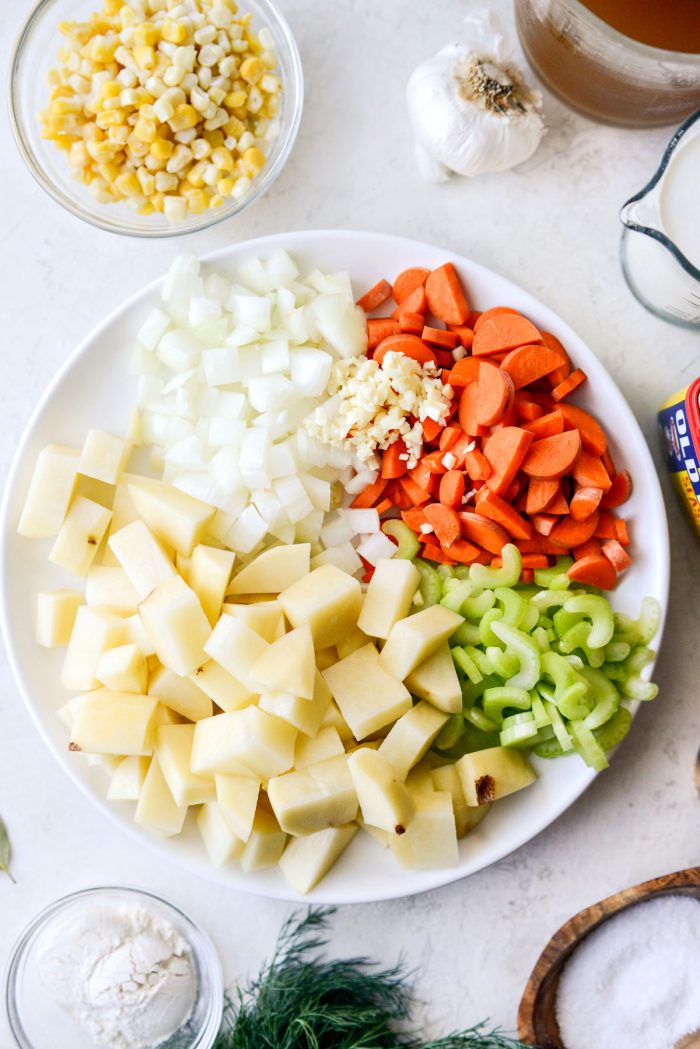 To the bacon fat, add the onion, celery, carrots and garlic with a pinch of kosher salt. 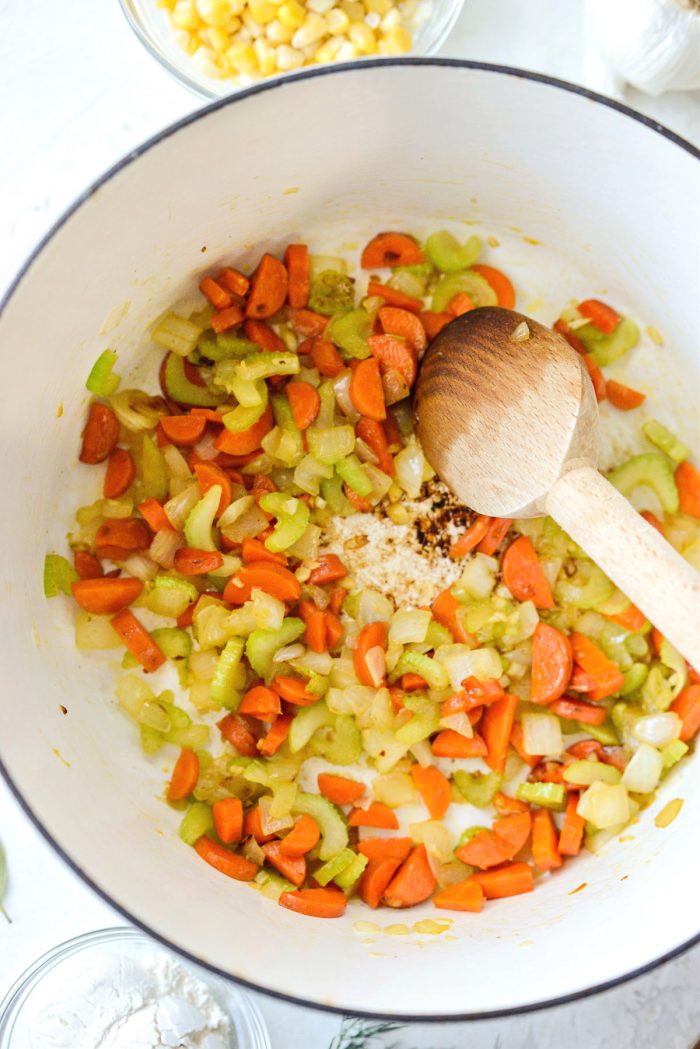 Stir and sautè until tender, about  8 to 10 minutes. 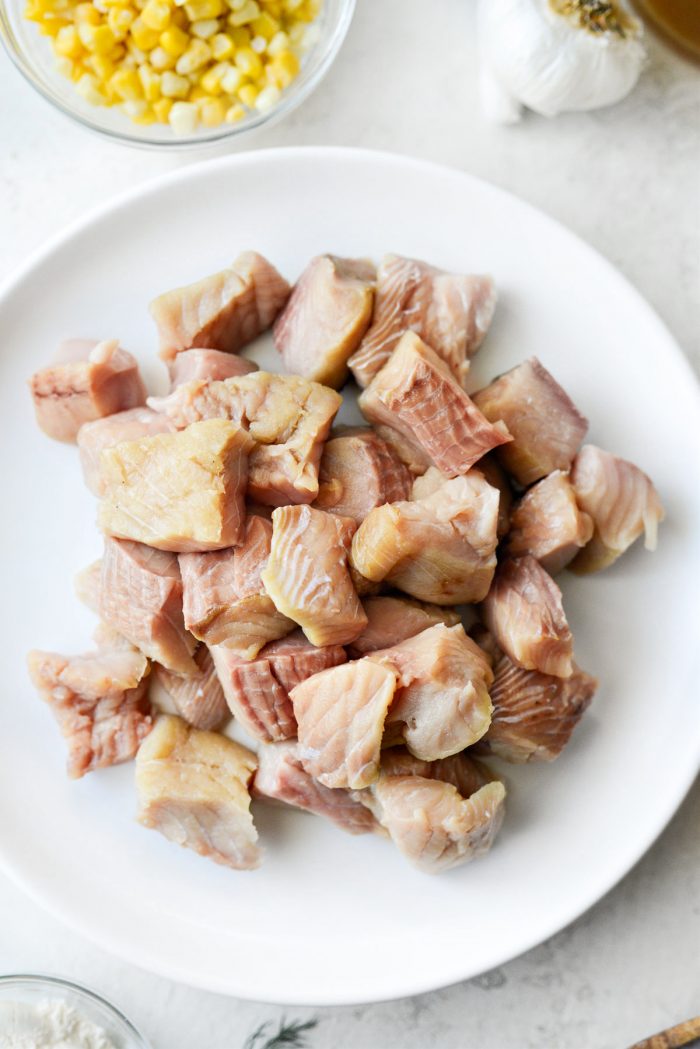 In the meantime, prep the salmon by removing the skin (if any) and cutting it into 1 to 1-1/2 inch chunks.

Why is some salmon white fleshed vs Red?

The type of chinook salmon is considered to be white fleshed, as suppose to red, which we typically think of when we think of king salmon. However, it’s the same type of fish. I’ve read it just depends on how they metabolize the naturally pigmented food that they consume. 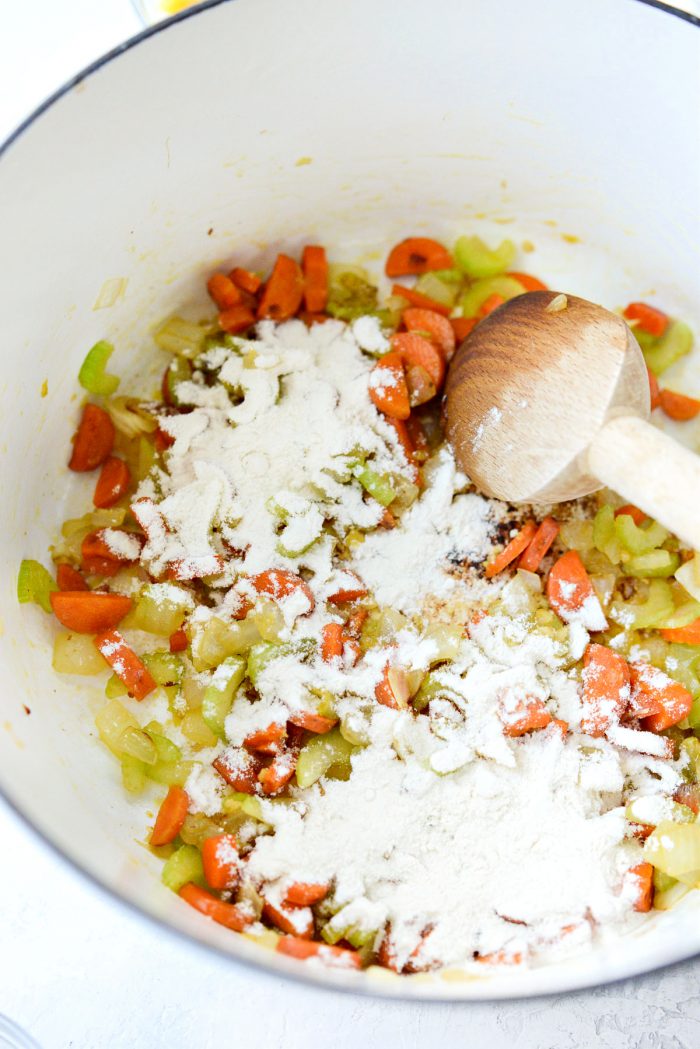 Once the vegetables are tender, sprinkle in 2 tablespoons flour. 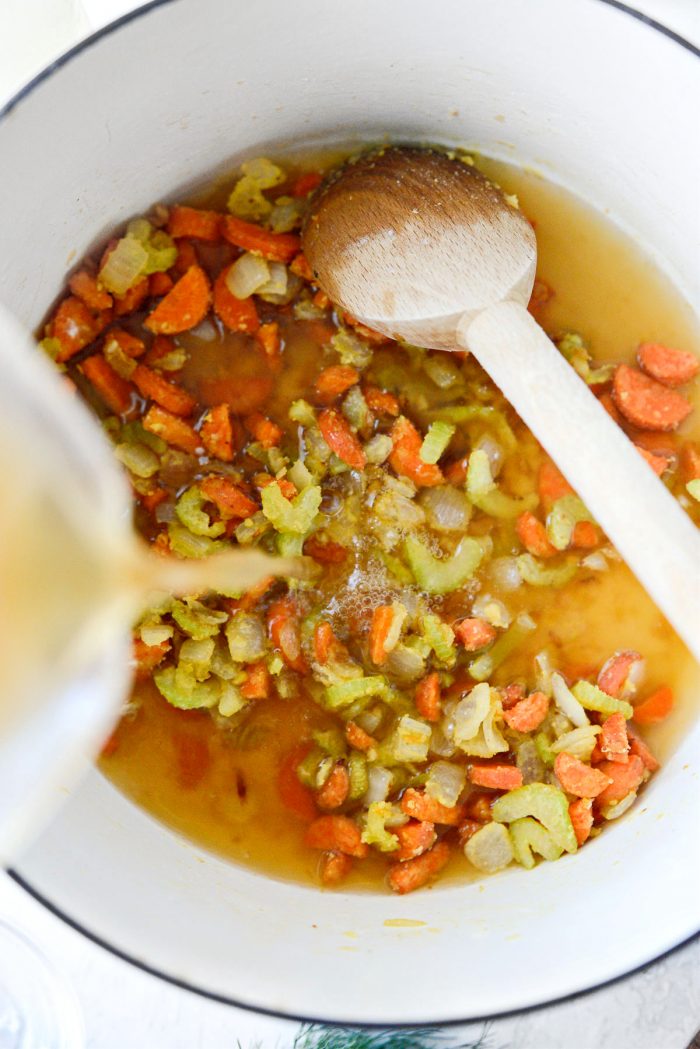 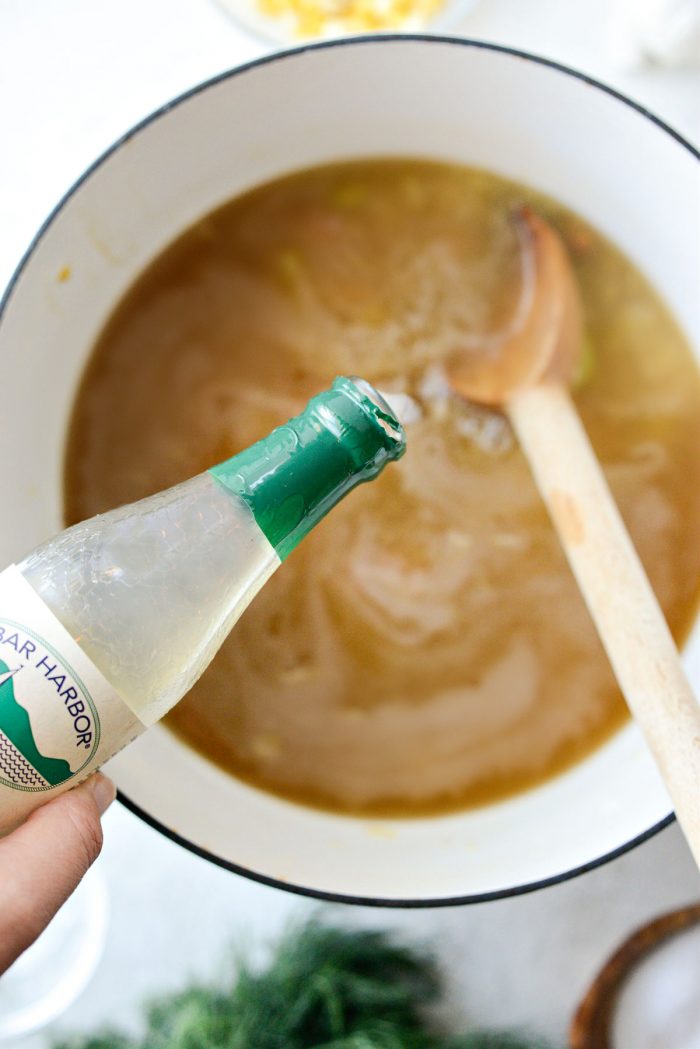 This adds a depth of flavor and I add to any seafood chowder. 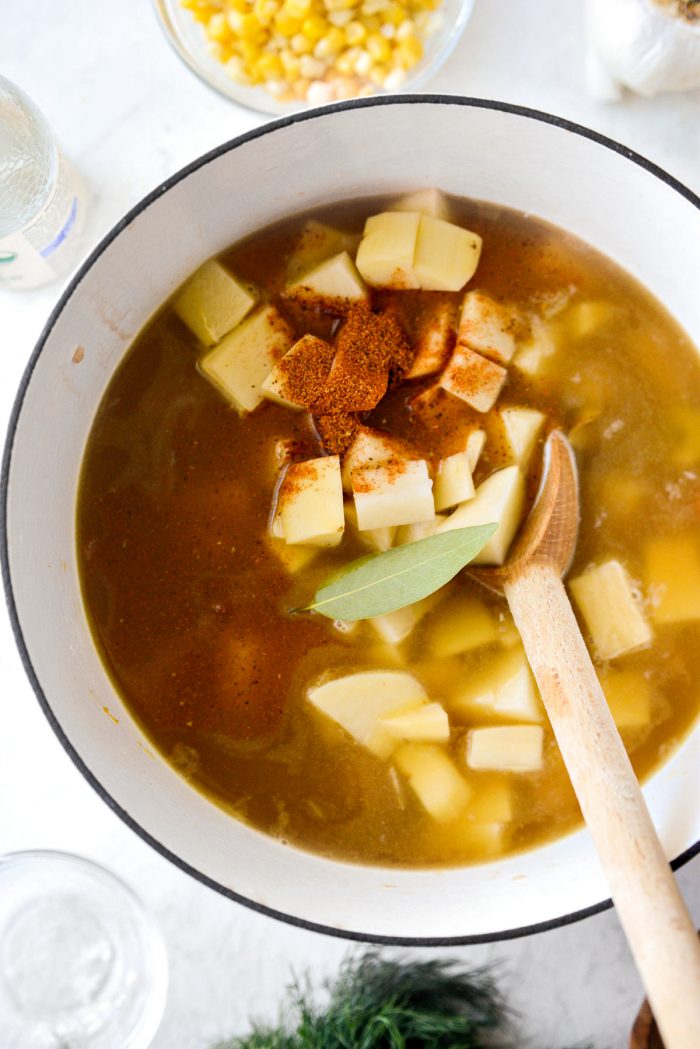 Next, add in the potatoes, 1 bay leaf and 1-1/2 teaspoons old bay seasoning. Stir, cover and bring to a boil. Once boiling, uncover, reduce and simmer for 15 minutes. 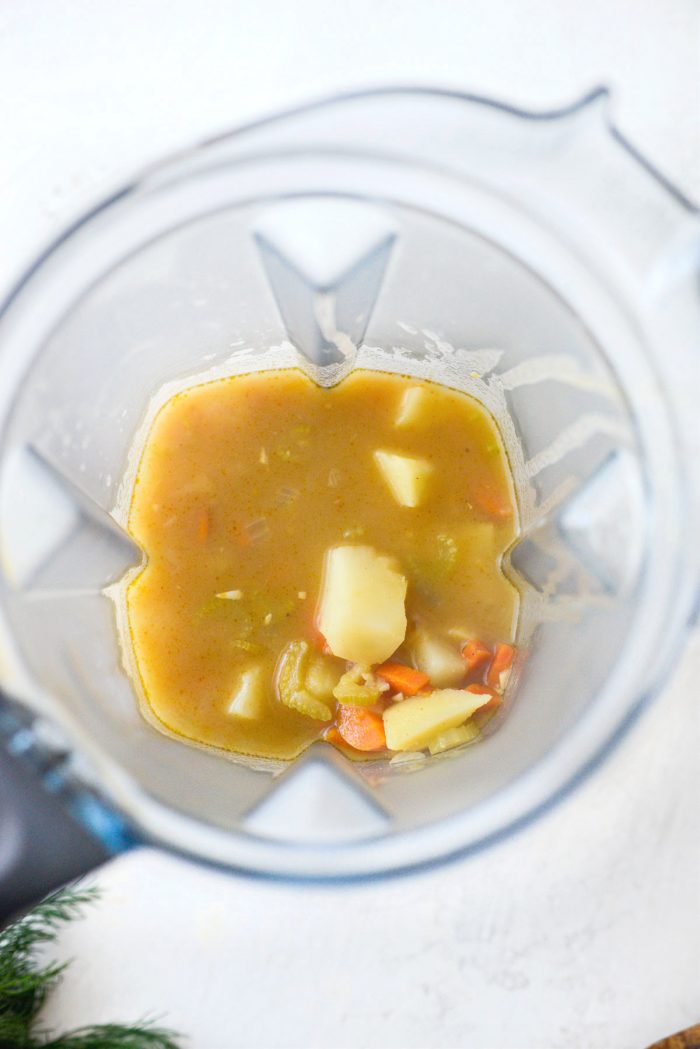 Transfer 2 ladles of the soup into a blender. 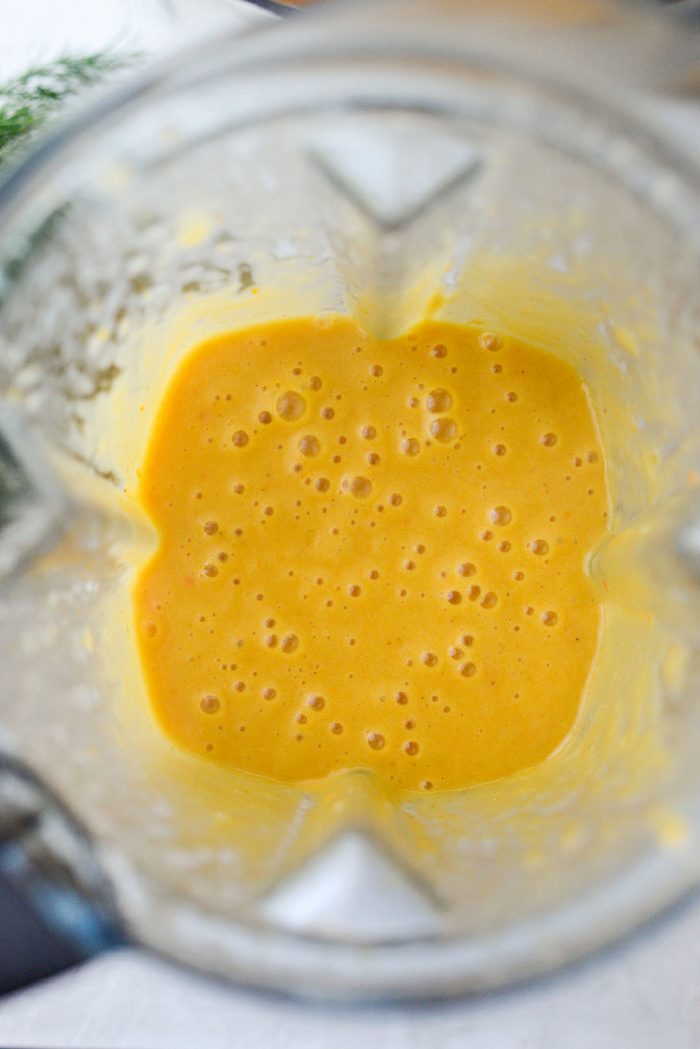 And puree until velvety smooth. 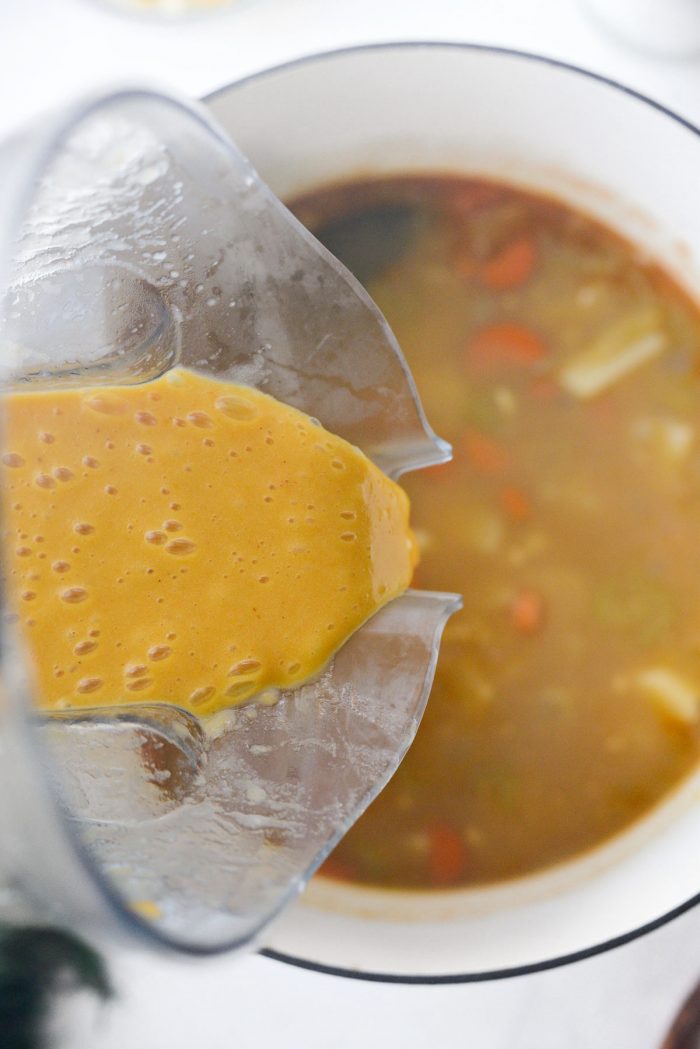 Transfer that back into the soup pot. 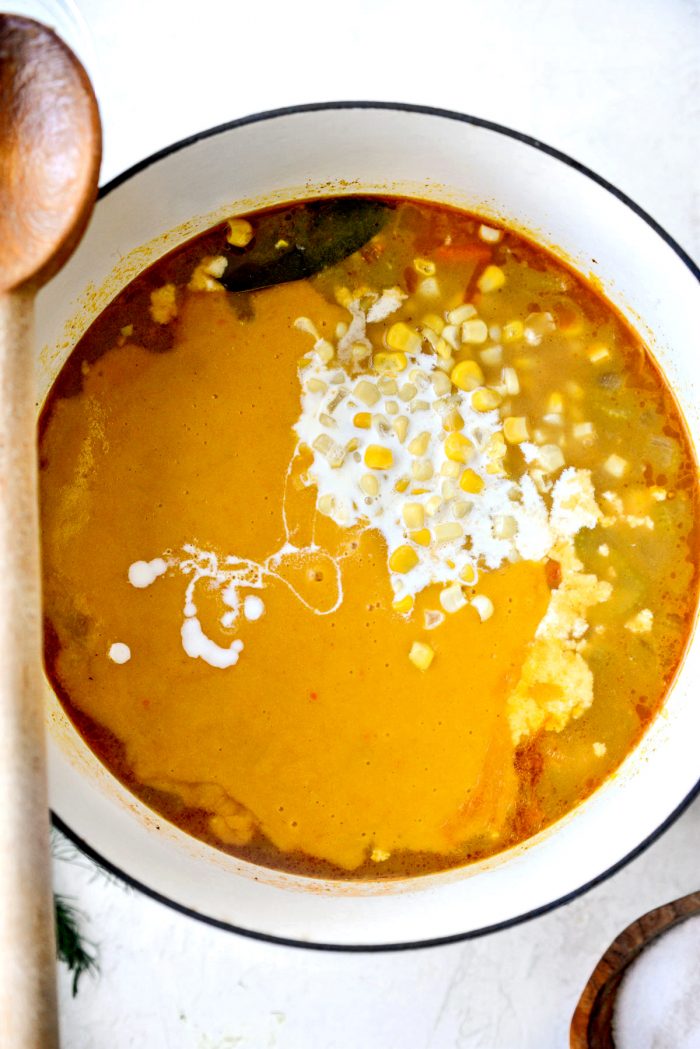 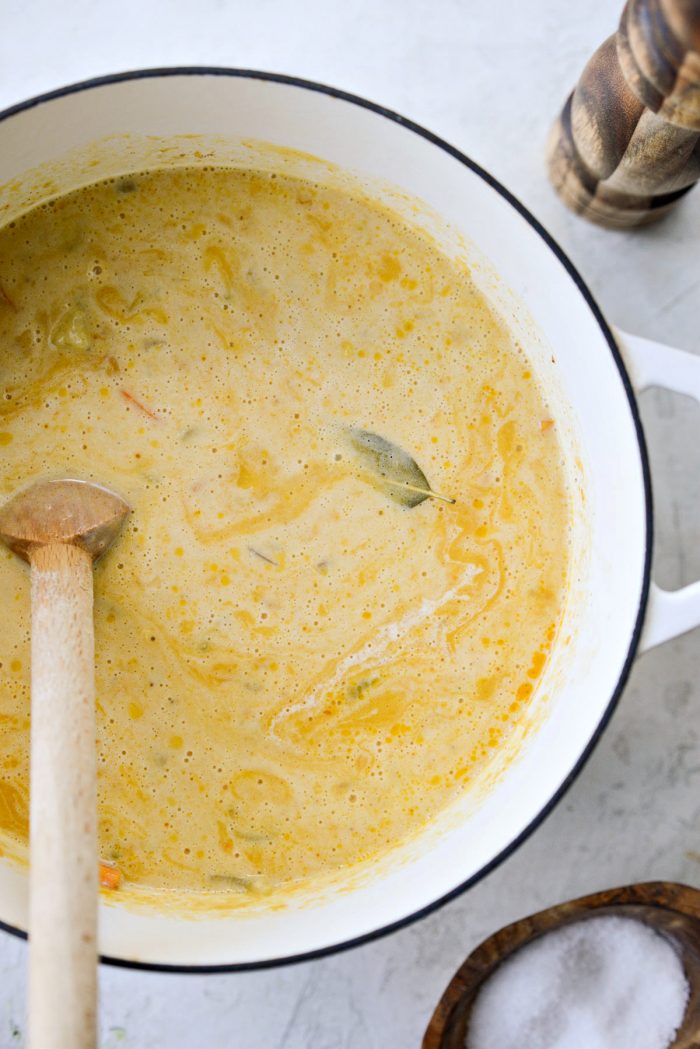 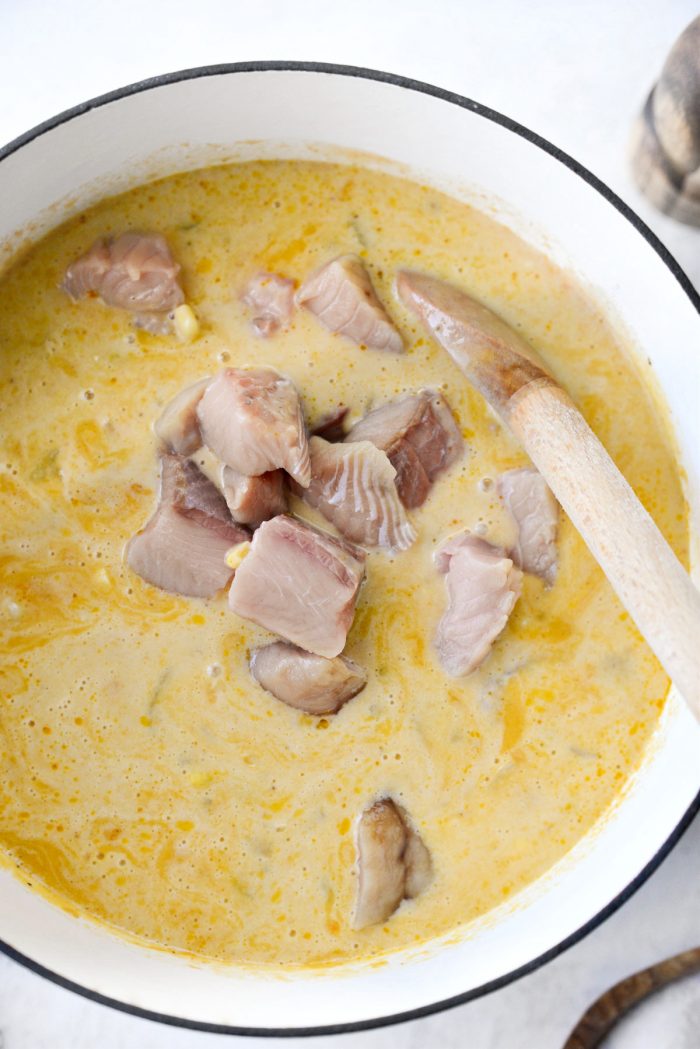 Drop in the salmon, cover the pot and simmer 15 to 20 minutes or until the salmon is fully cooked and flakes easily. 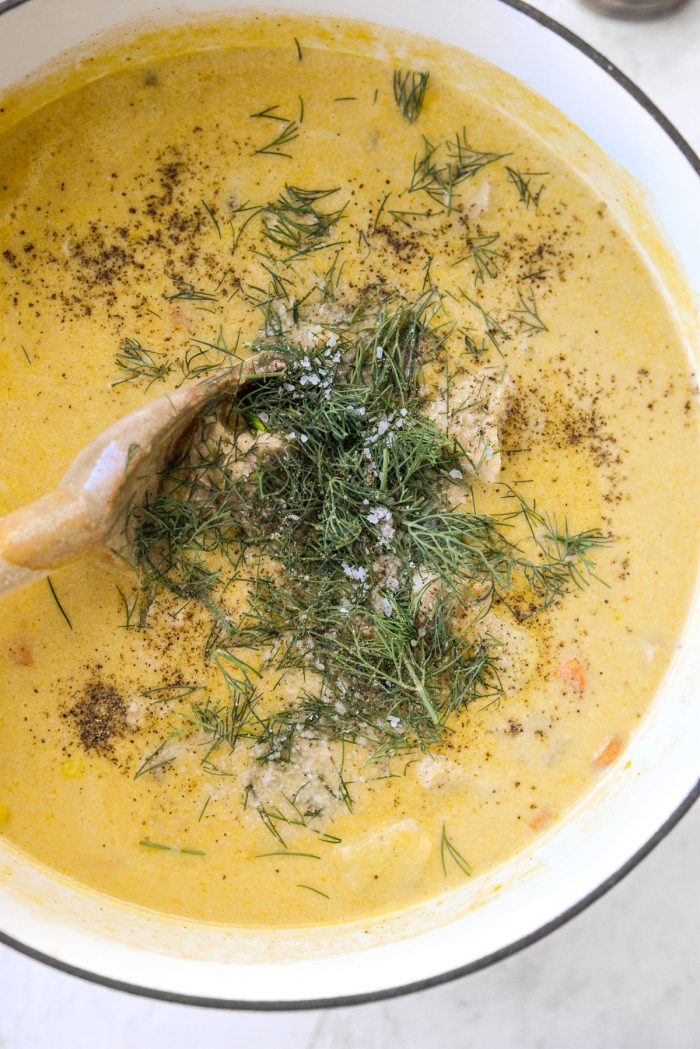 Stir in 1 tablespoon chopped fresh dill and season with kosher salt and freshly ground black pepper to taste. For me it was around 1-1/2 to 2 teaspoons. 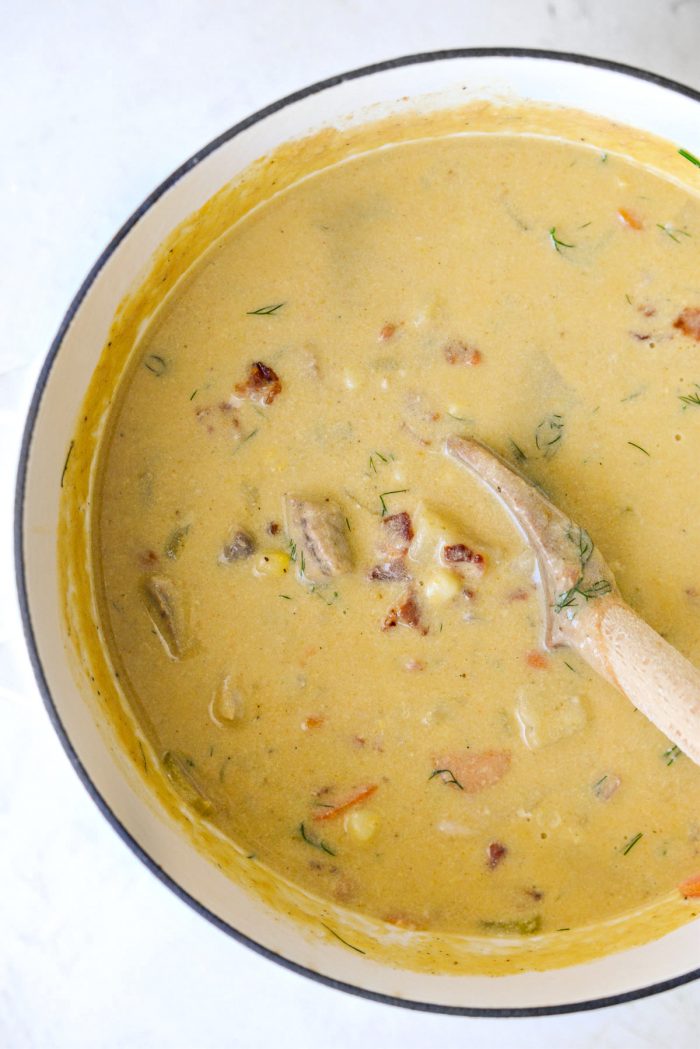 Stir in the crispy bacon and it’s ready to serve! 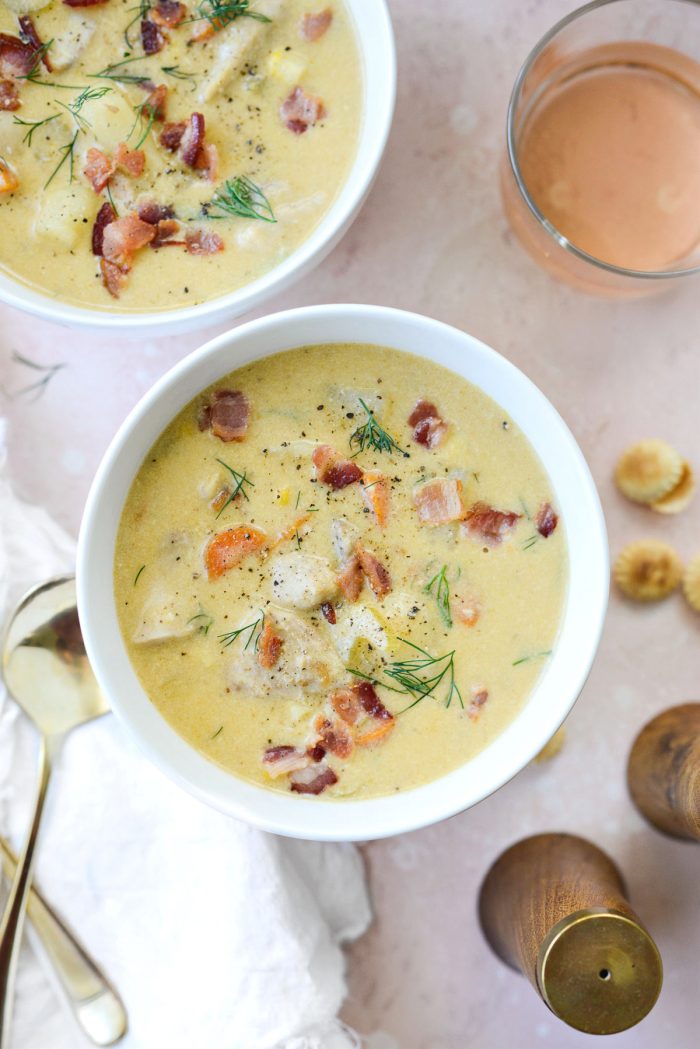 I save a few crispy bacon pieces for topping our bowls, and also garnish with fresh dill and lots of ground black pepper.

Creamy, luscious without being overly seafood-y. It’s the perfect soup to warm up on a cold day. 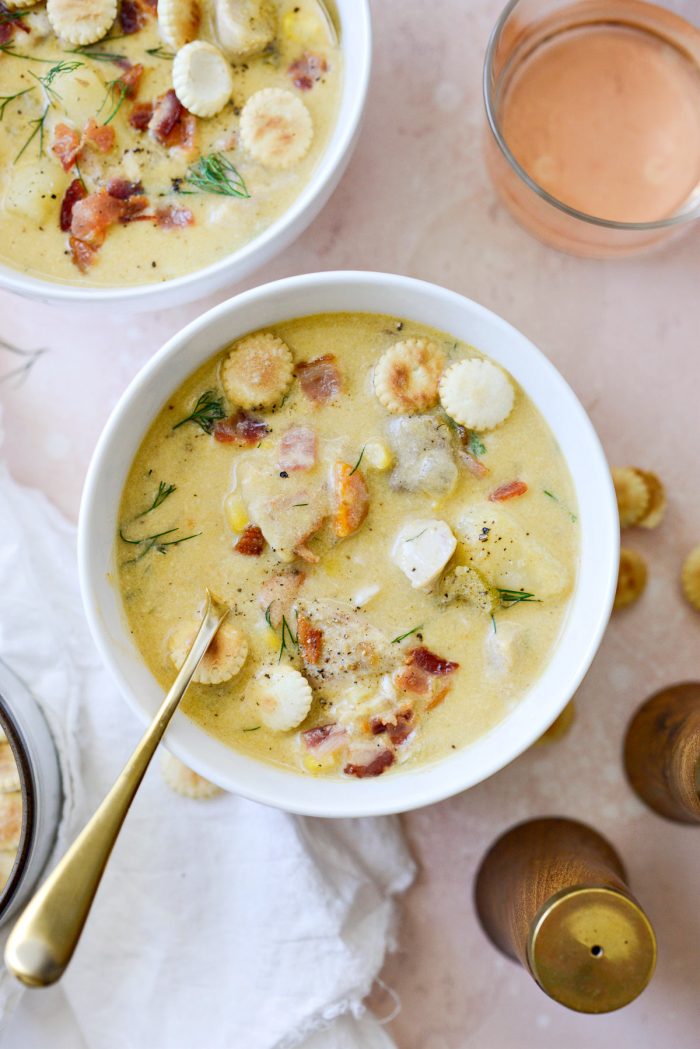 Enjoy! And if you give this Salmon Chowder recipe a try, let me know! Snap a photo and tag me on twitter or instagram! 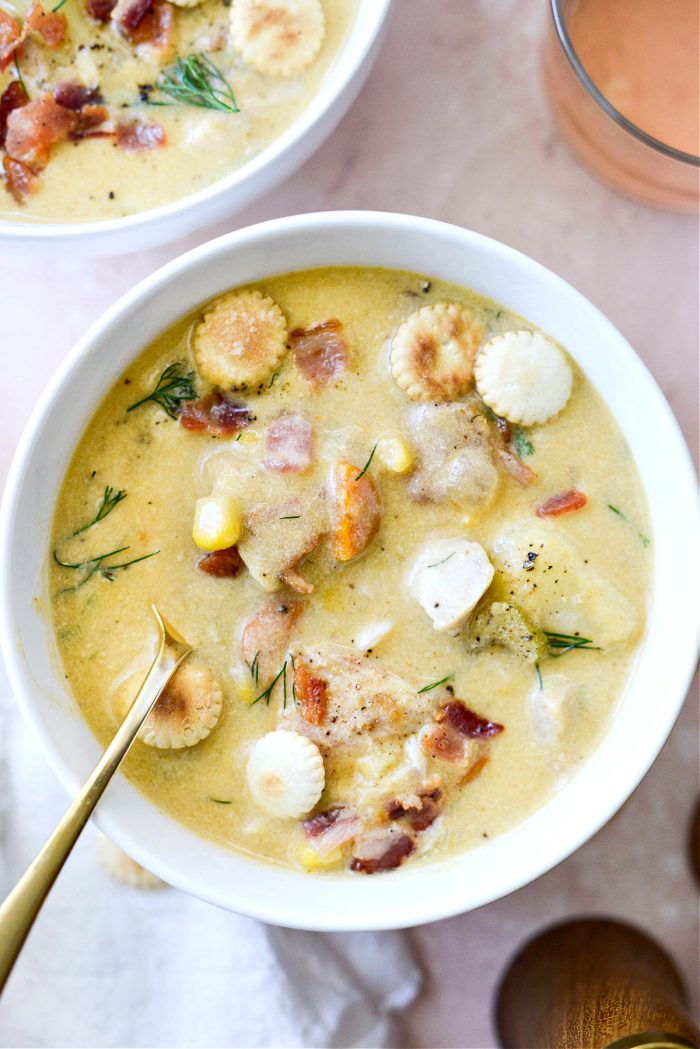