Gnocchi with bacon, leeks, fresh tomatoes and Parmesan tossed around with gnocchi. An extremely quick and delicious pasta dish.

I am happy to report that with only 10 days left until Christmas, I am officially finished with Christmas shopping. And right before a big snow storm too! So to celebrate my grand achievement {which has never happened before in my lifetime… EVER} I made a hella-delicious dish. These cold days have me craving warm, savory comfort food {and cookies}. I literally sat with a bowl of this here goodness and watched my youngest daughter play outside in the snow. Oh to be that young and immune to the freezing temperatures. Then I started reorganized my Pinterest page while listening to Christmas music and enjoying the ambiance of my festively decorated living room. It was quite the cozy day to say the least. I could live that day on repeat for a week and not get tired of it one bit. So this recipe literally only takes about 25 minutes. What took the longest was frying the bacon, but once that’s out of the way it moves very quickly. Start by rinsing some grape tomatoes. Slice them in half and quarter the larger ones. It’s about a cup of tomato halves. Then in a skillet over medium heat, crisp up 4 strips of bacon and then use a slotted spoon to transfer it to a plate lined with paper towel. Drain off all but two tablespoons of bacon fat and add in the leeks. This is one very large leek {about 1-1/2 to 2 cups, thinly sliced}. The leeks cook quickly in the bacon fat so it should only take about 5 minutes. Remove the leeks to a bowl when they start to soften. To a pot of boiling water, season with some salt and drop in a pound of gnocchi. Cook as directed on the package. Mine took about 2-3 minutes before they floated to the top, letting me know they’re done. Drain them into a colander… … then immediately pop them into the skillet along with a teaspoon of olive oil. Once they start getting a little color to them… Add in the leeks… Next season with a LITTLE bit of kosher salt and A LOT of black pepper. There’s a lot of salty components in the dish so go easy on the salt {you might not even need any of it at all!} Then add in the bacon. Next add in the Parmesan cheese. Who doesn’t love Parmesan?? Simply toss it around to combine. This makes for a perfect main dish. Try serving it up with a light side salad and maybe a glass of crisp white wine, hmm? Or pair it up as a side to chicken or a steak even, and you’ve got yourself a perfect meal to warm you up on these cold, winter nights. 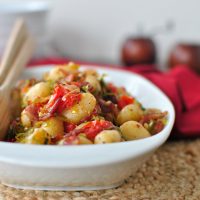 29 comments on “Pan-Toasted Gnocchi with Bacon, Leeks and Fresh Tomato” 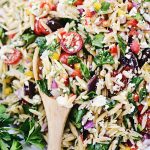