These Mexican Hot Chocolate Pecans are slightly sweet, only a smidgen spicy and a whole lot delicious! Perfect for your next holiday party!

One thing I love just as much as the whole salty-sweet thing… is the chocolate-cayenne combo.   I first saw this recipe on Tasty Kitchen and I was completely sold. Hook. Line. SINKER!! Whenever I find a recipe that has cocoa and cayenne pepper in the ingredient list I get all giddy inside. In this recipe the cayenne doesn’t really add a dramatic spice factor, but there is a slight warmth that creeps over the back of your tongue that is quite fabulous. These nuts are the perfect little accessory to any festive party or lazy rainy day for that matter. Like a pair of pearl earrings or black heels, they just simply work. They’re highly addictive with their crispy-cocoa texture and the subtle heat from the cayenne that’ll no doubt leave you and your guests pondering what, why and how are these are so dang fantastic? 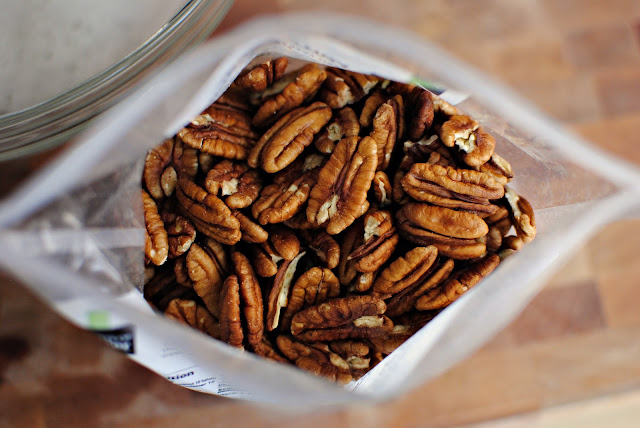 But if pecans aren’t your thing, try mixing it up with some almonds. Really any nut would work just fine! I brought these choco-spiced pecans into work and shared them with my friends, most of which printed off this recipe immediately, and I found myself wishing I hadn’t shared because in no time they were gone, fast. Too, too fast. 🙂 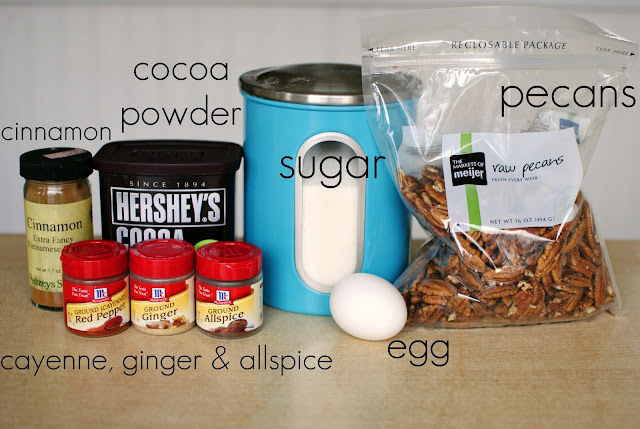 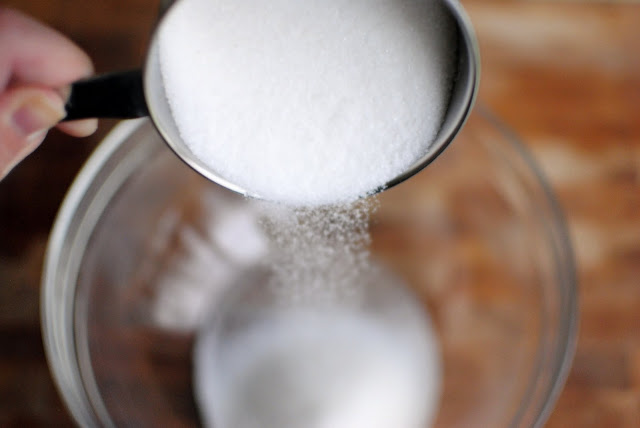 Start by adding regular ol’ sugar to a medium bowl. 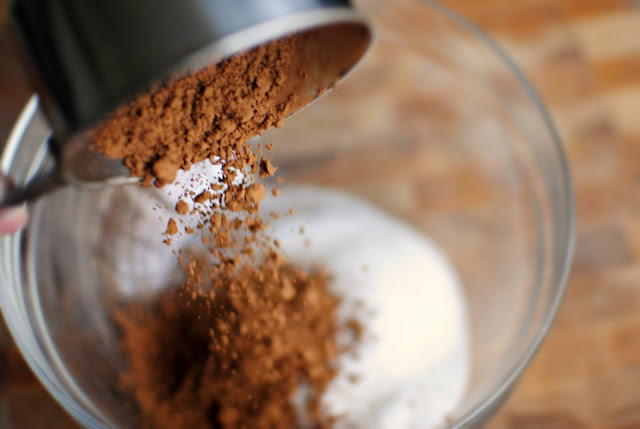 Then throw in some cocoa powder. Careful, that stuff ends up everywhere. 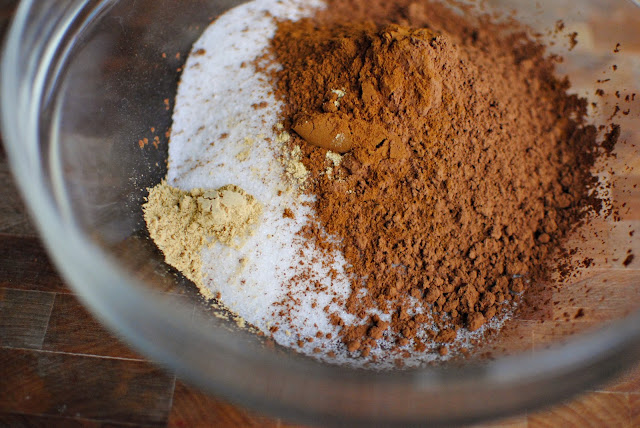 Then add in the teaspoon and a half of cinnamon and the half teaspoon of ginger.

And a pinch of cayenne and allspice. (Psst… this is the secret weapon!!) 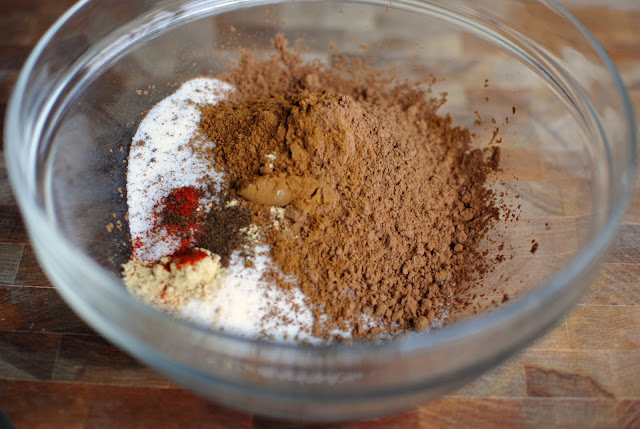 And that’s pretty much it. 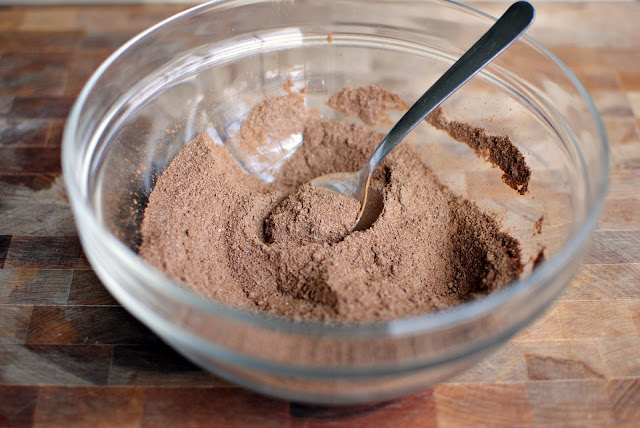 Just stir until combined. Go ahead and take a whiff, smells heavenly amiright? 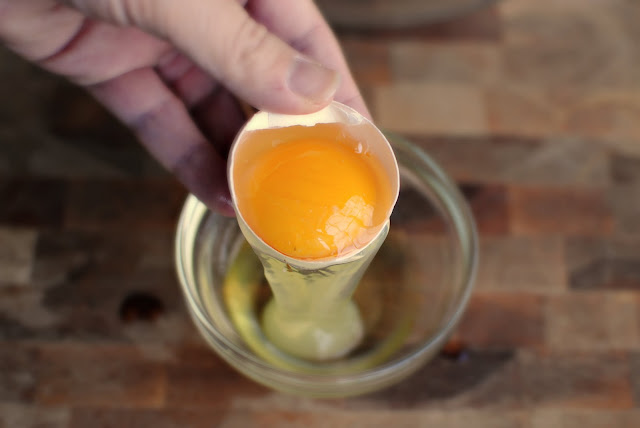 Now separate the yolk from the whites. 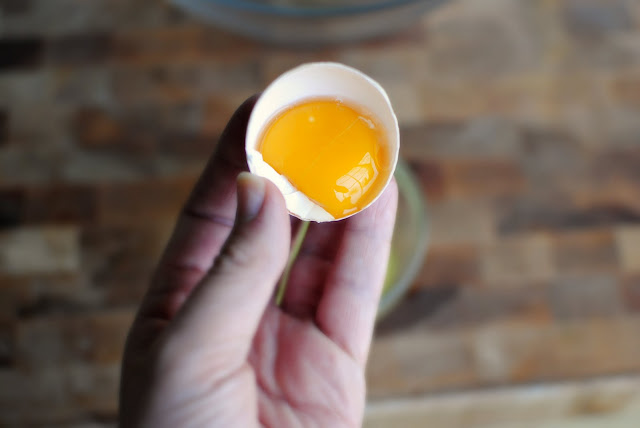 Discard the yolk or save it if you like to make butter cream frosting so you can then eat it with a spoon. 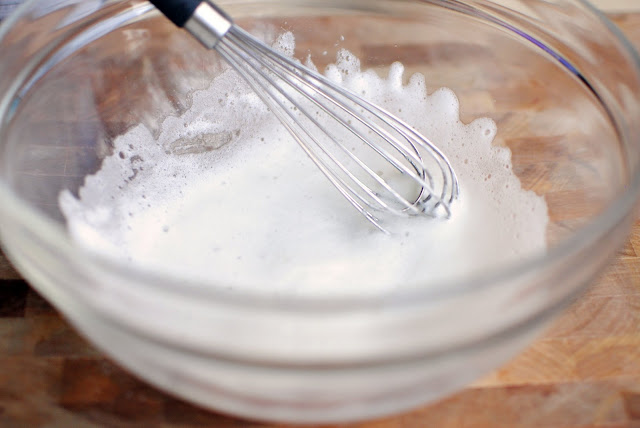 Whip up the egg white until small peaks form. 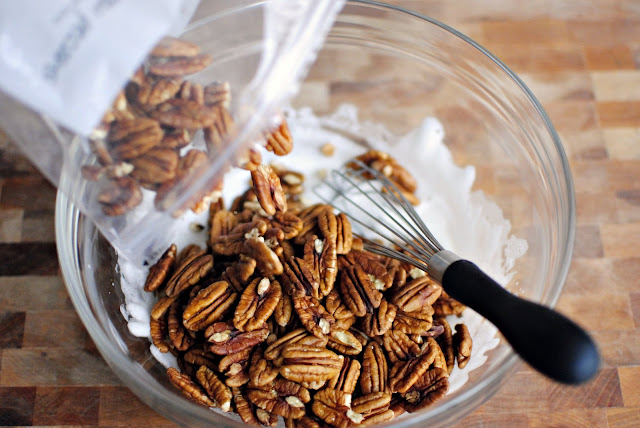 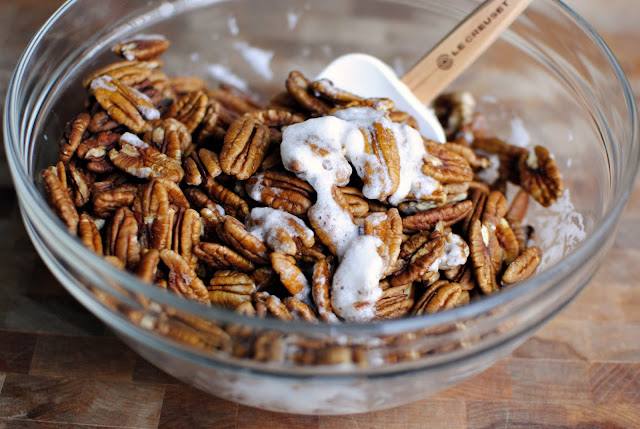 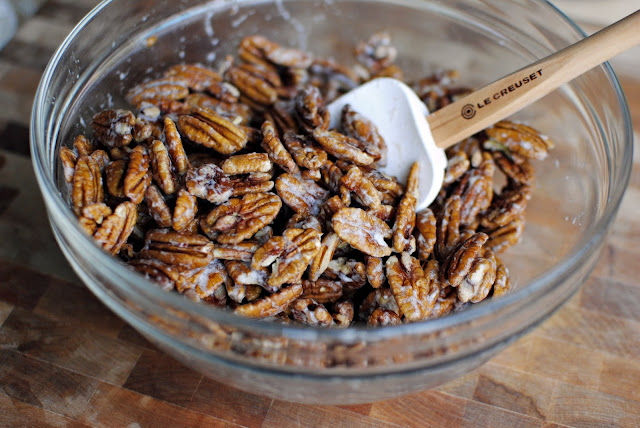 …until every nook and cranny is coated with foamy egg whites. 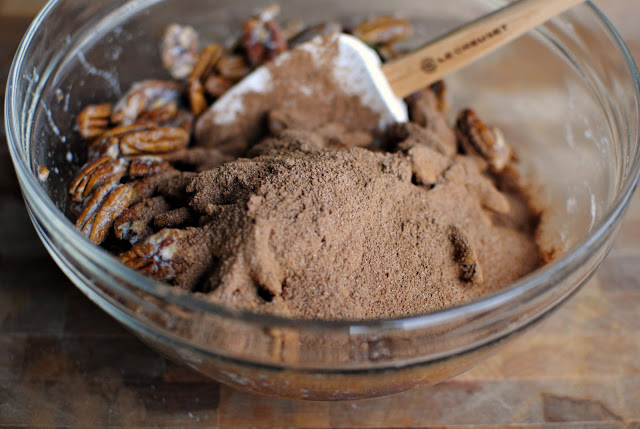 Add in the cocoa mixture. 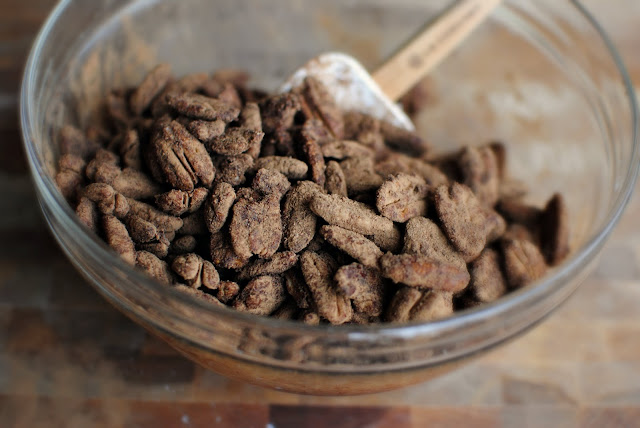 And toss until the pecans are well coated. You will have some left over cocoa mixture, but hey… that’s totally okay. 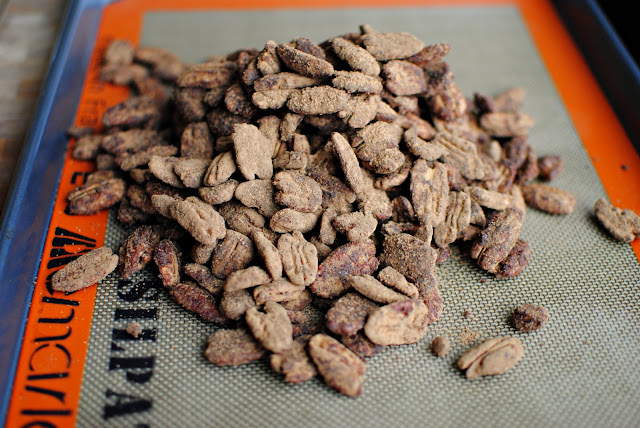 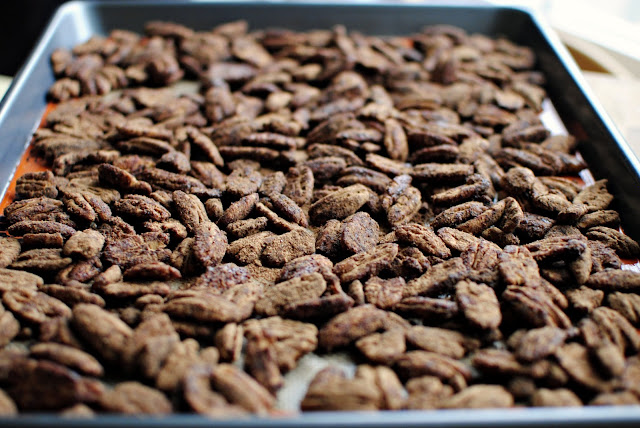 Spread the Mexican hot chocolate pecans evenly and pop them into a preheated 250° oven and bake for 20 minutes. 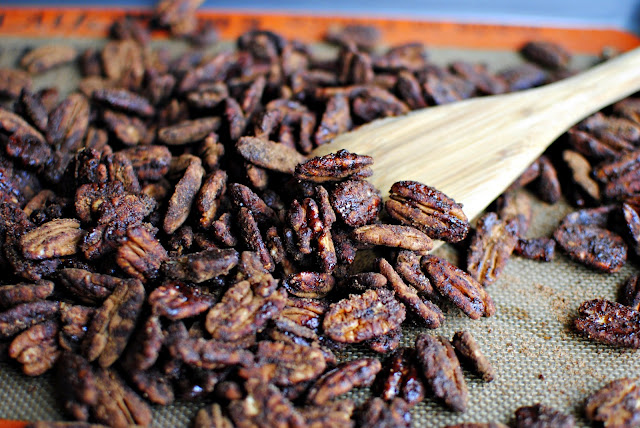 Remove, stir and bake for an additional twenty. *Notice they still look wet and sticky* 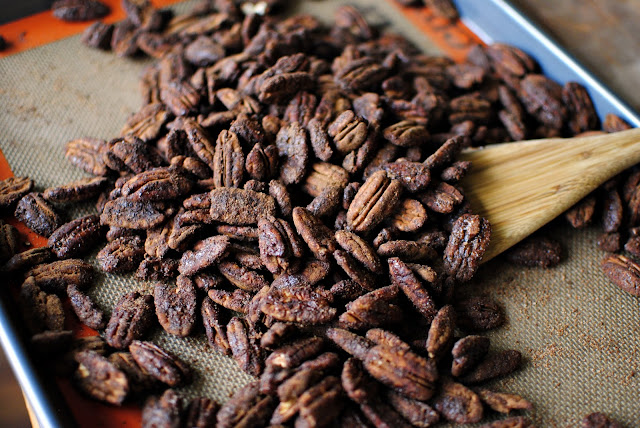 After that, the pecans were dried and perfectly toasted. The recipe calls for up to an hour, so use your best judgment. 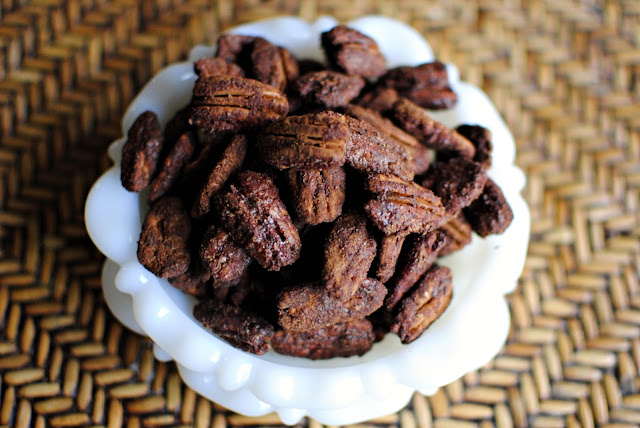 Store in an airtight container or if hosting a party, scatter these nuts in little candy dishes throughout your house. To share or not to share, that is the question!

Enjoy! And if you give this Mexican Hot Chocolate Pecans recipe a try, let me know! Snap a photo and tag me on twitter or instagram! 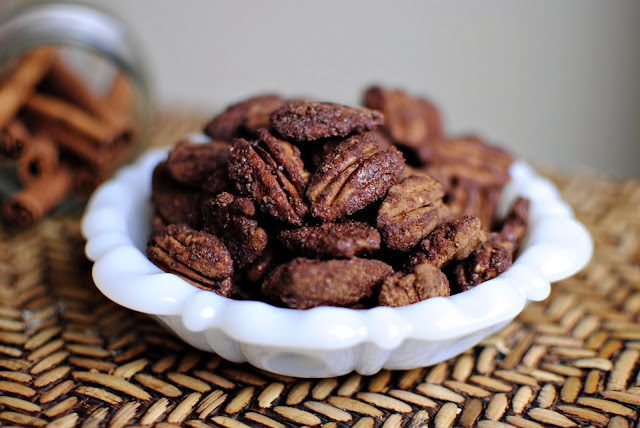