This Mexican Hot Chocolate is deliciously spiced with cinnamon, ginger, allspice and cayenne. A dollop of cinnamon whipped cream sends it over the top!

Well, we’re into the new year. We spent the eve with great friends and the first day of the year taking down the tree and packing away Christmas decorations. It’s strange because I always love having the tree up and the cozy lights twinkling. But the moment I have my house back in order I let out a sigh and am secretly {or not so secretly} glad the holidays are over.

After packing away Christmas, Pat built us a toasty fire, my girls were downstairs painting their fingernails, and I plopped down on the couch and we just relaxed. It was great. What would have made it perfect, would be a glass of this Mexican hot chocolate… spiked with KhaluaWHAT?! It’s creamy and chocolaty without being overly rich and it’s spiced with cinnamon, ginger, allspice and a pinch of cayenne for a little extra warmth.

Oh and instead of the traditional marshmallows I whipped up a homemade cinnamon whipped cream, so we could sport the ultimate chocolate and whipped cream stache. A little trick I learned from my mom to make whipped cream quickly, is to chill the bowl and beaters in the freezer for about twenty minutes or so beforehand. The cream will set up and thicken faster this way. It’s not crucial or anything, so if you don’t have the time, you don’t have to. Pour in a cup of heavy cream. Once the cream starts to thicken, but isn’t completely thick just yet… …Add in the 2 tablespoons of powdered sugar and a half teaspoon of cinnamon. And a 1/2 teaspoon of vanilla extract. Cover and keep cold in the fridge until ready to serve. Now for the cocoa. If you’re not interested in the spiced part, simply omit all of them or some of them. This hot cocoa is still delicious with the cinnamon and cayenne or nothing at all. Pour a half cup of sugar into a saucepan. Add in the quarter cup of cocoa to the same pan. Lastly a couple pinches of salt… Bring to a boil and whisk until the sugar has dissolved. …and two cups of heavy cream. And the half teaspoon of vanilla extract. Stir and heat through but do not re-boil.

Finally, serve in mugs with a dollop of the cinnamon whipped cream and a dusting of cinnamon. Creamy, dreamy, warm chocolaty goodness is just what you need to warm up on a cold day.

I really love the spice. It warms the back of my throat and is pretty delicious. My girls prefer it with just cinnamon, but they’re young still. Either way you make it, you can’t go wrong with a mug of Mexican Hot Chocolate. And maybe some of these Mexican hot chocolate toasted pecans too?!

Enjoy! And if you give this Mexican Hot Chocolate recipe a try, let me know! Snap a photo and tag me on twitter or instagram! 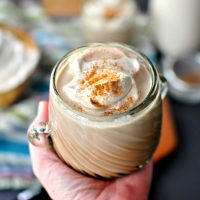 Deliciously spiced hot cocoa with a dollop of cinnamon whipped cream will warm you up on a chilly day! This recipe yields 4 servings depending on mug sizes.
Prep Time: 15 mins
Cook Time: 1 min
Total Time: 16 mins

FOR THE HOT COCOA: