In this delicious shrimp and grits recipe; fresh shrimp is cooked in bacon fat with leeks and white wine. Served on grits with, crusty bread and lots of hot sauce! I love shrimp and grits. Whenever I see that it’s on the menu at a restaurant, I order it.

Creamy grits topped with shrimp, bacon and hot sauce? Sign me up. This all starts with 1-1/2 pounds of shrimp. Shelling and de-veining shrimp ain’t easy. It takes some time, so allot a good 30 minutes or so to get the job done. First peel the shrimp, stopping right before the tail… or you can remove the tail all together, it’s your call. Gah! This girl needs some nail polish! Then from the tail… run your knife along the top side… just scoring it a little and not going the whole way through. I really hold the shrimp in my hands to do this, but it’s a leeeetle hard doing that while holding a camera. I know this is totally gross, but you need to remove the ah-hem digestive tract. Yup… with your fingers, just pull it out {YOU CAN DO IT!}. I always give the shrimp a thorough rinse afterwards… just to be extra careful. After I washed my hands 26 times, I moved on to the veg-prep. I diced up 1 small green pepper, 1/2 a yellow onion and 1 leek. You only need 2 tablespoons of the diced leek, so only buy one. I trimmed off the white and dark green parts of the leek, quartered it and diced it up. Then I popped it into a bowl of cold water and swirled it around to release any of the dirt, which will fall to the bottom of the bowl. Then make the grits. Simply follow the directions on the back of the package. I used Bob’s Red Mill stone ground, which called for 3 cups water, 1/4 teaspoon salt and 1 cup grits. But be sure to follow your directions on the kind of grits you’re using. After I cooked the grits, I put a heavy lid on the pot and pulled it off of the heat and got going on the shrimp part. In a cast iron skilled add 12 slices of applewood bacon that have been diced. Jenna’s recipe calls for cooking the bacon then crumbling it. But I found it a lot easier to cut up the bacon and fry it all at once. But you do whatever you like… either way you look at it, it’s bacon… crispy and glorious. Remove the crispified bacon to a plate with paper towel to drain, and set aside. Add the peppers, onions and leeks to the bacon fat. Yup, you heard right… do NOT drain out that fat! Cook the veggies until they are soft and the onions are translucent. Add in the shelled and de-veined shrimp… And cook 2-3 minutes per side. Remove the shrimp to a plate, for only a moment… Meanwhile you de-glaze the pan with white wine. I used Pinot Grigio… but she doesn’t specify so you can de-glaze-away with your favorite white wine. Then stir in 2 cups of half and half, bring it up to a simmer until it thickens, which is about two minutes. Add the shrimp back into the sauce… And finally season with salt and fresh cracked black pepper. I served up a portion of the grits into my bowl and ladled the saucy-shrimp over top, sprinkled a little green onion, crispy bacon and lots and lots of Frank’s Red Hot sauce. Total comfort food right. It was warm and filling and the hot sauce REALLY makes this. And I’m not the hugest fan of Frank’s and I still poured it on. SO so So good.

Enjoy! And if you give this shrimp and grits recipe a try, let me know! Snap a photo and tag me on twitter or instagram! 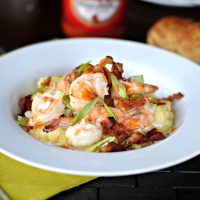 Although this dish was traditionally served for breakfast to shrimpers coming into shore after long weeks out at sea, it's one of my favorite comfort foods for dinners. Look for applewood-smoked bacon, or ask your butcher to cut your bacon extra thick.
Prep Time: 20 mins
Cook Time: 30 mins
Total Time: 50 mins

19 comments on “Low-country Shrimp and Grits”