Homemade green bean casserole is one of my favorite holiday sides. I’ve decided to ditch the condensed soup version and make it from scratch!

Homemade green bean casserole is one of my favorite holiday sides. Along with the dinner rolls of course. I seriously don’t ever remember not liking it. There’s just something about that creamy, bean-y casserole and those crunchy fried onions. I could literally eat the whole thing with a fork… or a shovel {let’s be real}.

Making homemade green bean casserole from scratch has been on my bucket list for this blog for quite some time. I didn’t want it to be super complicated or make the holiday any more stressful than it already can be. So First, I nixed the whole can of condensed soup part… we can’t have any of that. Instead I made my own version of condensed cream of mushroom soup way in advance and kept it in the freezer. So really all I had to do was blanch some haricot verts (ya know those thinner than regular green beans?).

Oh and I fried up some shallots. Awww yeah! Blanching isn’t as complicated as you might think. Get a deep 10-inch skillet or large stock pot. Bring it to a boil, season with salt and cook the beans for 3 to 4 minutes. Use tongs to remove the beans from the boiling water… In a nearby bowl of ice water, submerge the beans. This will lock in that purty green color so they won’t turn all drab. After a couple minutes in the ice water, remove the green beans and let them drain in a colander. Pat them dry and plop them into a large bowl. I kept my beans whole, but feel free to cut them in half for easier fork-stabbing and eating. Top with the homemade cream of mushroom soup, kosher salt and lots of black pepper. Pour in a half cup of half and half or whole milk… you know you could also mix the milk with the soup in a separate bowl… but I didn’t want to dirty anymore dishes. Toss around in the sauciness. Add the beans into a baking dish and pour the remaining goodies over top. NOTE: Once again I picked the wrong size baking dish. Seriously, you want one with room so you will be able to toss the beans around during it’s time in the oven. Don’t be like me.

Bake in a preheated 350 degrees for 30-40 minutes or until the beans are fork tender. Meanwhile, let’s make the fried shallots. Start with melting 4 tablespoons of butter in a pan over medium-high heat. Add in the sliced shallots, separating them with your fingers. I use two REALLY big shallots and it was about a heaping cup, sliced. But you can use more if you want! Stir every so often. You’ll want a deep golden color so watch these like a hawk. Keep frying and stirring and frying until they turn a beautiful golden color. Remove to a paper towel. They will crisp up more as they cool. Lastly, give the casserole one final stir, and then top with the fried shallots. Bake for 8-10 minutes, watch carefully so the onions don’t burn. I loved that this was so easy. I love that it tastes better than the original creamed soup version… AND the fried shallots rocked my socks.

Enjoy! And if you give this Homemade Green Bean Casserole recipe a try, let me know! Snap a photo and tag me on twitter or instagram! 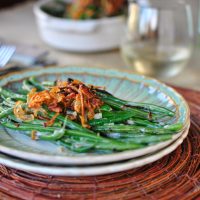