In this Homemade Apple Pie recipe, apples new partially cooked first, and cooedl before adding them in to the bottom pie crust. Doing this eliminates shrinkage while the pie is baking in the oven. Making pie filling this way means you won’t get that big gap of air between the piecrust and filling. So you’ll have copious amounts of apple filling goodness to go with your flaky pie crust and ice cream. There’s nothing better than a slice of warm homemade apple pie.

With coffee. On a cold and rainy fall day. And that’s exactly how it all went down. It was bliss. The weather here in Michigan has been dreary. Overcast skies, windy and rainy and just the perfect ambiance for pie.

Almost 7 years of blogging, 845+ recipes/blog posts and one cookbook later and I’m just now sharing my favorite apple pie recipe. What is my deal? And with one day remaining in September and before the pumpkin-spice-everything recipes start flooding the interwebs– or have they already started? — I wanted to end my favorite month of the year with pie. Homemade apple pie made from scratch. There’s no better way to do it.

Why is this my favorite apple pie? I love this particular recipe because you partially cook the apples first, allow them to cool before adding them in to the bottom pie crust. Doing this eliminates shrinkage while the pie is baking in the oven. Like that pre-shrunk off the shoulder tee that you can just throw in the drier. Making pie filling this way means you won’t get that big gap of air between the piecrust and filling. So you’ll have copious amounts of apple filling goodness to go with your flaky pie crust. And ice cream. 🙂 To make the filling, start with 3 pounds golden delicious apples.

Peel, core and slice them 1/4 of an inch thick.

Why golden delicious? Well, I’ll make a long story short. When I first was married (15 year ago) my mom gave me the Joy of Cooking cookbook, as she does all her daughters. You know the book, 10-inches thick with every recipe known to man, red ribbon… This book is where I learned how to make this pie. In the book, the authors state why golden delicious apple are preferred. They say (and I would agree!) that they hold their shape and don’t flood the pie with their juices. I would add that the flavor is perfection. Gala and Fuji apples are also good. But I wanted the best of the best. And I’ve never used anything other than golden delicious. Heat a large, and I mean large! 12-inch, deep sided pan on medium-high heat. Once hot, drop in the 3 tablespoons of butter… it should sizzle! Then add in all of the apples and toss to coat in the butter. Reduce the heat, cover and cook for 5-ish minutes or until the outside of the apples is tender but the middle is still a bit crunchy. Add in the tablespoon of lemon juice, 1/2 cup of sugar, 1-1/2 teaspoons of homemade apple pie spice (1 teaspoon of cinnamon can be substituted for the apple pie spice) I also add in a few extra shakes of cinnamon to the filling. Increase the heat to high, stir often until the juices are released from the apples and starts to thicken. Then I transfer the apples to a rimmed metal baking sheet, spread them out and allow them to cool. This only takes about 30 minutes or so. I usually roll out my pie crusts in the meantime. I rolled the pie crust out to a 12 to 13-inch round, placed it into a 9-inch deep sided pie plate, trim the edge with scissors so there’s an inch overhang and then pop it back into the fridge and roll out the next crust. Then I add the apples to the chilled bottom crust and brush some water or heavy cream around the overhang. Place the second crust over top, fold over the bottom crust and crimp the edges, brush the entire top crust with more heavy cream, make slits for air vents and sprinkle with lots of sugar.

Then the homemade apple pie is off to the oven to bake. Sometimes my crimps hold and sometimes they don’t. That’s how it goes and it’s also how you know it’s a homemade apple pie. 🙂

Remember me telling you how I hosted my first Thanksgiving last year? Well I also made this homemade apple pie just for my father-in-law. So I made him this same exact recipe and he said, and I quote “best pie he’s had in a long time” and coming from him, that meant the world.

Enjoy! And if you give this Homemade Apple Pie recipe a try, let me know! Snap a photo and tag me on twitter or instagram! 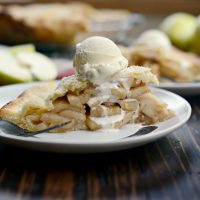 In this recipe, apples new partially cooked first, and cooedl before adding them in to the bottom pie crust. Doing this eliminates shrinkage while the pie is baking in the oven. Making pie filling this way means you won't get that big gap of air between the piecrust and filling. So you'll have copious amounts of apple filling goodness to go with your flaky pie crust and ice cream.
Prep Time: 35 mins
Cook Time: 40 mins
Additional Time: 3 hrs 45 mins
Total Time: 5 hrs