This fresh pear and brie salad with blackberry vinaigrette has fresh pear, brie cheese and is a beautiful and colorful salad that is absolutely delish! 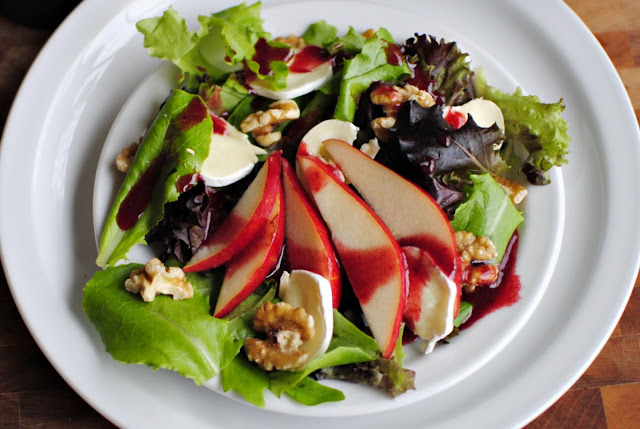 So while most Thanksgiving side dishes can be heavy, rich and loaded with butter and cream (which I totally love and respect)… maybe add a salad this year. Maybe add this salad!!

Because it’s bright, fresh and beautiful! 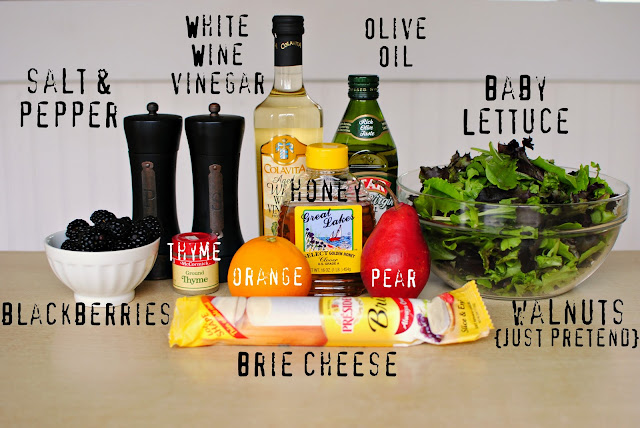 To Make This Pear and Brie Salad You Will Need:

I was inspired by a salad my friend ordered at a restaurant, it was a little different, okay a lot different. But it had blackberries and Brie in it! Oh how I love Brie! So while I was wondering the aisles of my grocery store, I picked up a few of the ingredients, invited my best friend over and made us this salad. We both had two helpings… and marveled in the combination of creamy Brie, fresh pear and blackberries. 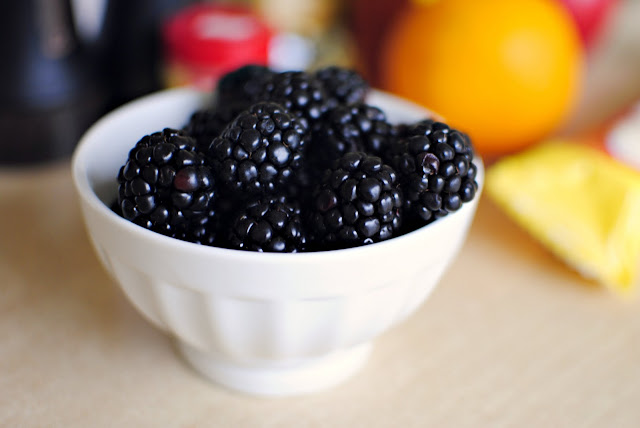 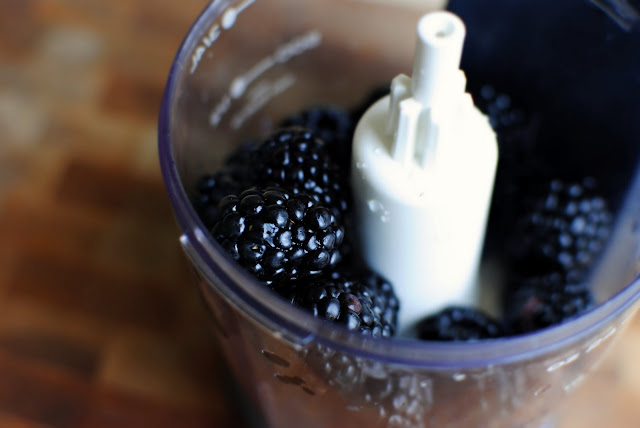 Next, throw a carton or a cup of blackberries into a food processor. 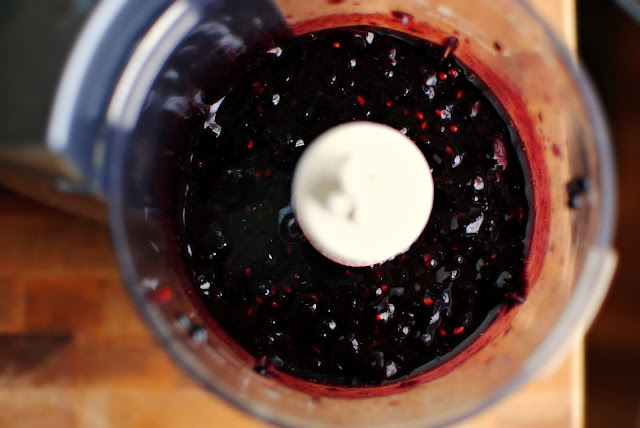 And then blitz them until it looks like jelly. Or… never mind. 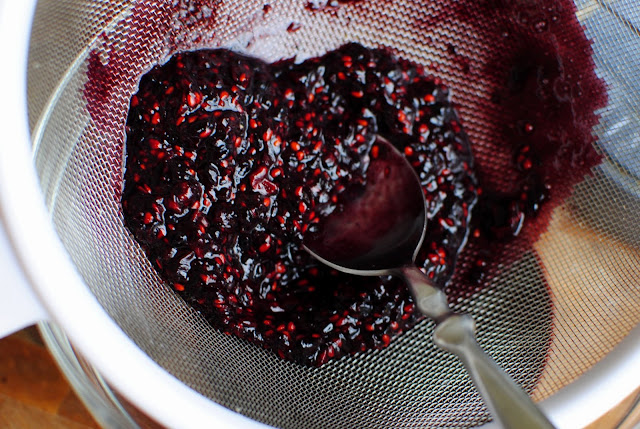 Next, press them through a mesh strainer to catch those nasty seeds and discard. Now… who sees the heart? 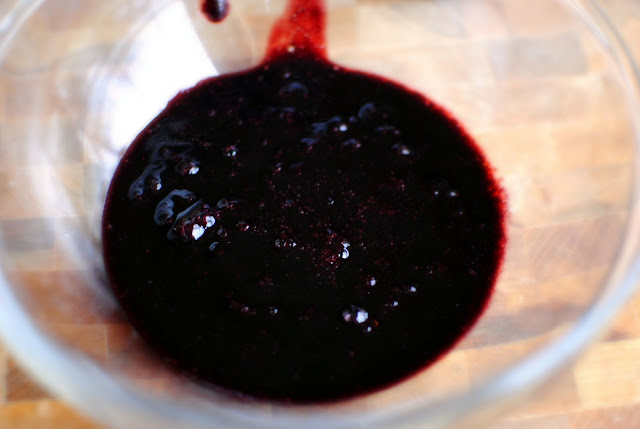 You should be left with a smooth blackberry puree. 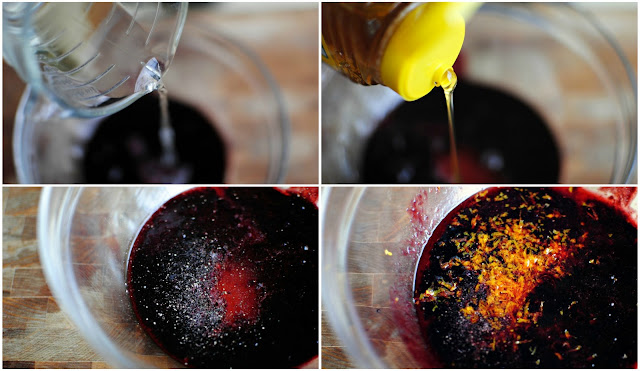 Next add in 1/4 cup white wine vinegar, 2 teaspoons honey, pinch of dried thyme, 1/2 teaspoon kosher salt, 1/4 teaspoon black pepper and the juice and zest of half an orange zest. Funny thing, when I was zesting the orange and I must have thought it’d be a good idea to rest the orange on my micro-plane and like a sack of bricks it fell into my dressing and sending my micro plane into the air, creating, well something that looks like… 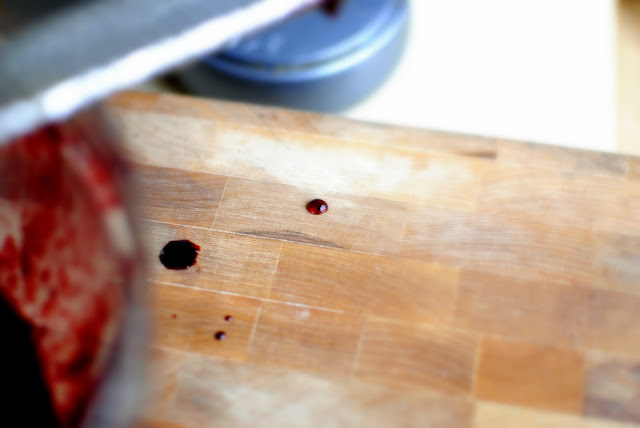 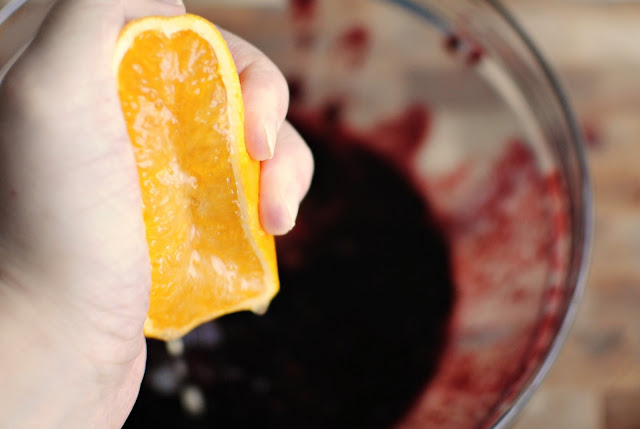 But I pressed on… and took my anger out on the orange by cutting it in half and squeezing the life out of it. Ahhh… I felt much better. 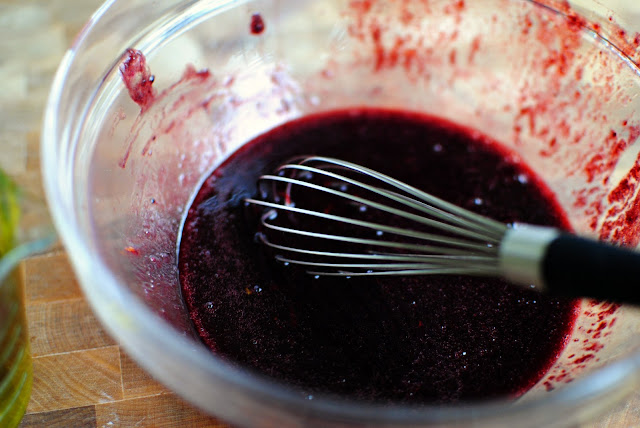 Whisk all those together. 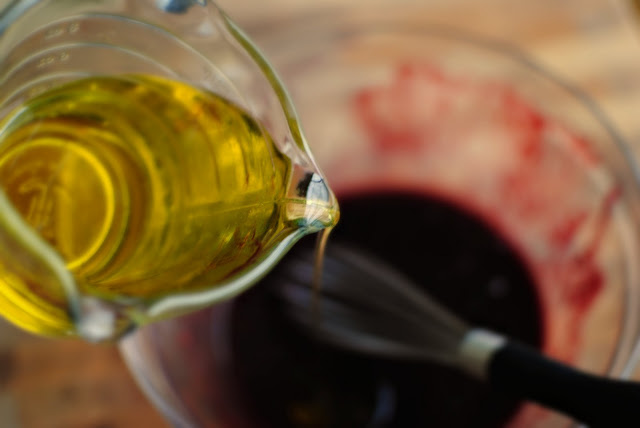 This is the tough part. My right arm can attest to it… SLOWLY and I mean S-L-O-W-L-Y stream in 3/4 cup extra virgin olive oil and whisk the bejesus out of it!! 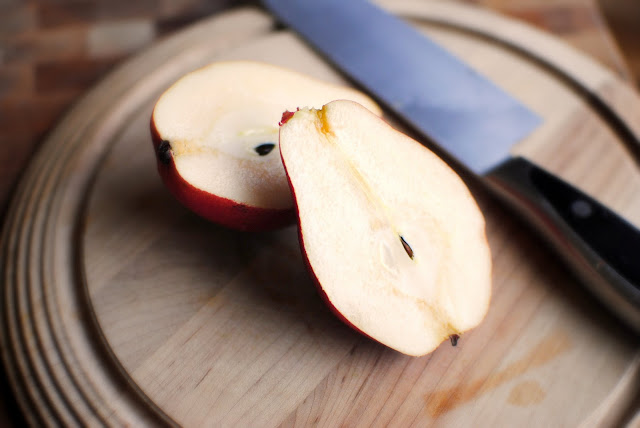 Next, set the dressing aside and quarter a couple pears. That’s about a quarter of a pair per person, usually. 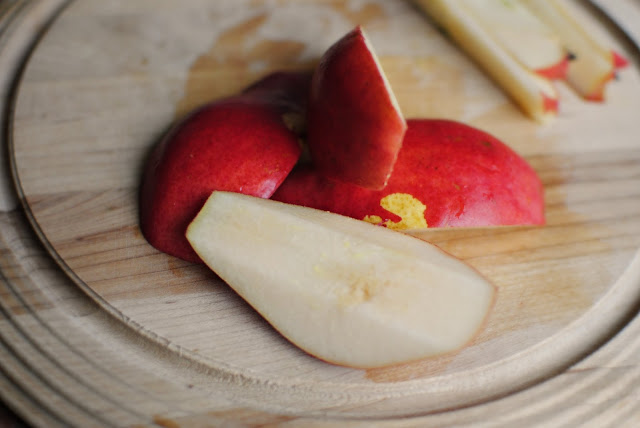 Then remove the center core. 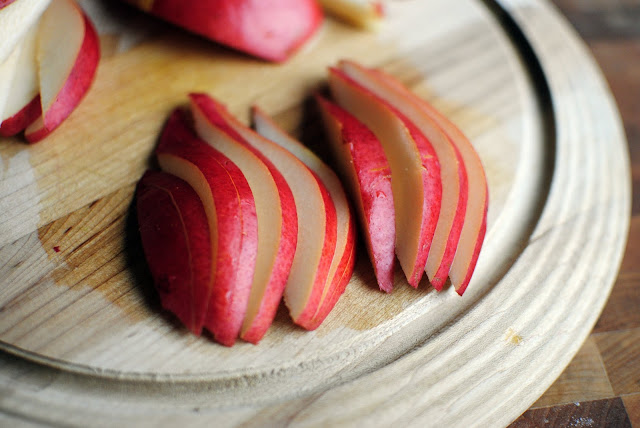 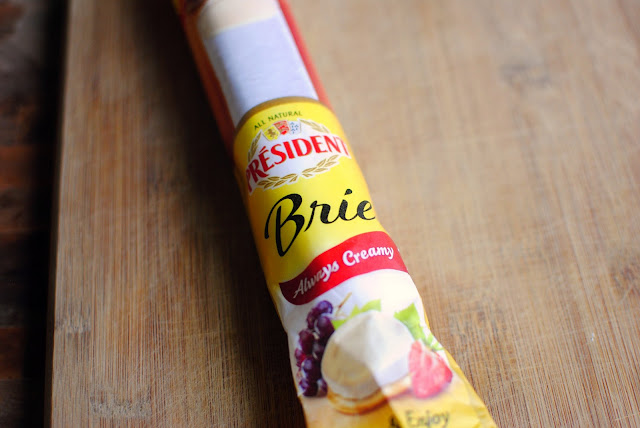 Brie. I love brie. Baked, not baked… I don’t care I love it. 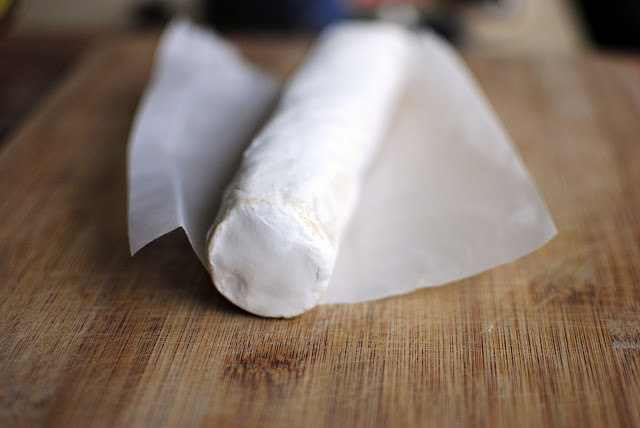 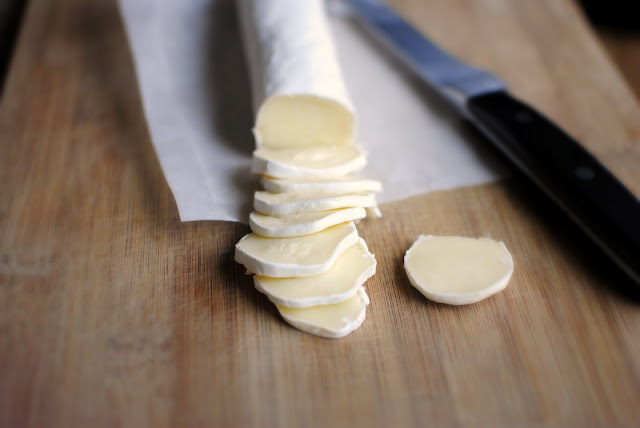 Them slice into disks. discs? Whichever, you can leave them like this, or break them up and scatter.

I like them whole, but that’s because I have a crazy obsession with brie and the more brie the better!

Next, build your salad by layering, spring lettuce, sliced brie, pears and sprinkle the pears with a little kosher salt. Next, top with toasted walnuts. 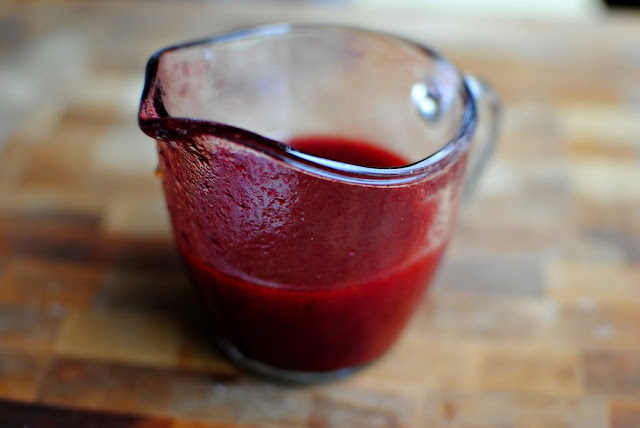 …and then finally drizzle with the blackberry dressing. I could seriously drink this stuff.

Enjoy! And if you give this Pear and Brie Salad with Blackberry Vinaigrette recipe a try, let me know! Snap a photo and tag me on twitter or instagram! 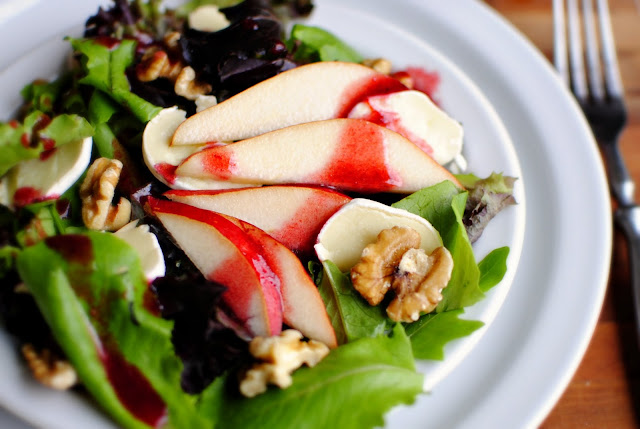 23 comments on “Pear and Brie Salad with Blackberry Vinaigrette”