This Croissant French Toast Bake is simple and deliciously decadent. Brown sugar, cinnamon and nutmeg soaked croissants are sprinkled with cinnamon sugar and baked until fluffy with a crackly sugar crust. Dust with powdered sugar, drizzle with maple syrup and serve with fresh berries. A stunning breakfast (or brunch!) for feeding a small crowd. Yields 8 servings. 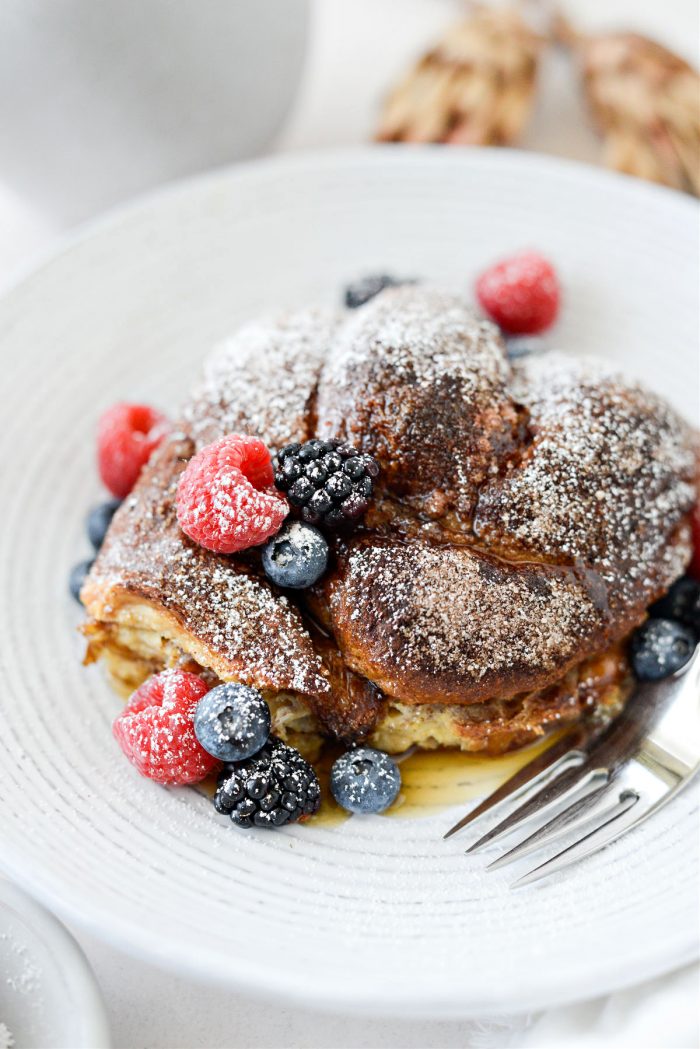 I love a good Brunch.

A mixture of sweet and savory goodies all laid out in a smorgasbord of breakfast heaven. I live for filling my plate with a little (or a lot) of each and everything. One thing I love to make for brunch is this croissant french toast bake. Croissants baked in a brown sugar, cinnamon and nutmeg custard with a cinnamon sugar crusted top? sign me up!

I promise you it’s ridiculously easy, yet so pretty and definitely a crowd pleaser! 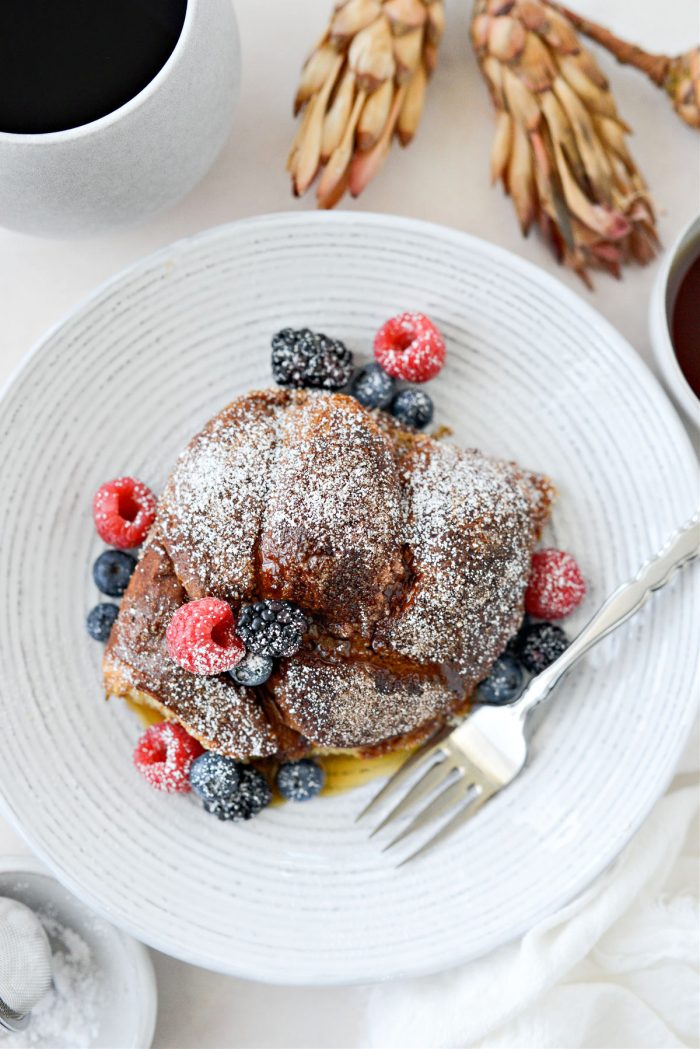 I mean just look at it. 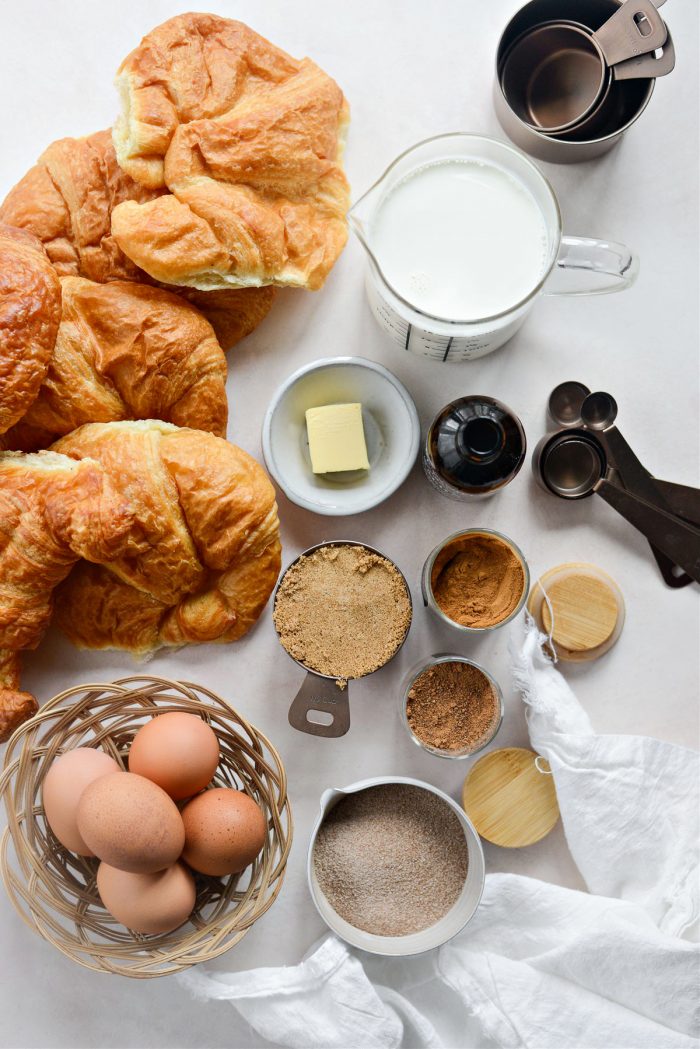 To Make This Croissant French Toast Bake You Will Need: 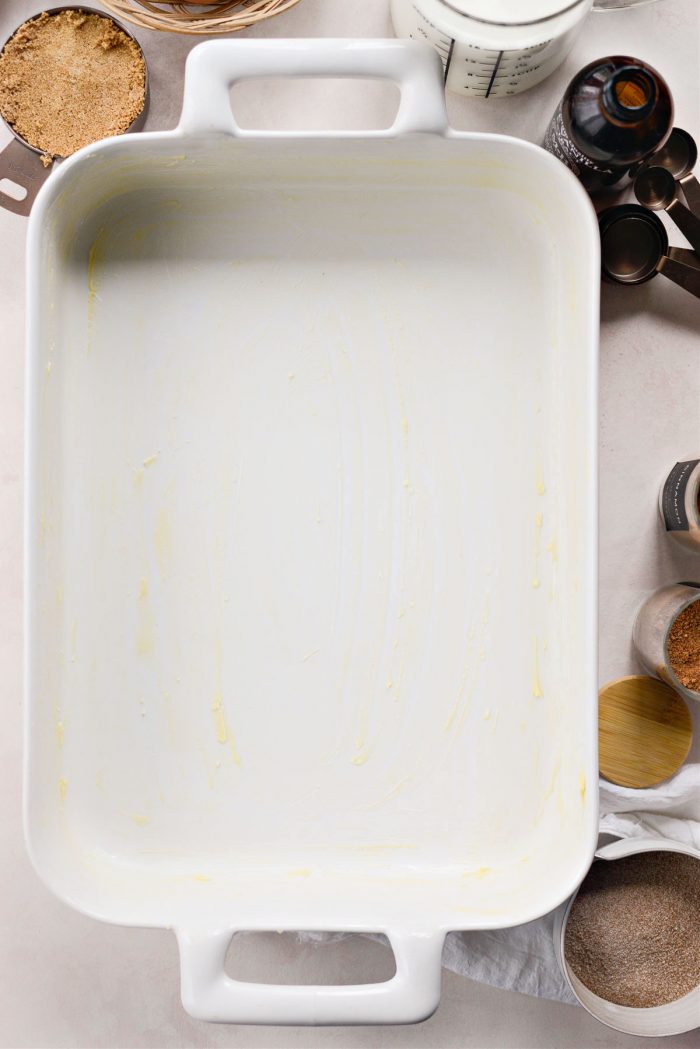 Start by generously greasing a 9×13 casserole dish with butter. 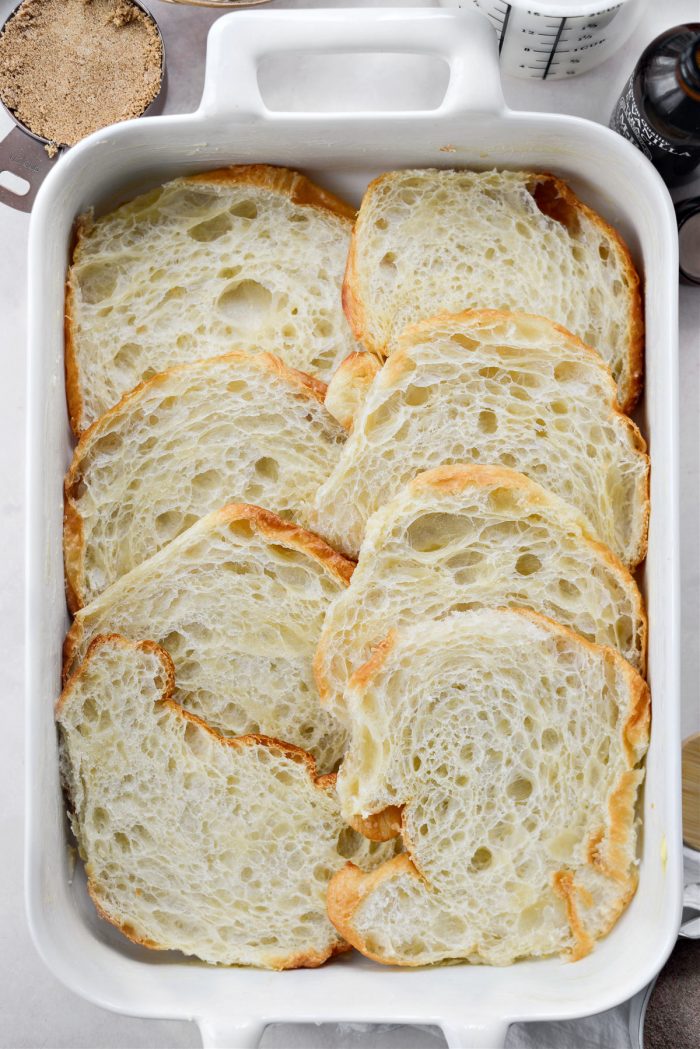 Stale croissants really soak up the egg mixture better than fresh moist croissants. Therefore, the day before I will set them out, uncovered and they will stale over time.

Cut the large croissants in half horizontally and placing the bottom halves, overlapping a bit, into the prepared baking dish. 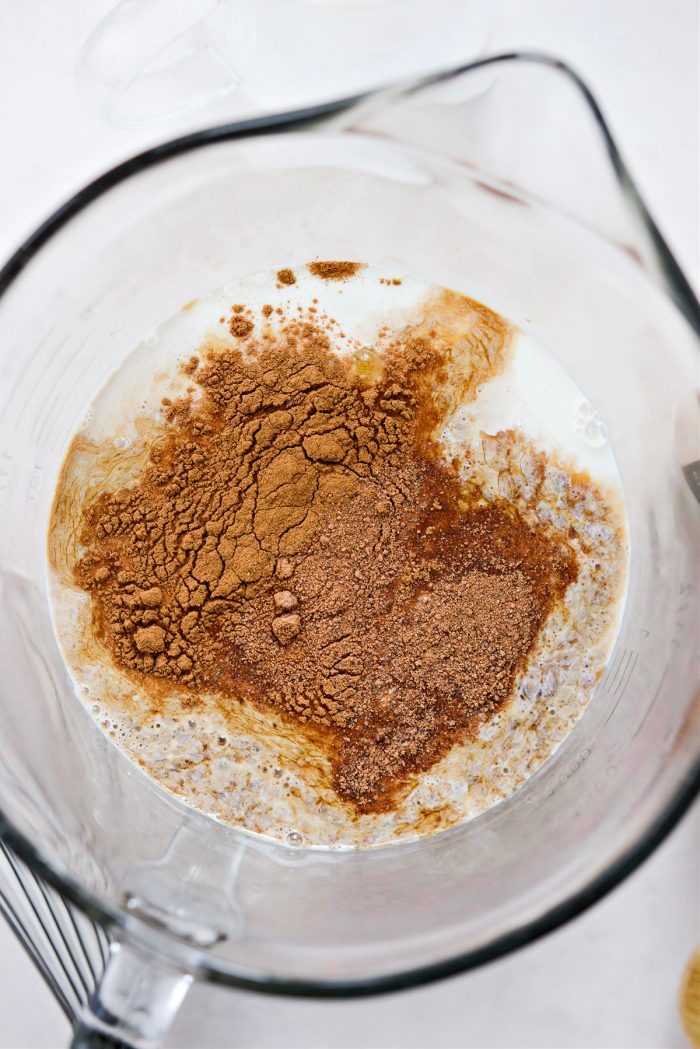 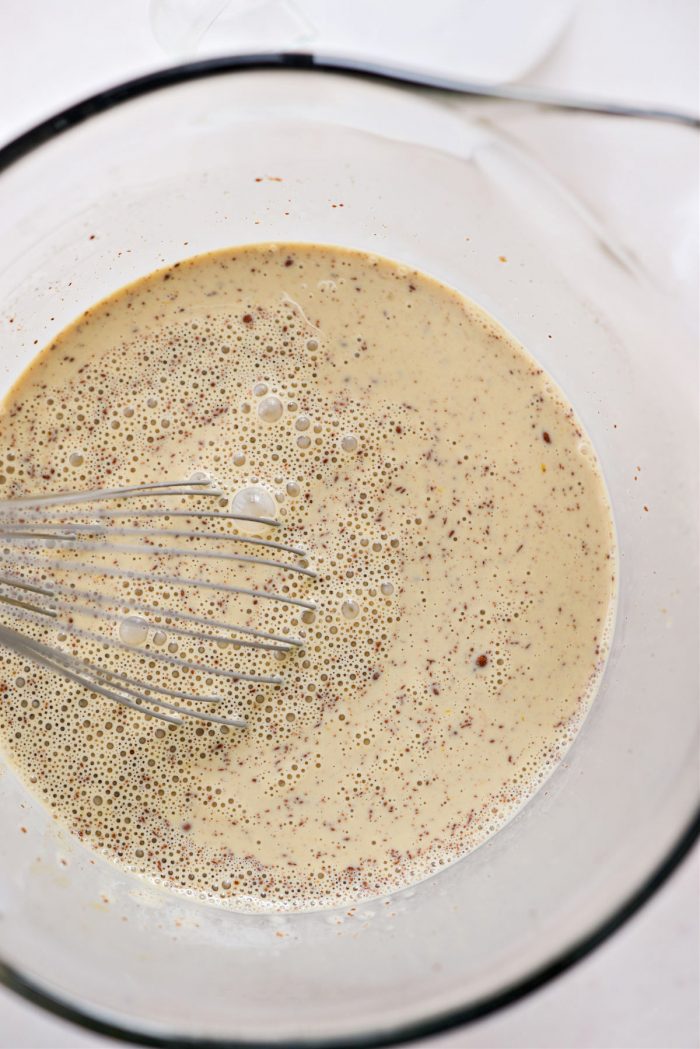 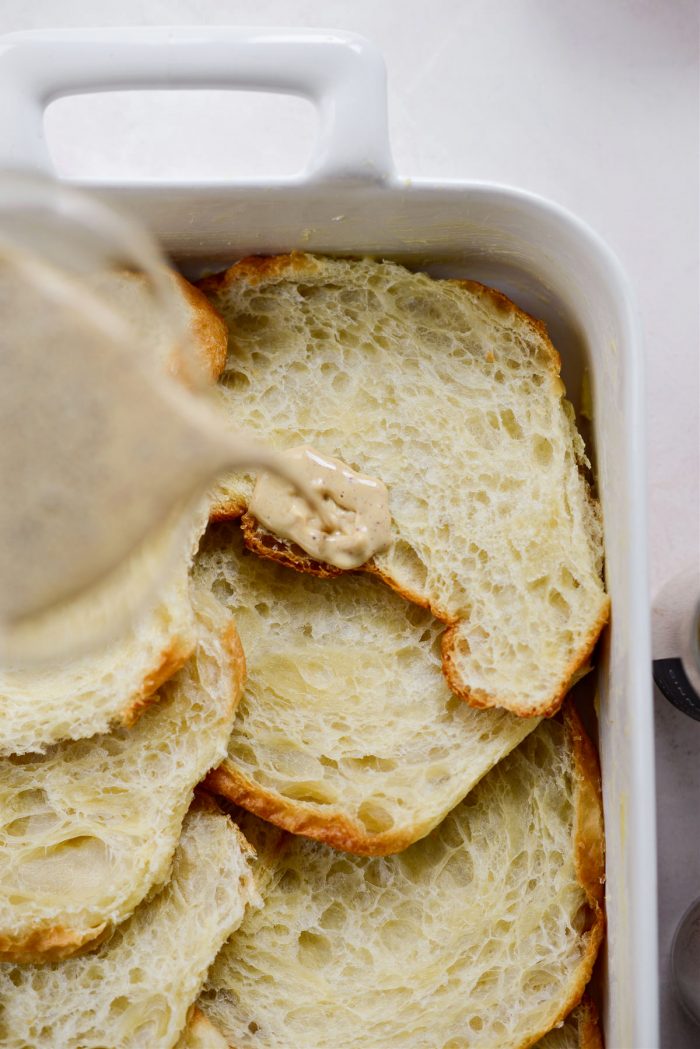 Pour half of the egg mixture over top of the bottom halves of the croissants. 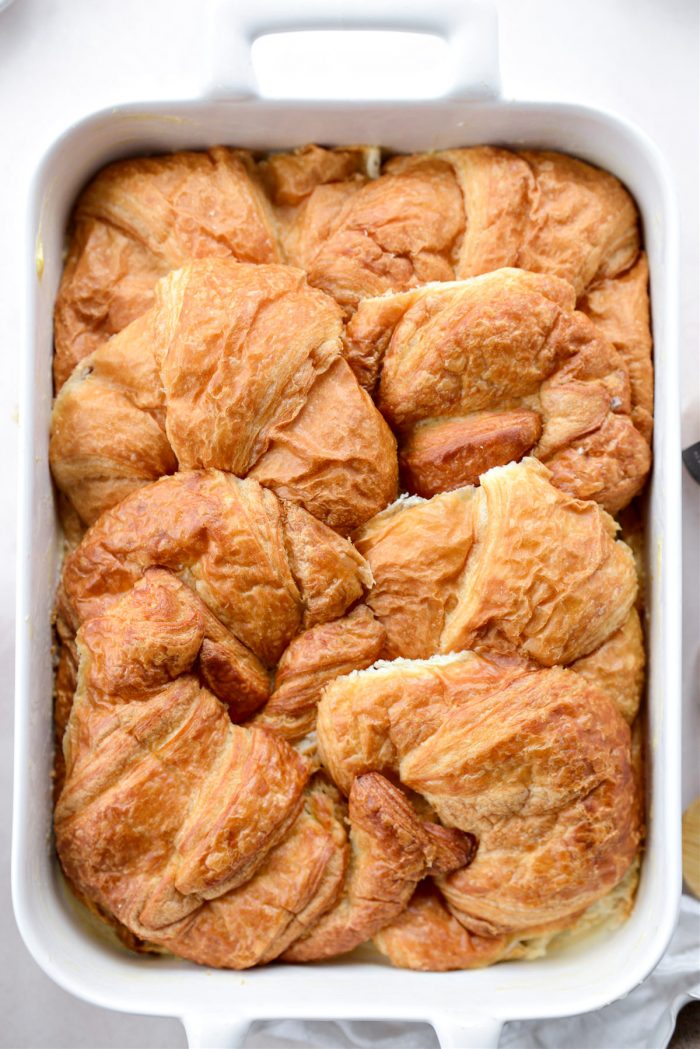 Arrange the top halves, overlapping a little to fill the pan. 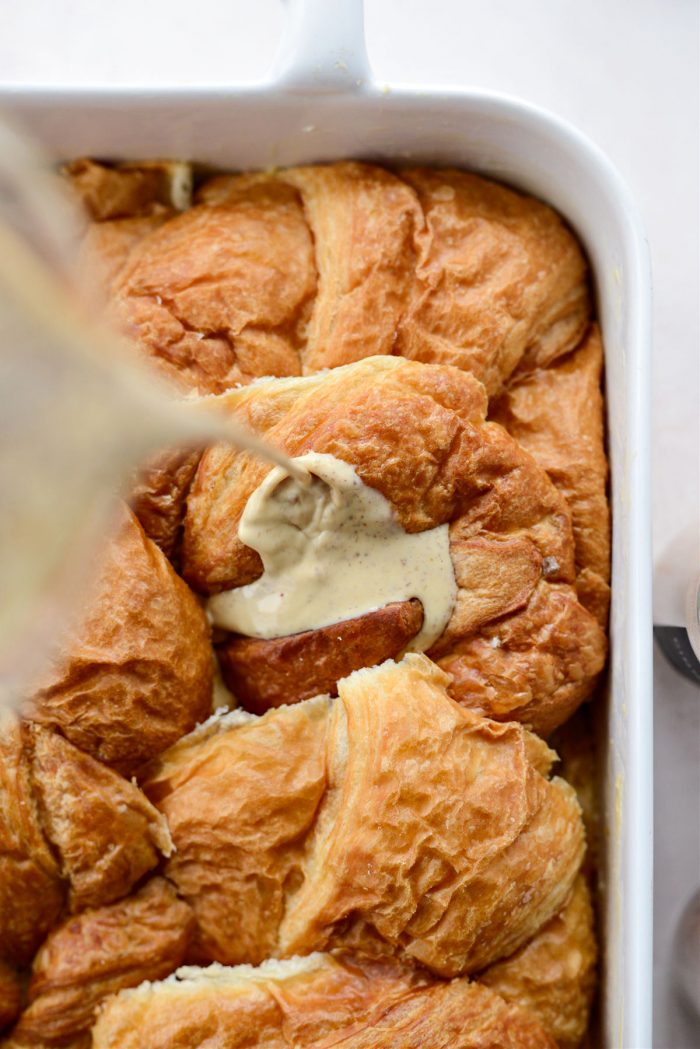 Pour the remaining egg mixture top of the croissants. 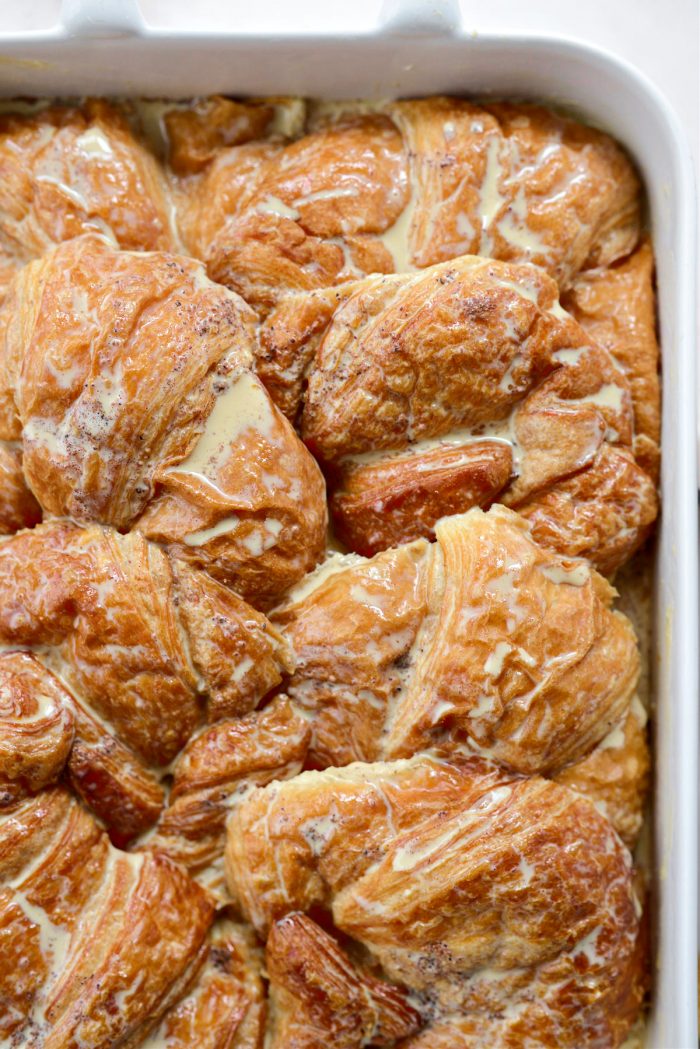 Be sure to cover the top evenly. 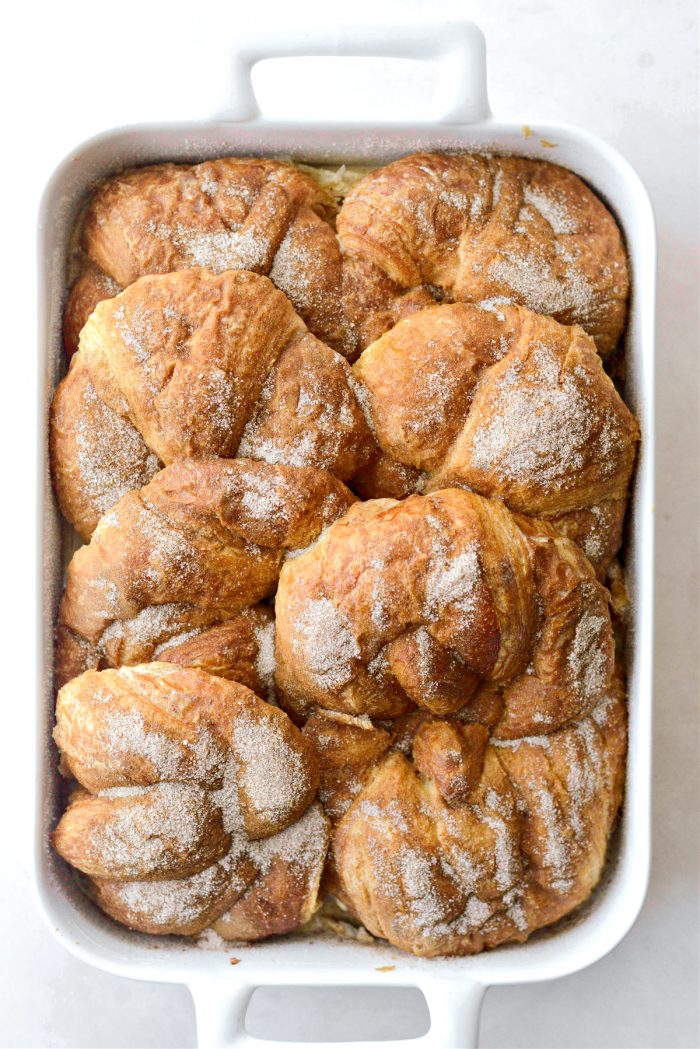 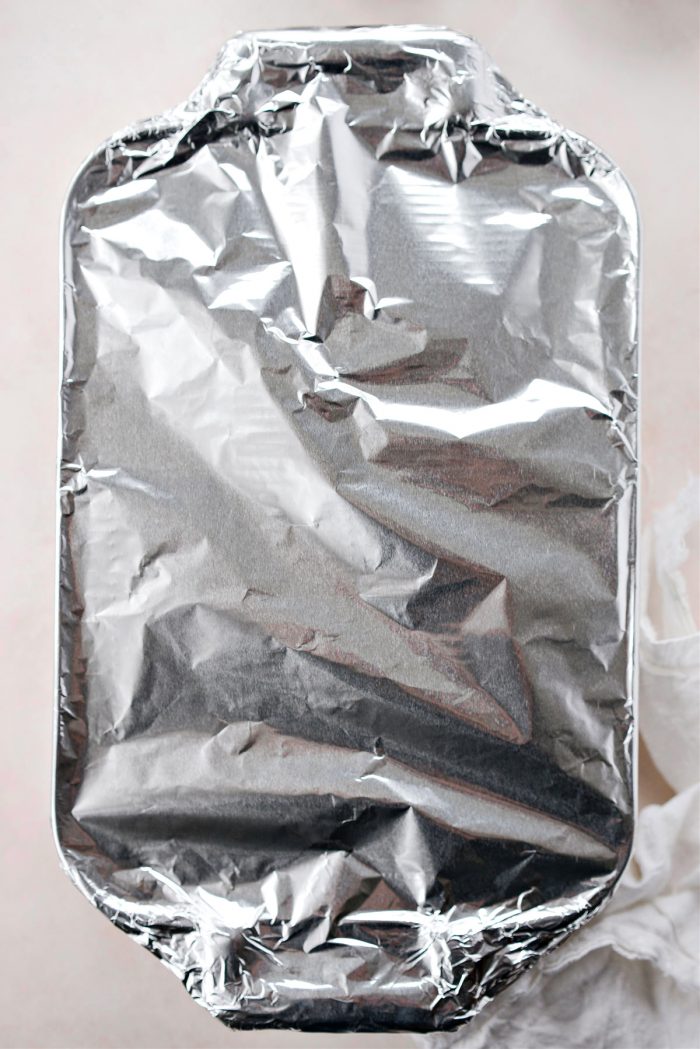 Cover the baking dish tightly with aluminum foil and let this sit on the counter for 1 hour.

Bake (covered) for 35 minutes, rotating the pan halfway to ensure even baking. Uncover and continue to bake for 13 to 14 minutes or until puffed up, the middle is set and the top is golden brown. 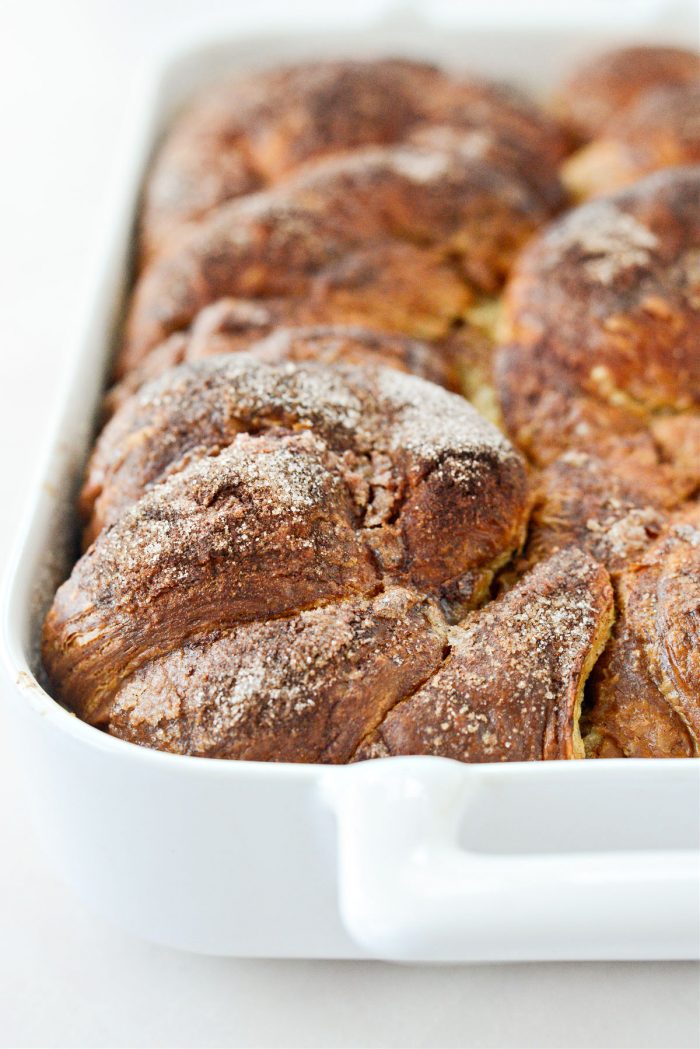 The cinnamon sugar gives this French toast casserole and deliciously crisp exterior that is to die for. 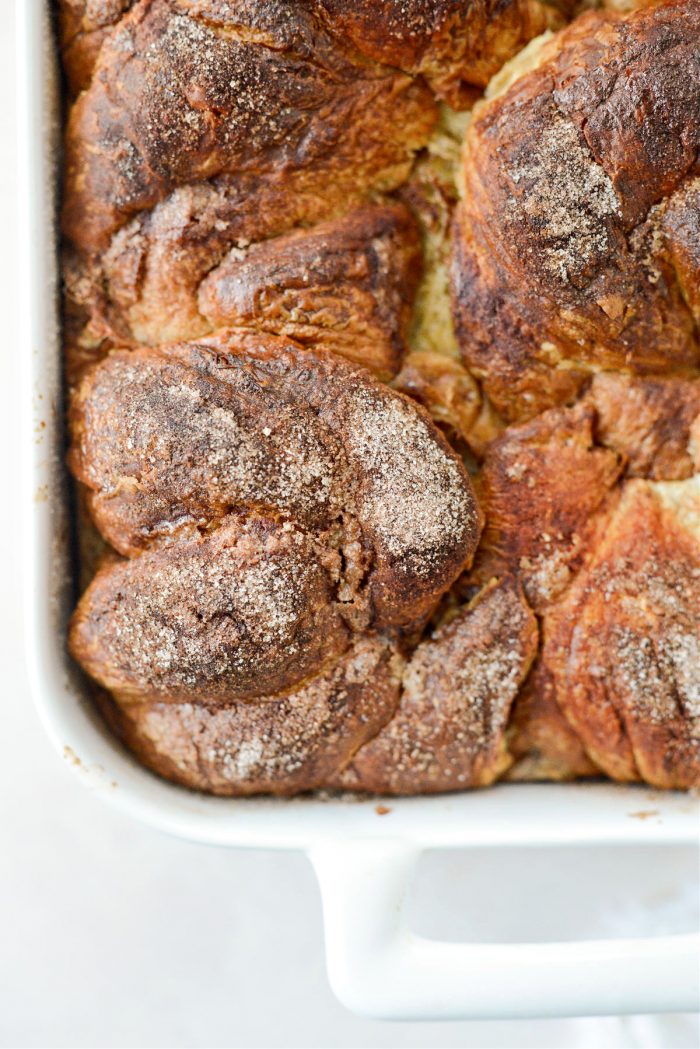 Alternatively, you can make this the evening before. Follow the same steps (up until sprinkling the cinnamon sugar over top) and refrigerate over night. Remove from the fridge 30 to 40 minutes prior to baking and sprinkle with the cinnamon sugar. Bake as directed.

Once baked, allow the croissant French toast casserole to cool for 8 to 10 minutes before serving. 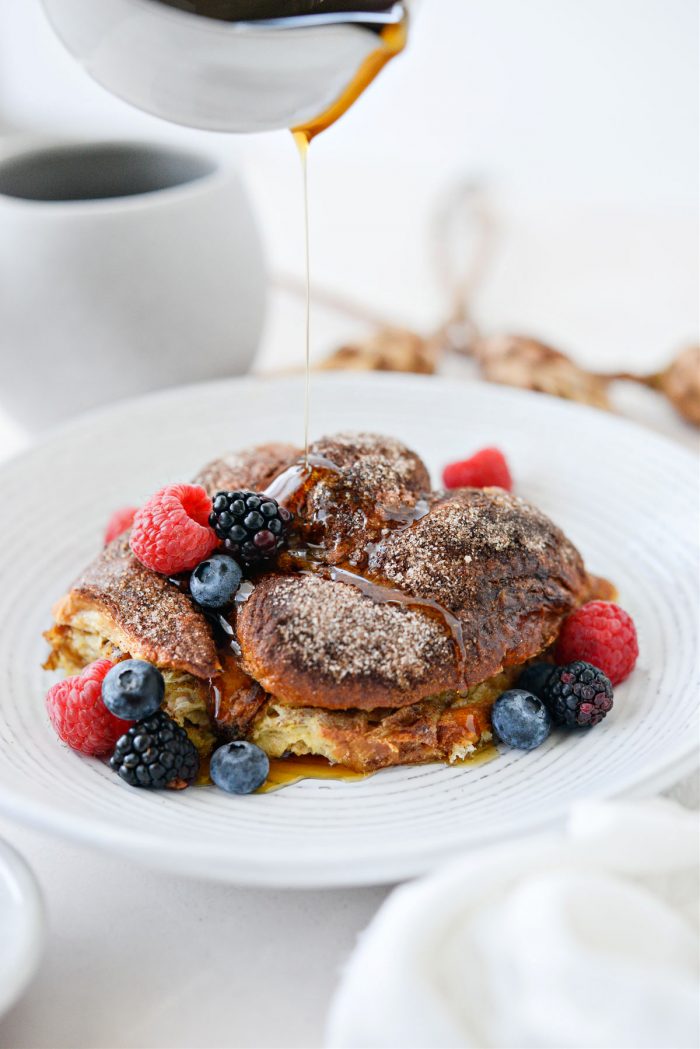 The cinnamon sugar crusted top is a delicious contrast to the custardy French toast. 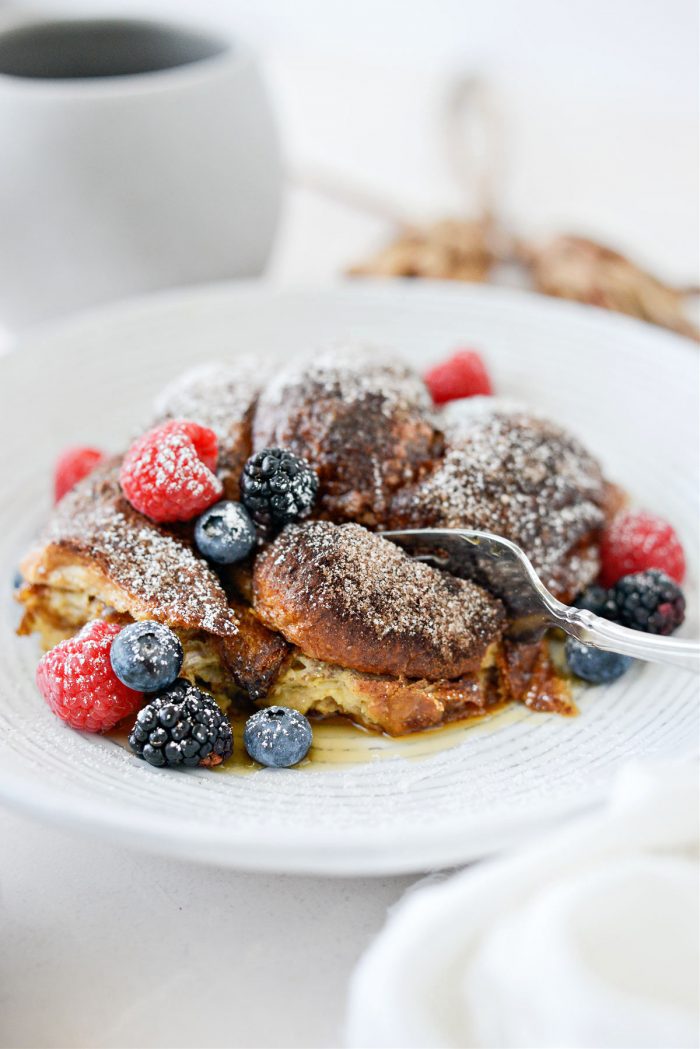 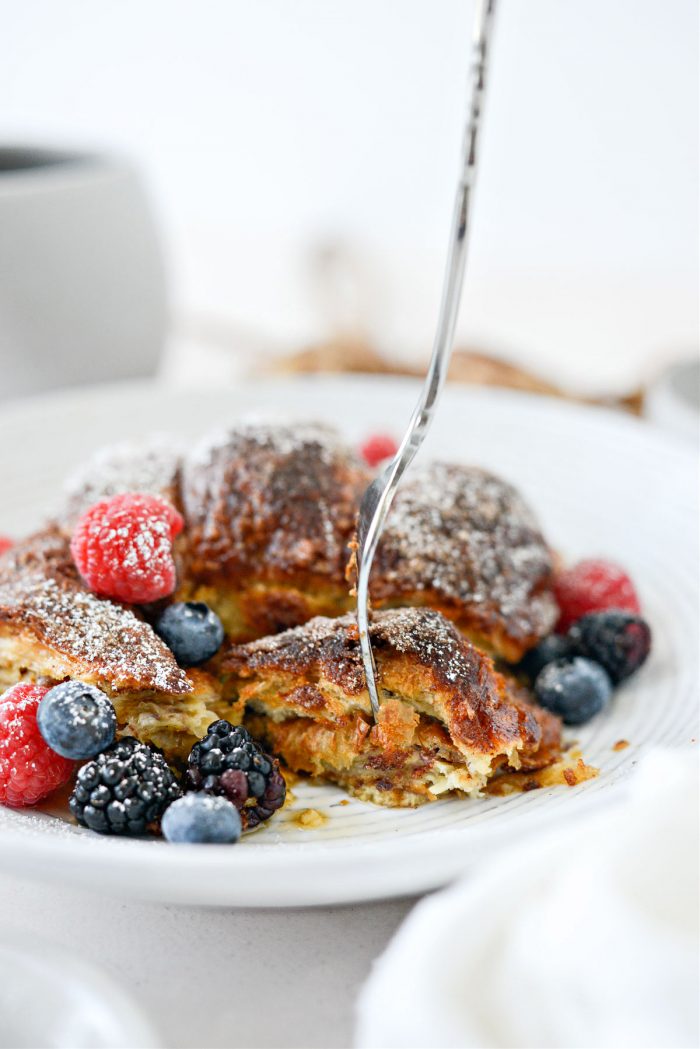 Enjoy! And if you give this Croissant French Toast Bake recipe a try, let me know! Snap a photo and tag me on twitter or instagram! 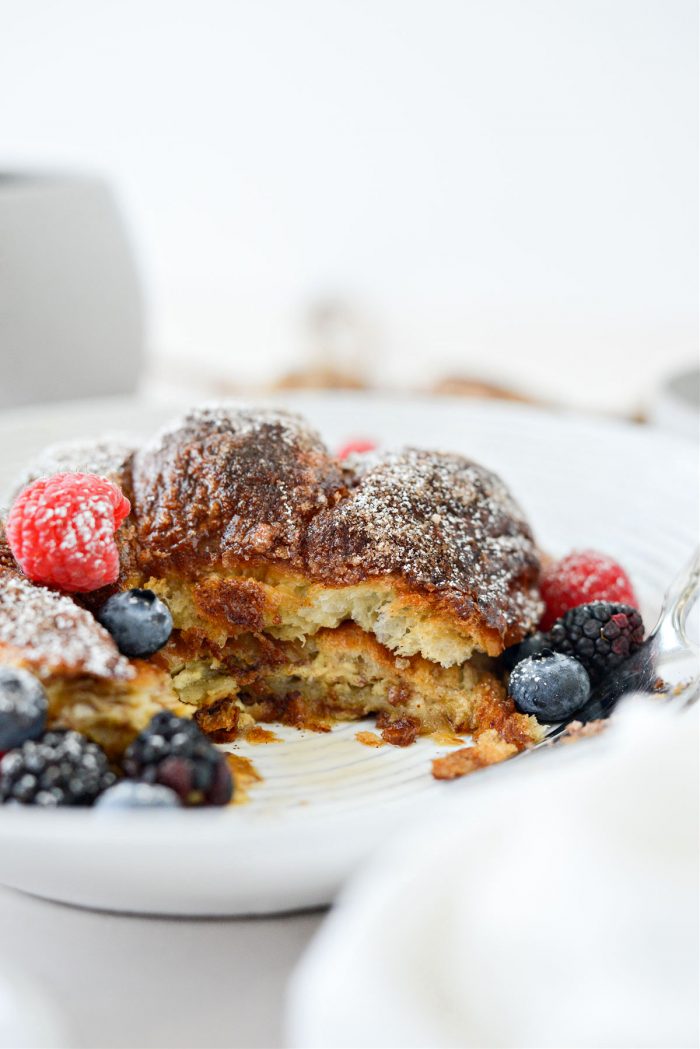 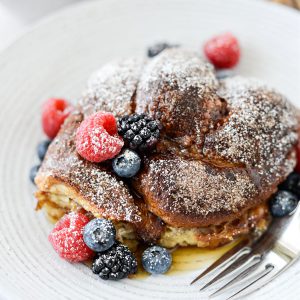 PREP THE DAY BEFORE:

IF MAKING IN ADVANCE: