Easy BBQ Chicken Drumsticks just in time for the 4th of July! In this super simple recipe, chicken drumsticks simmer in a quick homemade bbq sauce before being transferred to the grill for caramelization and a kiss of char. Serves 10 but could also serve 20 depending on the serving size. All I want is food that is grilled.

Like most, it’s too hot to heat the oven and you can forget about standing over a pot of anything on the stove. Sure, most of have central air but it’s so nice out and I strongly dislike having our air on (didn’t I wait all winter for weather like this?) and would much rather having the windows open so I can hear the birds and smell the fresh cut grass.

With that said, thank heavens someone invented the grill because that is where we do 99.9% of the cooking in the summer months.

Whether having a low-key barbecue or just looking for a delicious uncomplicated weeknight meal, this recipe for bbq chicken drumsticks is ridiculously simple and yields moist and flavorful saucy chicken. It starts with a quick homemade barbecue sauce in which you will brilliantly simmer chicken drumsticks (drumsticks because they are the most fun to eat 😉) until they are fully cooked. Right before serving, the drumsticks take a quick trip to the grill where you will baste them with the reserved barbecue sauce until sticky and caramelized. Have mercy.

Any leftover barbecue sauce and be frozen for later or use throughout the week with grilled chicken, steak or seafood. To Make This Easy BBQ Chicken Drumstick Recipe You Will Need: Bring the sauce to a low boil over medium-high heat. Using tongs, add 3 to 3-1/2 pounds of chicken drumsticks into the sauce. Reduce the heat, cover and simmer over low to medium-low heat for 30 to 35 minutes. Ta-dah! Fully cooked and now ready for the grill! Transfer the cooked chicken drumsticks to a rimmed baking sheet along with 1 cup of that barbecue sauce.

Use tongs and a wad of paper towel that has been dipped into olive oil to grease the grill grates. Brush with the sauce and repeat this until caramelized.

I cannot stress enough how important it is to grease the grates. Skin will stick, but it will be less if the grates are greased. The sauce is SO good! It reminds me of old school Open Pit when I was little. However, it’s been years since I’ve had that sauce but that’s where my tastebuds took me back in time to.

So GOOD. In under an hour you have made deliciously saucy chicken wings that will no doubt have you licking your fingers after! Enjoy! And if you give this Easy BBQ Chicken Drumsticks recipe a try, let me know! Snap a photo and tag me on twitter or instagram! 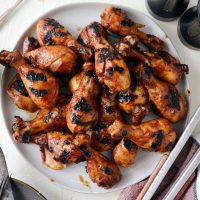 These are the easiest BBQ Chicken Drumsticks! Chicken drumsticks simmer in a quick homemade bbq sauce before being transferred to the grill for caramelization and a kiss of char.
Prep Time: 20 mins
Cook Time: 30 mins
Total Time: 50 mins