I love these baked asparagus fries! Fresh asparagus is rolled in Parmesan cheese and baked until crispy. Dipping them in a homemade lemon garlic aioli is the ultimate. 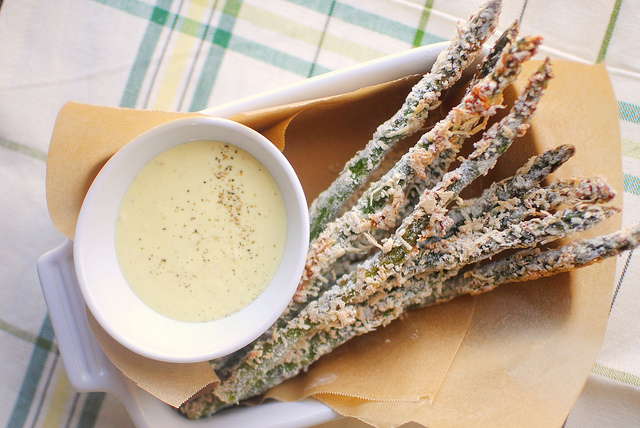 Have I ever told you about the time I made asparagus baby food? Yeah… sounds delicious doesn’t it? Uhhh yeah-no. The only thing that came out of steaming and shocking and puree-ing and straining asparagus was a house that smelled like you-know-what. Lucky that was long ago and only a few short months later the stench was gone and I could resume to eating asparagus again. phew. 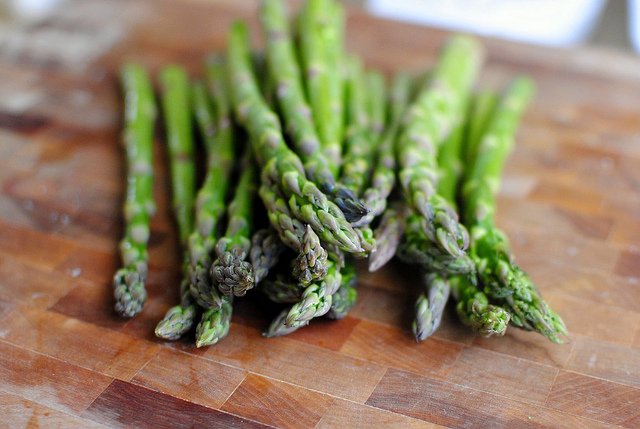 Don’t ya think there are two kinds of people in this world. Ones who like this veg, and ones that absolutely do not. I hope you’re an asparagus fan, because this snack is the bestest. But, if you’re unsure if YOU fall into one of those two categories, this would be a great recipe to try and find out! I promise… I won’t let you down. 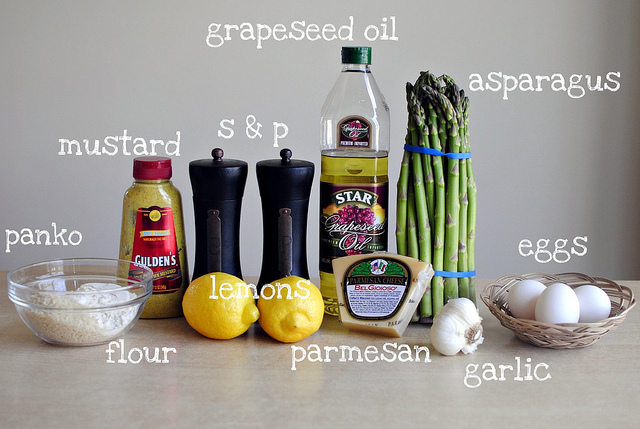 If you’re from Michigan and if you’ve ever visited the West side of the state in the spring-summer months you’ll see a zillion signs for fresh asparagus. Over by Lake Michigan is  pretty much the only area the asparagus can grown here, and there’s only two other states that grow more than Michigan! And let’s face it… local, farm fresh produce is the BEST. 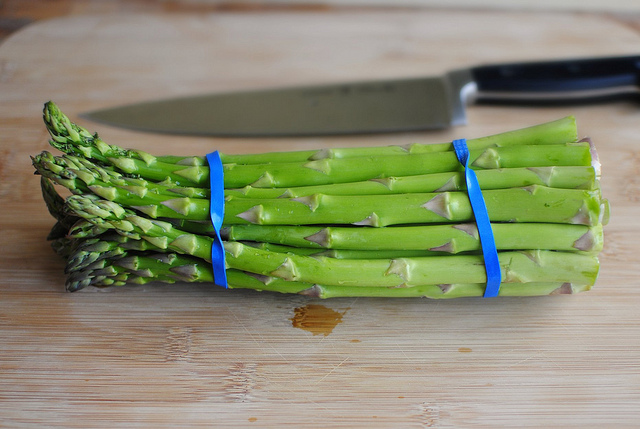 Wash and pat dry a bunch of asparagus. 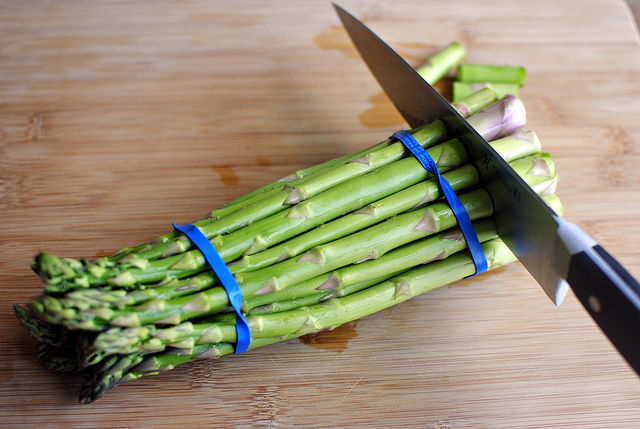 Trim off about an inch off of the ends {it’s the tough part} and just set aside. 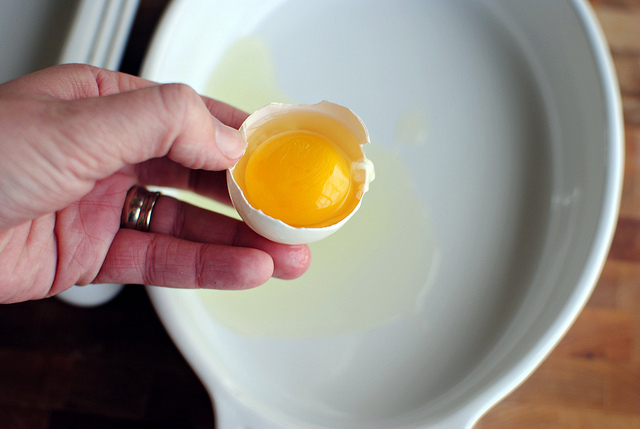 Separate the yolk from a couple of eggs and reserve the yolks for another purpose, like homemade mayo! 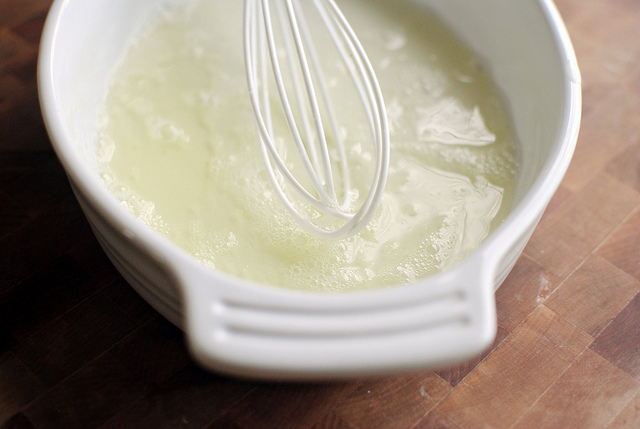 Whisk to break up the egg whites a tad and move this dish off to the side for a moment. 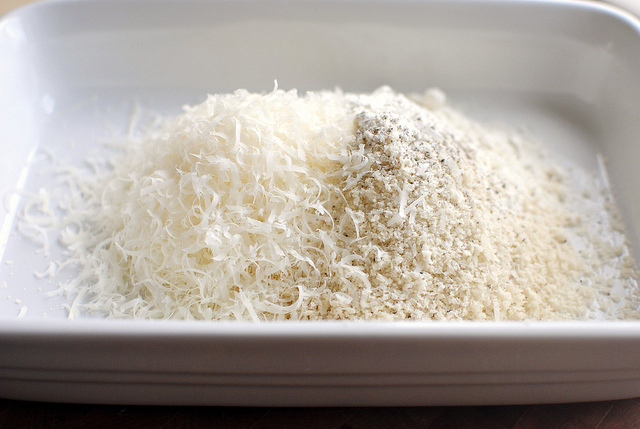 Add in the Panko, flour and Parmesan cheese. The only thing I would maybe change would be to use finer grated Parmesan. But hey… you live and you learn, give it a stir and set it aside. 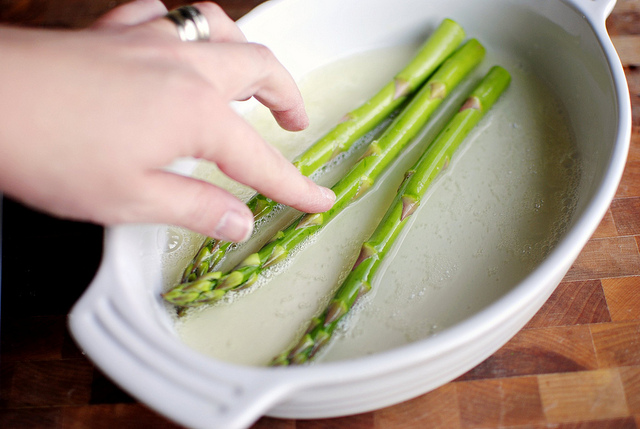 Roll the asparagus around in the egg whites to get them coated. 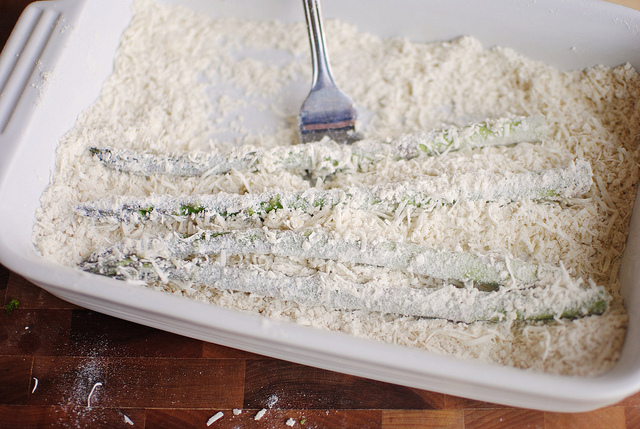 Drain off any access and roll them around in the dish with the Parm and Panko. 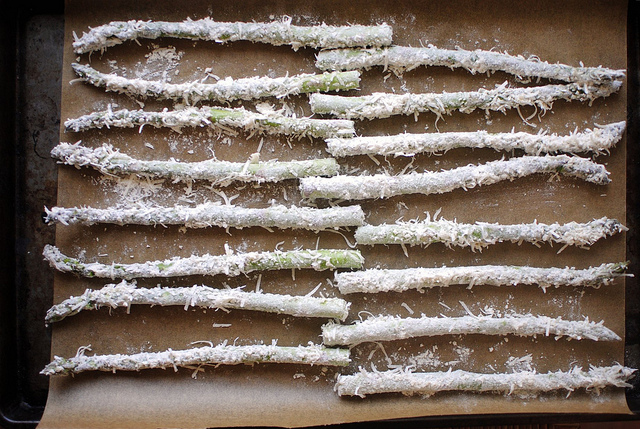 So here is where you can probably understand why you’d wanna use the finer grated parm. Ps.  Is it me or do these asparagus look like they could use a shave, no? 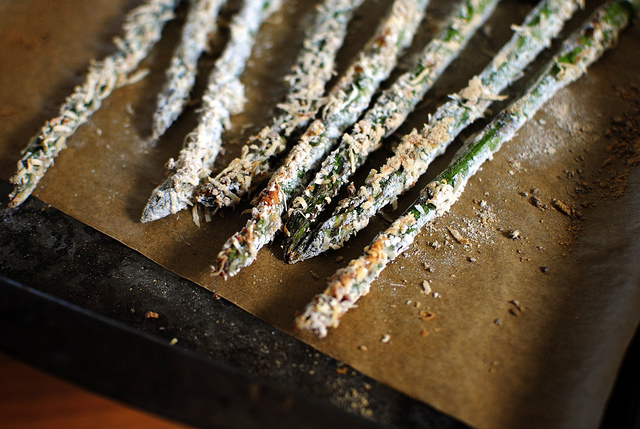 Bake in a preheated oven for 15-20 minutes, turning them half way through the cooking time. You’ll want to serve these “fries” warm, so making the mayo ahead of time is a swell idea. 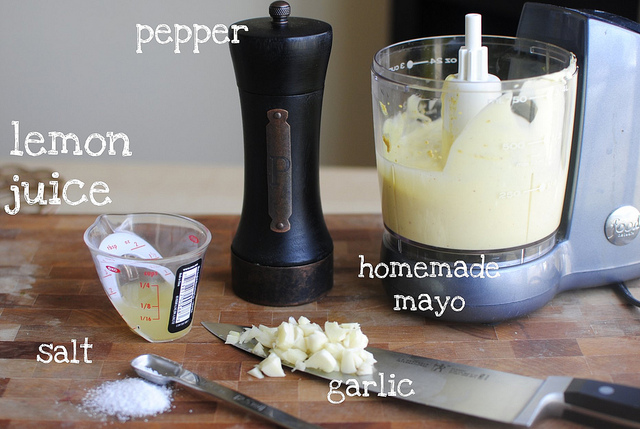 Did I just say make your mayo ahead of time?? Yup you guessed it… we’re making mayo from scratch! Yeeee-ah! So excited for this one! After your first experience in mayo-making you’ll be making mayo left and right and you’ll be able to tell which restaurants use real-REAL mayo and those who doesn’t… because nothing compares to a from scratch mayo. NOTHING. 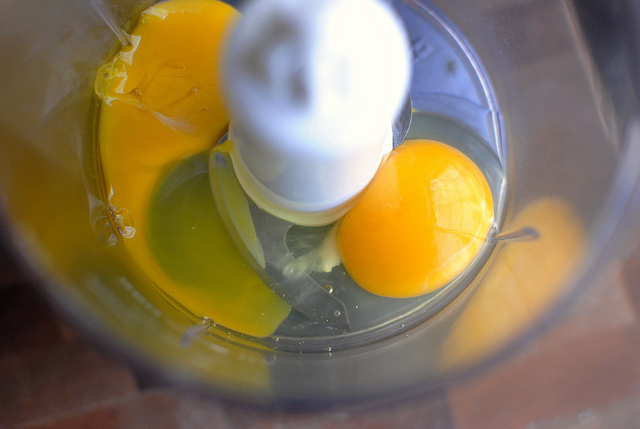 To start this out you’ll need one whole egg and an egg yolk. 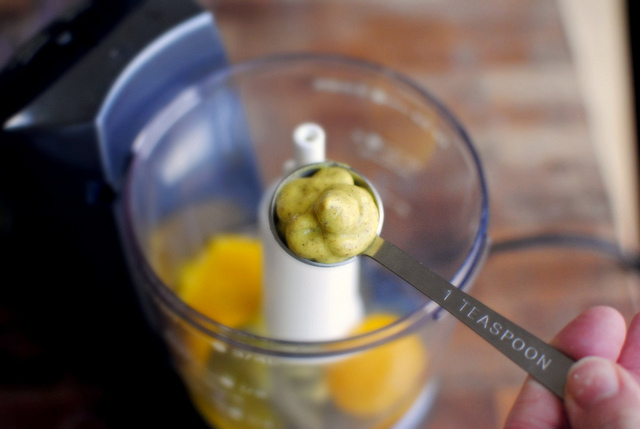 Add in a teaspoon of brown mustard, regular old yellow mustard would work too. 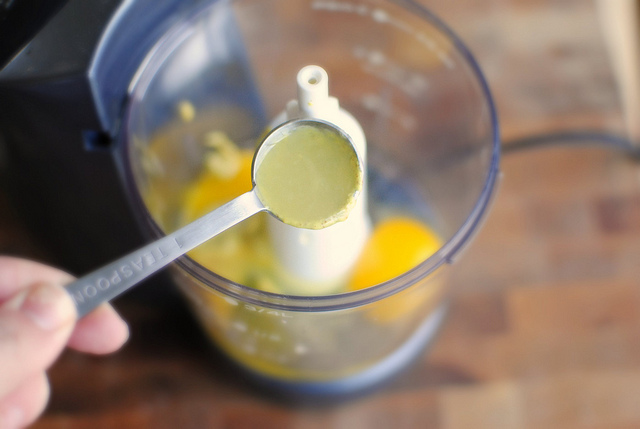 Place the top onto the processor and turn it on high. Slowly, and I mean S-L-O-W-L-Y stream in the grapeseed oil. Until everything emulsifies and thickens. Pouring the grapeseed oil too fast could result in disaster. So take your time. 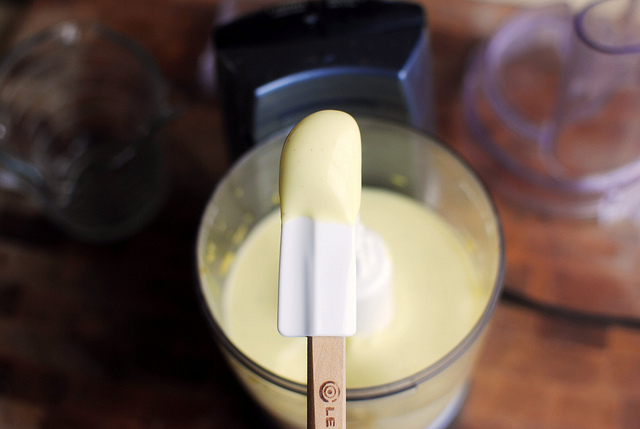 After the grapeseed oil has worked its magic with the egg yolks you have the best mayo of your life. It’s thinner than what you’ll find on the shelves, and I prefer it to be that way. If I was to stop here I’d season it with salt and pepper, but we’re not stopping… ohhhh noooo we’re not. 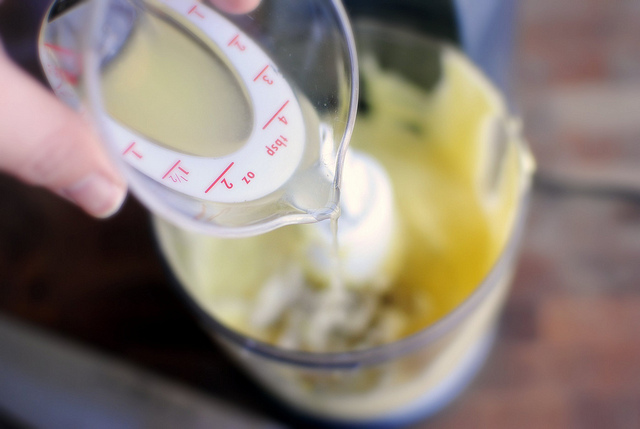 To turn this mayo into a lemon-garlic aioli just add a two more tablespoons of lemon juice. 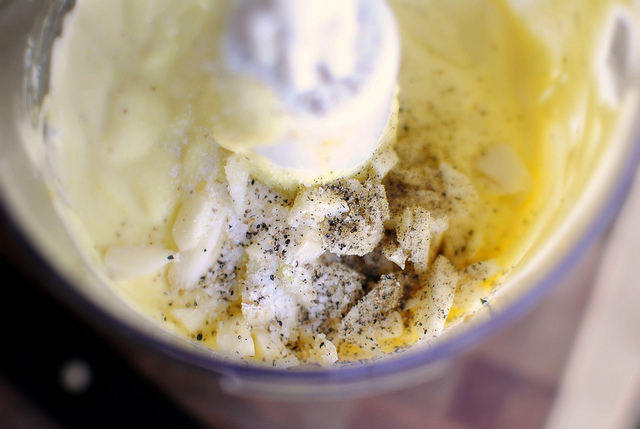 Then toss in two peeled and roughly chopped cloves of garlic and a 1/2 teaspoon kosher salt and black pepper. 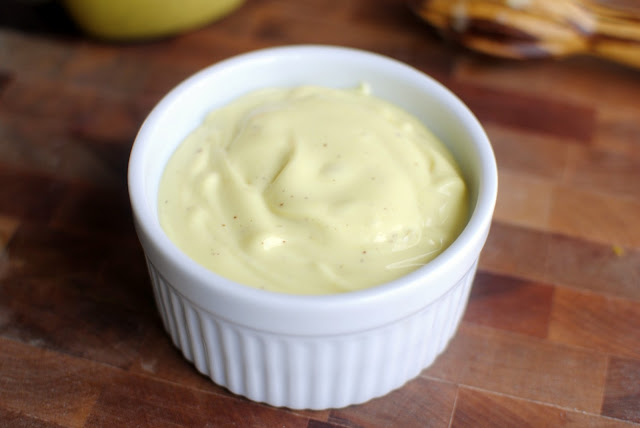 Store it in a glass jar or airtight container and refrigerate for a few hours at least, but over night really is best. I could drink this stuff… for reals. 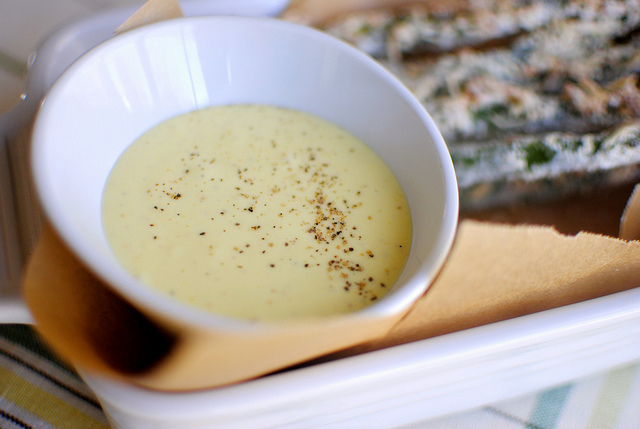 But I wasn’t waiting, so I spooned a little aioli {say it with me AY-YO-LEE!} into a small dish for dipping. 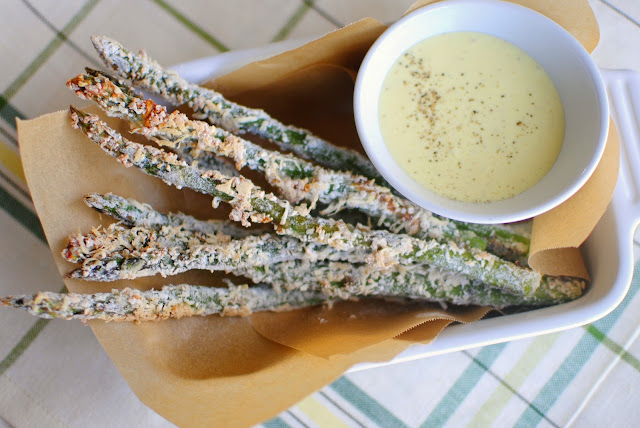 And serve along side of a few baked asparagus fries. 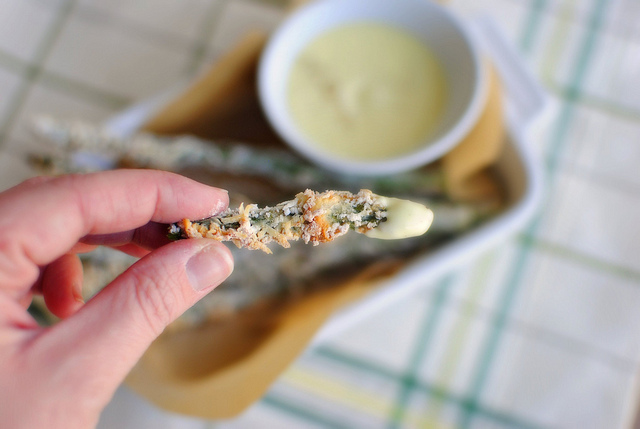 Would you believe me if I told you I ate all 23 baked asparagus fries? Because I did. Oh yes I dee-ed. Crispy, crunchy and that aioli is amazing!

This post was sponsored by Frigidaire. When you check out Suzanne Goin’s springtime recipes at www.maketimeforchange.com, Frigidaire will donate $1 to Save the Children’s U.S. programs. Plus, you’ll be entered for a chance to win the new Frigidaire Range with Symmetry™ Double Ovens– featuring two large ovens (that can each fit up to a 28 pound turkey!), providing the flexibility to cook multiple dishes at the same time at different temperatures, so you can get more on the table at the same time.

Enjoy! And if you give this Baked Asparagus Fries recipe a try, let me know by snapping a photo and tagging me on twitter or instagram!

FOR THE ASPARAGUS FRIES:

FOR THE MAYO & AIOLI:

For the mayo & aioli:

*you will also need a mini or regular sized food processor